Chekhon is a fish that keeps in large flocks and lives in many regions. Even in Siberia, you can catch it. Unfortunately, there is not much information about fishing in the Far East, but it is likely that it is there. 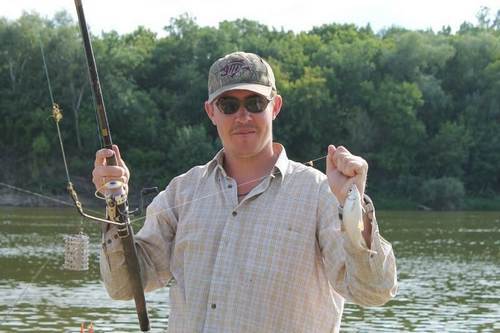 Usually the feeder is associated with catching bream, crucian carp, roach. These fish have a settled habitat and are caught almost the entire year. Catching sabrefish is mining, fascinating, but slightly different from traditional fishing.

Appearance of sabrefish resembles bleak. It has an oblong body shape and a mouth turned upwards. Its size reaches half a meter in length and weighs about two kilograms. However, the usual catch of an angler is fish weighing no more than a kilogram, and more often – half a kilo. When capturing even a small chekhon has stubborn resistance.

The nature of this fish is fundamentally different from both bream and carp. For almost the entire year, it is kept in the upper and middle layers of water, and rarely picks up food from the bottom. However, with the arrival of winter cold, the sabrefish goes to winter habitats, where it falls into large flocks on the pools and pits.

Prefers to keep in clean places, not overgrown with aquatic vegetation. He loves the sandy and rocky bottom. Usually catching it occurs on places with a strong current. Keeps flocks, their size depends on the time of year. In the school there is a fish of approximately the same size and age.

A distinctive feature of sabrefish is the spring and autumn course. For example, catching on the feeder chekhon in September in Astrakhan traditionally gathers a lot of fans and is very tempo. Of course, in the lower reaches of the Volga, catching fish is not a problem, but in other regions you can fish it successfully by pulling a fish every five minutes. The main thing is to find a good place to catch, to choose the right equipment for catching sabrefish on the feeder and find out when exactly here will be the turn. Usually it lasts about two weeks, so do not yawn and seize the moment.

When catching sabrefish need to pay attention to the following

Fishing will be carried out with rather heavy feeders. If the bottom is rocky, the feeder should have a smooth, streamlined top shape to slip out of the hooks between the stones and pass the bottom. If sandy – significantly help small legs on the bottom, which will keep it in one place and allow you to work with smaller weights without demolition. However, sometimes, if you are lucky enough to catch without a current, you can put not very large cargo.

The rod should correspond to the weight of the drop feeder. Usually, fishing occurs at a short distance, so it is worthwhile to stop at the feeder for catching sabrefish with a fairly large dough, of medium length. The tip is to choose coal, quite tough and durable with a large dough, from three ounces. It is very easy to distinguish the sabrefish, and there is no need to diminish here, it takes true. And the ember will allow to work even on shallows with jets without problems. Unfortunately, these tips are not very cheap.

Rod reel is usually rarely chosen specifically. Usually content with what is already available. The main thing is to have enough tractive effort that can pull a heavy load over the stones without problems. Good coils of sizes 3000 and above handle this. If you choose separately for this fishing – you can recommend Daiwa Revros or something like that.

Fishing line or cord? Definitely worth the choice in favor of the cord. It will show itself well on the course, will help in the registration of poklevok, will smooth the influence of jets on the vibrations of the quivertip. The fishing line will be very sail, stretch. When pulling out a load with a cord, it is easier to pull it up and hold it above the cartilaginous bottom, where it can get stuck. With fishing line his stall and takeoff will be slower. For the same reason, you should not use short picer sticks, despite the high rate of catching – it is easier to break the load with an average or long rod from three meters.

Hooks are important for fishing, as they must be attached not only to the rig, but more on that later. They should not have a very big mouth. The lips of the sabrefish are thin, and even a small hook can penetrate them. However, its shape should be in the form of a question mark. This is convenient when catching fish with this shape of the mouth and lips, gives less gathering, the fish later recognizes the presence of a hook and hooking occurs more efficiently. Handguard should be long enough.

Place of fishing and bait 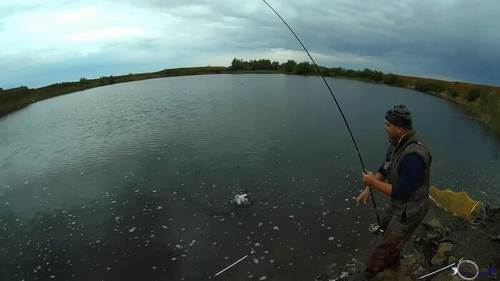 Fiderista used to probe the bottom well and make a good starter feed when fishing. Catching sabrefish breaks this stereotype. The fish goes to places of spawning in flocks, and rarely lingers in one place for a long time to eat food. In the periods of summer, when the sabrefish spawn, the poklevki are rather random. It diverges in the reservoir and there is no sense in catching it purposefully – there are more chances to catch other fish.

Here is another point. A feeder is a tackle that is intended for fishing from the bottom. However, sabrefish holds in the polvodvoda or near the surface. How to catch her feeder? You just need to find a good place with a shallow depth where the jets of water are mixed. Usually it is on fast rifts. Food in such areas will not last long, and the feeder here plays a supporting role – to exude a large number of smells that will attract the attention of a passing bevy and allow you to catch one or two fish from it.

All options with abundant starter zakormom will not work here, as well as keeping the same point for fishing.Usually on the river it is important to find the correct distance from the shore where the fish passes, and to catch there. Another thing – in the river deltas, where sabrefish is knocked down in large flocks before spawning.There it makes sense to make a starter zakorm, which will allow the flock to linger, and it will not be washed off by the flow in half an hour. And you need to throw in the place where it is made. But most anglers catch on the rivers.

The feeder should be of medium size. Too small – bad. From it, the feed will be quickly washed out, and you will have to reload often to fill it again. Big is bad too. It gives an unnecessary overrun of food and is strongly carried over. Usually the ideal size of the feeder is when the food is almost completely washed out of it, and then the fish bites. It is better to have in stock a few feeders with sufficient ogruzkoy, but different volume. When the fish is caught, but there is still food left in the feeder – this is a sign that it is necessary to change it to a smaller size.

Type trough matters. Metal nets showed themselves best in such conditions. They immediately begin to give food in the fall, which allows you to attract fish from long distances and quickly reach the bottom due to its own low buoyancy. Chebarukovki and other troughs with a large wall area will not be very good for sabrefish, since they deliver most of the food to the bottom and leave little of it in the fall. You can also recommend the use of springs – feeders, well known in the ground dressing. They get rid of food perfectly during the fall. But here they will keep the bottom is not perfect, so put them better in the middle course.

Since fishing takes place away from the bottom layer, the question arises – how to keep the nozzle at a distance from the bottom? Fishermen have long found a solution – when catching sabrefish on a hook with a bait, they stick a small foam ball. Usually use packaging foam, which contains a sufficient number of balls. A small, corresponding to the weight of the nozzle is plucked from it, and at first they put it on, fixing it on the ear of the hook, and then – the bait. At the same time, the attachment will not lie still at the bottom, but rather be slightly higher.

The size of the ball should be chosen empirically. Often, even if there is a fish, it will take in a certain horizon, especially if the depth at the fishing spot is more than one and a half to two meters. It is necessary to select the size of the ball in order to keep it on this horizon.

This approach requires the use of nozzles of strictly defined weight. Chehon eats insects, bugs, worms that got into the water during high water. The perfect tip for her is a worm. But in view of the fact that it is quite difficult to pick up a certain weight of a worm in order to comply with the horizon of fishing, they use maggots. They have almost perfectly adjusted weight in brood. It is not known what this is connected with – apparently, with a schooling specificity of growth, when they all try to keep at the same level. On the hook after the ball of polyfoam, three are planted, less often – four maggots.

The leash with such fishing should have an impressive length – from a meter to two. This is to ensure that the nozzle floats in the water column. Of course, too long a leash will lead to the fact that the fish, attracted by the smell of bait, will pass by the nozzle. Therefore, it is recommended to choose the length of the leash at the fishing spot, starting from a long one and gradually shortening it, while simultaneously selecting the weight of the foam balls until they catch the bite of the fish.

It is quite simple. Here it is not the place of fishing that matters, but the time chosen for fishing. Chehon is a commercial fish, and you can learn from local fishermen when it goes to spawn. Where its commercial fishing is allowed at this time, it is usually possible to catch at the feeder.

For fishing chosen straight sections of the river with a hard bottom, not overgrown. Too deep and wide rivers for fishing by a feeder will not work – there the Chekhon walks at a great distance from the bottom, and it is easier to achieve success using float tackles from a boat or a tyrant.

When fishing on the feeder, it is advisable to find a place where the river in the middle has a shallow depth, about two or three meters, and catch a little closer to the shore. After finding a place with a comfortable depth, they throw the tackle and begin to catch it. The passing fish does not linger in one place, so there’s no point in looking for where there is a lot of it – you can safely sit all day without going anywhere, it will come by itself. Or will not come, as lucky. Selecting the weight of the feeder, the length of the leash, the weight of the foam and the number of maggots on the hook, slightly changing the casting distance, find a combination in which bites of sabreas will go as often as possible.