Not so long ago, anglers began to use leashes for spinning gear and on vents; Prior to this, the capture was carried out on a thick fishing line, folded in half, over the end of which the bait was tied. But progress does not stand still, in our days they try to put the basis for collecting gear as thin as possible. However, they try to leave breaking loads decent, a new fiber – a braided cord helps in this. The disadvantage of this material is that it can be easily eaten with pike teeth, and it is very noticeable in the water column.

In order to secure the base and attract the attention of a cautious predator and began to put leashes, fluorocarbon on the pike has been especially popular lately. Beginners are not quite clear what it is and what features the material has. Next, we dwell on this in more detail.

Fluorocarbon is an artificial material created in a special way so that when light is refracted in water, it remains almost invisible. The fluorocarbon leash has advantages and disadvantages: 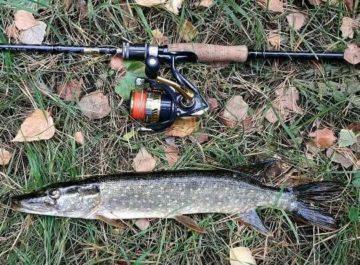 Fluorocarbon leashes have another big plus, they are almost not affected by ultraviolet light. They perfectly tolerate a sharp change in temperature, not be afraid of sub-zero temperatures, nor heat, so they are increasingly used to collect gear not only for predators.

Fluorocarbon pike leashes can be purchased in the retail network, and both beginners and anglers with experience can easily get confused in the subspecies of the product. There are several options for a pike leash, each of which will differ from a fellow, albeit not significantly. Thickness will be an important criterion; the larger it is, the stronger the product will be. Next, we dwell in more detail on the popular leashes of this type.

This fluorocarbon leash is the most common, you can buy it or make it yourself. The name speaks for itself, the product consists of one vein of fluorocarbon. As a rule, the swivel and the fastener are attached to it through a loop of the same material, and the installation is fixed with a crimp tube.

Important! With a small diameter, products of this type are also used for ultralight gear.

Depending on the thickness of the material used, the finished product may have different breaking loads.

Fluorocarbon leashes of this type are made from woven lead material, they are distinguished by increased strength. It should be understood that the diameter of the wicker version will be significant. 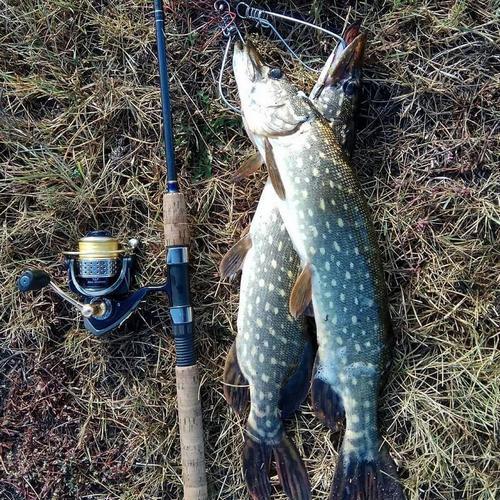 A wicker look is used both for spinning gear and for fishing for lapdogs in winter and summer.

This type is done independently without the use of additional accessories. Twisting is called due to the fact that a piece of fluor is simply tied to the base, and on the second end the bait is fixed in the same way tightly. This option is suitable for large artificial baits, namely vibrations.

Such a fluorocarbon leash for pike is made by folding two identical pieces of leash material, a fastener is mounted on one end, and the second is equipped with a swivel. A crimp tube is used for the connection, while its diameter should be twice as large as the cross section of the fluor itself.

Such a product is used more for ice-filled ice-holes on the first ice, as well as on snacks in late autumn.

These types of leads are in demand in the distribution network, but homemade ones are not far behind. Typically, each angler knits a component of the gear independently, using only his known secrets.

How to knit a fluorocarbon leash on a pike for a beginning fisherman is not known, so many beginners turn to their comrades more experienced for advice and a visual aid. Some share their skills without problems, and some do not want to reveal their secrets.

We will try below to help you choose the lead material and learn the basics of mounting the product.

Before you begin to make a leash on your own, you should determine the length, choose it based on the bait used, season, topography of the bottom of the reservoir.

General characteristics are as follows:

Catching on a diverting lead will make its own adjustments, there sometimes a piece of 50 cm is not enough.

Which fluorocarbon to choose for pike leads? What diameter is best able to cope with all the tasks? It all depends on the inhabited specimens in a single pond, as well as the baits used. Too thick material will not allow the bait to appear in all its glory, which means that it will not always be possible to interest a predator.

The subtleties of choice are:

When choosing a thickness, it is worth considering the potential catch, if large specimens live in the reservoir, then it is better to choose a thicker material on leashes so as not to miss the trophy.

Today, the popularity of fluorocarbon for pike leads is very high, so almost all well-known brands produce it. On the shelves of any store you can find several manufacturing companies, which one to give preference? Who will have the highest quality material?

It should be understood that options from unknown firms with a low price will not be able to differ in quality, fluorocarbon material is not cheap.

Each of the above options is used by more than one angler, passed independent testing by many amateurs and professionals. Use for the independent production of leash materials of these firms are recommended by many fishing sites.

How to make a leash of selected material? What is needed for installation? How to carry out the work?

First of all, you need to stock up on the necessary components, to install the leash you need:

The whole process will take very little time, it consists of the following steps:

It should be understood that the fluorocarbon in the crimp should be placed three times, therefore the diameter is chosen accordingly.

Fluorocarbon leashes have only positive reviews, but still there are a few tips and subtleties that every angler should know for successful fishing:

A carbon leash for pike fishing has been used not so long ago, but has already managed to win its supporters. With its help, it turns out to offer and hold the bait without frightening off the cautious predator.

Each fisherman collects pike tackle in his own way. Previously, they completely dispensed with additional components, now almost everyone uses innovations that allow you to save tackle in critical situations. Such innovations include leashes for catching pike, their use often increases the amount of catch. For leashes, different materials are used, among which fluorocarbon stands out.