At first glance, catching a pike in January is very simple, especially in frozen ponds: I drilled a hole where I liked it and lure it. But if things really were like that, then everyone would have had an excellent result after a fishing trip. However, often things are exactly the opposite, inexperienced anglers often remain without trophies. There can be several reasons for this, but solving the problem can only be by applying useful advice from more experienced comrades. 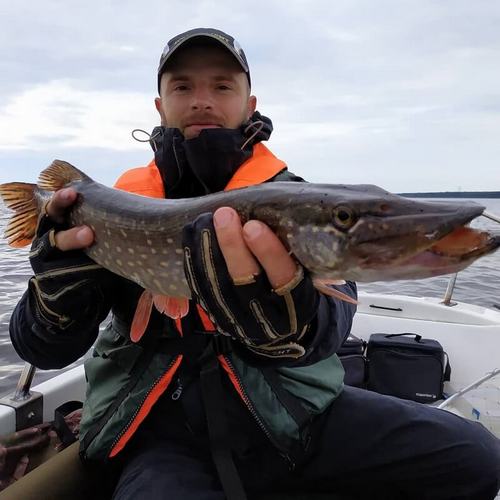 Predator fishing in rivers and lakes is carried out throughout the year, however, for a successful outcome, it is worth knowing and applying some tricks. In January, pike sometimes very willingly react to the proposed baits, but there are times when nothing can interest her. We will find out all the subtleties of catching a toothy predator in the middle of winter further.

To always be with a catch, you need to know where to look for a pike in January and what bait to offer it.

In addition, there are such features of capture:

It is better to catch pike from the ice starting from the center of the reservoir, as experienced anglers recommend. It is necessary to drill several holes at once, each of which is located 6-8 meters from the previous one. Having drilled the concluding roundup, they start from the first, while each one needs to stop for at least 20 minutes .

Where to look for a pike in January, we already told a little. But it is worthwhile to understand that in many ways the predator’s parking depends on weather conditions.

When the pressure normalizes, the pike pecks perfectly, for this it is worth catching such places:

In shallow water , it is useless to look for a pike in the winter , at this time of the year it will prefer places with a sufficient amount of prey.

If the weather is not stable, pressure indicators are constantly changing, fishing in January is better to postpone until better times.

Many modern devices are now used to search for fish parking, their cost is decent, but the efficiency is very high.

In January, fishing is carried out from the ice in most regions. Low temperature also reduces the activity of fish, which is why tackles are made thinner for winter fishing.

Collect them starting from different types of fishing:

An important point is the choice of basis, for this a special fishing line with the designation “Ice” is suitable. You can also use the cord, only preference should be given to options with anti-frost treatment or to spray the spray on such a basis yourself.

In January, a pike is caught on a cord for different lures, the thickness of 0.08-0.12 mm should be maximum when forming any tackle.

In January, pike are caught most successfully by female zharlitsa, it is this tackle that will bring the greatest results. Experienced anglers argue that in this way, in most cases, they prey on trophy specimens of a toothy predator.

There are a lot of varieties of girders now, most often they catch on such:

Their components are usually the same, the ventilator consists of:

A fishing line is used as the basis for the girly, it is not necessary to put too thick. The best option for this will be 0.3-0.35 mm, the use of a leash is required. In winter, it is preferable to put thick fluorocarbon or steel .

Sinkers are used moving, pick them up depending on the bait and depth in the selected reservoir. Usually enough 6-8 g, and they must be locked with silicone stoppers.

Many people make the base themselves under the girly on their own, but it’s easier to buy a bottom and a coil attached to it on the holder and a flag.

Particular attention is paid to the hooks, for mounting live bait, which will be the main bait, you can use single, doubles or tees.

For other popular lures, standard winter fishing rods are used , they are equipped with thinner fishing lines.

This type of artificial bait for pike fishing is used in winter and spring. Caught by balancers mainly from ice.

To choose a tackle for this is simple, you will need:

Fishing is carried out at the wintering pits, the game is attached to the bait different:

It is important to understand what type of game attracts pike in this reservoir right now and continue to lure in the same way.

The color scheme of the bait is very diverse, in the arsenal of the angler should be acidic, and options with sparkles, and more natural colors.

What else to fish for pike? What baits will attract her attention under the ice? Spinners will help to catch a predator if it is available in a reservoir. Vertical versions are most popular, and trihedral models work especially well.

There are a lot of varieties of spinners, the most popular among experienced anglers are the mastermaster, you can catch them all year round. It is desirable to equip it with a quality tee through the winding ring.

In addition, homemade versions are often used on ponds, the manufacture of which is often kept secret by craftsmen.

This type of bait is referred to as wobblers, the peculiarity is that they do not have a shovel. The equipment for them is going to follow the example of the balancer, but they don’t always put the leash on.

You need to play rattlin in the same way as a balancer, only sharper. This bait will work best on the river, in still water the effectiveness is much lower.

Some ponds tend to not freeze in the winter , fishing on them occurs with some differences. Where to look for pike in such reservoirs? How and when will predator fishing bring success?

In January, a spinning rod is used to catch pike in ice-free water bodies.

Since fishing is carried out from the coastline, the characteristics of the form should be appropriate:

The coil is placed with a spool size of 2000, then a sufficient amount of cord is wound. Casting is carried out as standard, but the wiring is uniform. As the bait, use silicone, rattlin, a small wobbler, oscillating baubles.

Now everyone knows where the winter pike is located and how to lure a predator in January. Even a novice fisherman can easily attract attention both when fishing from the ice and in the open water of a toothy resident of a reservoir.