Rudd belongs to the family Cyprinidae. In different regions it has different names, among which the most common “red roach”, “Bursch”, “Redwing”. The area of its habitat in Russia – the rivers and lakes of European Russia and Western Siberia. This fish is one of the first to delight of fishermen active cool immediately after the gathering of ice from the ponds. Fishing for redfin in the spring has its own characteristics and is able to bring a lot of pleasant experiences for every lover of fishing during this period. 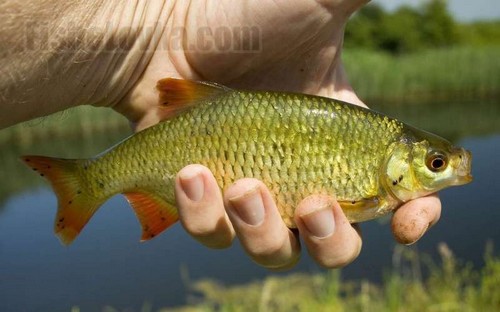 Seasonal behavior of fish in the spring months, Parking

Rudd aktiviziruyutsya with floods and are often caught in places of flood of the rivers, on flood plains, under trees and bushes, caught in the water. In such areas the water warms up faster, plus they are full of worms and larvae washed from the land or caught in the stream with crumbling shores. Sometimes along the pond, even should the spring ice, and under ice, a few meters from the shoreline, you notice a school of fish.

After the disappearance of melt water, they are choosing shallow places with slow current or none at all. Here fish are holding closer to the bottom, eating bloodworms and aquatic vegetation. Periodically, they rise to the surface in search of fallen insects. At this time they can be caught at different horizons, changing the depth of fishing.

Authoritative source notes: “She is constantly kept at intermediate depths, in the grass, more in the reeds, especially at a young age, does not like strong currents and fast rivers, even not found” (Sabaneev L. P., Life and catching freshwater fish. Rudd).

Spawning fish takes place in late may or early June (depending on region), when the water warms up to 15°C. Therefore, almost all spring she actively feeds, gathering in flocks and surveying coastal waters, where the depth is 1.5 m.

When the ponds are overgrown with algae and water lilies, these areas become favorite places of Parking of fish. In the Windows between the vegetation catching roach, Rudd is particularly successful.

In the course of fishing for Rudd may be used a variety of gear, works like bottom, so at high water or at the surface.

Each of them can be particularly effective in different spring months (this will be discussed in the next section). The catching efficiency of the gear depends on its correct Assembly, which has its own characteristics for the specific type of fish.

As bait or nozzle popular:

Use with a float rod

In early spring the first fish are best to catch on float tackle. A slight flapping of the rod to provide tension for the owner to carry out catch, drifting on the water and making many casts.

Extra long rod is not needed, since fishing will take place in the coastal zone. Enough length to 5 meters. It is recommended to use fishing line diameter of 0.14-0.16 mm and light floats. You should not use large hooks, it is enough to set No. 5 or No. 6 on domestic classification.

But the redfin fishing in the spring on the float rod is not only limited to light tackle. When the water returns after the floods in the border of the pond, the perspective of space can be at a considerable distance from the shore. Now you may need long casts, so the fishing gear “heavier”:

Attention! This snap-in will require a heavy shipping, so you will need a long leash (fishing line 0.14 mm) below the sinker would not scare away the fish due to its proximity to the bait.

Fishing with feeder tackle for Rudd becomes effective when the water warms up quite well. This is due to a feature of the method of fishing is the presence of feeders with fragrant bait. In cold water sharp odors give the opposite effect: instead of luring scare away the fish.

A condition for the application of the feeder is a dense bottom ground, excluding dipping trough in the silt. Another feature – will have to experiment with the length of leads. It is better to prepare in advance different lengths. This will help to reduce the replacement time fishing.

The disadvantage of catching Rudd on the feeder can be called the high probability of snags for aquatic vegetation. It is absolutely necessary, because this fish always selects the areas with dense thickets of algae. If the boat, lowering the tooling vertically, using a short rod, the trouble with claws will be less. As a signalling device when such fishing is better to use the nod.

Universal fishing gear, combining rod with a float snap-in work great in the upper layers of water. The tackle is as follows:

Tackle do not tend to hook, can be fed in at the Windows among aquatic vegetation. Posting is performed by short jerks, at which Popper its sounds and colors attracts the attention of fish as bait to provoke a strike.

When you start fishing for redfin in the spring months

As already mentioned, Rudd begins to be caught from early spring. In different regions during this period is different:

The water surface of large water bodies like Surskoe reservoir, located in the Penza region, is freed from the ice before the end of March.

In this period the fish are kept near the coast in the warmer upper layers of water. Working depth of gear is rarely more than 40-50 cm, and the perfect fishing tackle is the above-described centrifugal rod.

As a warm-up and disappearance of the water, the fish move deeper. By the end of April — beginning of may, the most useful can be a float tackle, designed for long-distance casting.

By the time of the rise of the aquatic vegetation is highly efficient becomes Pople Popper, at least the feeder. This period is most often pleased with the capture of large specimens.

Answering the question: how to catch a Rudd in the spring? – first of all you need to study the features of seasonal behavior of fish, tackle, the most effective specific pond and the preferences of the fish in terms of bait. This information will share any fisherman familiar with the pond.

Going to search redfin, you need to consider the fearfulness of this cautious fish. It is better not to create on the shores of the excessive noise and possible, use natural cover to the silhouette or the reflection of a fisherman is less moving on the water surface. For this approach the shadow of the coastal trees or shrubs.

Stumbling in the spring is favored by the fish place, it is possible for some time to catch her changing locations and baits. Rudd – schooling fish and is starting to bite, takes as long as it does not distract her attention or scare her off.

It is important to remember! Whatever the active was not fishing, you need to always remember that natural resources are not limitless. The principle of sport fishing: catch and release, always up to date, especially regarding fish under “marketable” size.

Rudd, sensing danger, always tries to go into hiding, so when hooking and playing need the control gear, so it is not confused in the grass. But jerks also not desirable in order not to break the thin lips of fish.

If it is not possible, gently remove the caught fish to the shore, use a landing net. This fishing accessory has to be prepared before the start of fishing.