Certainly, a few of you and your friends caught tench in large quantities. So, a few fish in the bycatch. And it is connected not with the fact that many do not know how to catch tench, but with his behavior. The Lin specific behavior, he often stands in one place and comes out to feed only at certain times and moves along a clear route. And while you do not calculate this route, to catch tench is unlikely to succeed.

In the winter to catch the Lin will not work, as it goes into hibernation and comes out of it in may (in some regions in April). It was while coming out of hibernation fish aktiviziruyutsya and begins actively feeding and strays in the pack.

Fishing for tench is starting to gain its momentum as soon as the spring sun is enough to warm up the water. In summer, the peak of activity decreases, and in the autumn again begins to gain momentum. If you delve a little further and talk about the time of day, the most acceptable is the early windless morning. 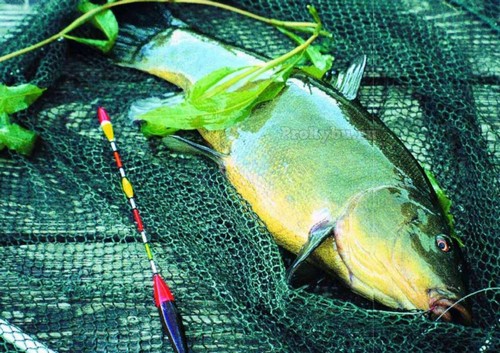 The success of fishing depends largely on the silence in the pond, and if you know how to catch tench, but still the roar and clatter on the shore will not help the fishing. Fishing from boats and from the shore. Very useful during fishing line from the boat to put it on Lily pads, so you will be able to minimize the noise.

The best tackle is the fishing rod. Other gear is also used, but rarely due to the fact that Lin prefers to take the bait a bit above the bottom. And apply the bait near the bottom only with a float snap-in. Used as one, and two rods long which usually does not exceed four meters.

Do not use a thick fishing line, it will be enough of 0.2 mm. to give preference to better pear-shaped floats with a long antenna. Hooks to catch tench made a separate class, and it is best to pick them in the color of the bait, enough rooms 10-12. With bait works best classic, is manure worms. The main thing that they were quite active, it is seen that stale bait Lin usually does not react.