Many fishermen in different explain the reaction of fish to sounds which publishes Kwok on catfish. Some say that tackle simulates the sound of a frog, and catfish painfully loves to eat green. Some say that positively affect the strokes of the oars through the water, Recalling the fish, the sound of the blades of the boat’s engine and as we all know, before the boat threw food waste, by which the fish just can’t swim. Sounds similar to malleable publish and ducks at feeding time, there are cases when the inside of the fish was discovered as ducklings and adults. 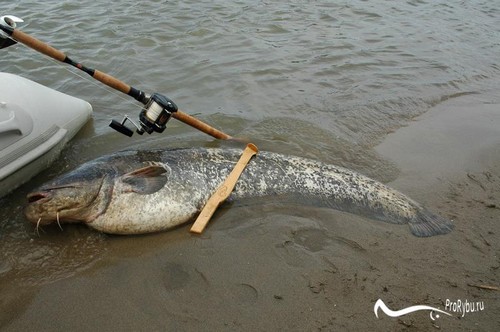 No doubt these versions are plausible, but many fishermen note that the catfish biting when fishing for ASP on the “pot”. When ASP goes to attack, then under his tail to hear loud splashes, but all the fish he can not catch the rest usually goes to soms. Like it or not, but you catch catfish on Kwok a long time ago. The principle here is simple, making sounds, Kwok attracts catfish from across the pond to himself, where he was waiting for a head dressed on the hook.

Kwok on catfish with their hands 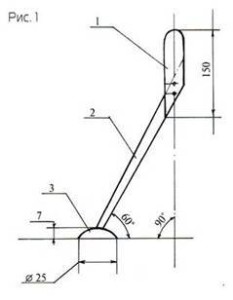 Kwok on catfish (Fig.1). Its main part is the handle (1), and the secondary keel (2) and heel (3).
It is necessary that the keel was quite hard if it gets deformed while fishing, catfish catch will be difficult. Because of this, the choice of materials for the manufacture of Kwok with his own hands should be approached with care and to give preference to hard materials.

Kwok on catfish stuff is not difficult. You need to cut the plate, the size of which is shown in Fig. 2, then secure it in the vise at an angle. To one end of the plate secure the bolt and make the shape then fill in with epoxy (as in Fig. 3). 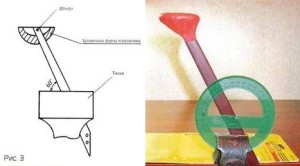 After the epoxy glue has frozen, the form requires you to remove and attach the handle to the desired size and shape. Kwok made his hands better to check in advance, in the bathroom for example . Testing the bait in the bathroom, the main attention is paid to the following recommendations. The sound of water arises from the fact that the heel drags the air, and he breaks the surface.

When you bury Kwok, the heel creates a balloon on the surface of the water, which is then broken. Try to give Kwok the rotation and vertical movement simultaneously. Hand is doing the stroke, and brush with thumb and little finger print heel to the surface. The less spatter will result from such actions, the better it will work Kwok.

The key to catching catfish are correctly selected weather. If your boat remains in one place, and for that we need calm, then you can get soma from any pit, even at lunch. The bait is recommended to not drop below four meters, regardless of the depth of the pit in your favorite fishing spot. When one of your hands moves Kwok, the second must be evenly moving the bait. Long to sit on a pit is not advised.