Rotan — small inhabitant of reservoirs, which sometimes can not survive other predators. Fishing occurs on the rod, spinning, imitation fish, other gear. As a rule, it is very affordable — does not require any costly or experience. To fishing was successful, especially in the winter, it is necessary to consider a number of factors. 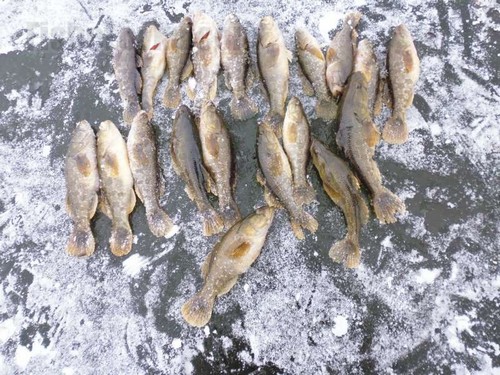 In March rotan behaves differently, depending on pond and weather conditions. If the pond full, and the level of oxygen in water is low, a lot of dead vegetation — is very passive. In the case where forage base in the reservoir is good, and the ice gets enough oxygen with melt water, rotan aktiviziruyutsya, and we can hope for a good bite.

In March, food is zooplankton, bloodworms, small crustaceans, the most favorite food of the juveniles of rotan. In ponds, like pikes, able to form stable long-term population consisting of one species, completely destroying all the others. Feeds in winter less than in summer. A typical day predator is inactive when under the ice does not get sunlight. This can explain the passive behavior in January, February.

With the approach of spring, the ice thickness decreases, the water gets more sunlight, fish aktiviziruyutsya. The adult begins to Mature the eggs and milt — it requires additional power. Live stems of vegetation under the water begin to give more oxygen. It also contributes to Zhora.

Unfortunately, rotan not schooling fish, like perch or walleye, and a loner, like a pike. Therefore, with a single hole for the fish to bite three or more copies per minute — an accident. However, if you return to this place in ten or fifteen minutes — you can catch a couple more pieces.

As shown by underwater photography, the nature of hunting in ambush Rotana. He stands in the water near the bushes face-up. When the head is bait, makes the throw and missing. After that, some time remains at the same position, swallowing the bait and then goes back to depth. It’s kind of like food of the pike, only the throws on the extraction of horizontally. But in March the stems are few, and the predator can change their habits.

Where to fish in March

The usual habitat is shallow ponds with oxygen-poor. In addition to Rotana in such conditions can only survive carp. This fish is absolutely not usual where there is perch and pike, which instantly destroy its population. By the way, this is a good way to get rid of it in the pond or to reduce the size.

The depth of the fishing location usually does not exceed five meters. The author is fishing near the house on the old clay pit at four, and there the fish are biting throughout the water column. Usually kept near overgrown areas, where the ice there are plants in the green phase of type hornwort. Where there is a lot of dead stems, rotan does not like to stand in the winter.

Promising is to recognize the two-meter sections, considering the thickness of the ice. Fishing from the ice Rotana in March here profitable. The depth is difficult to determine, because the bottom is filled with a thick layer of algae where lives and rotan. In shallow areas during summer, fishing is impossible — the water is turned into a continuous swamp of the suspension of hornwort and canadian pondweed to the surface. The latter is an invasive species and is a major cause of eutrophication of waters. After a long winter, the dead stems fall to the bottom, released the free space under the hole.

Where and how to look

The fish are biting with all areas of the ice. Given the nature of the reservoir, to fish near the bottom, dropping a bait at it, it is not possible — have to constantly pull weeds. The game lure you start from the top and gradually lowered to the point where it happens hook. After that it is freed from the grass, lift and continue the game near the edge of the plants. If no result — do the wiring up and down through the whole thickness. Rotan can be at any depth, and the bigger it is the harder it is to find, more time is spent on each well.

The methods of fishing from the ice

Before the ice went rotan is caught three ways:

The easiest way to do it. The lure is good because it gives you less of hooks, and lower it to the bottom even in the thick undergrowth if there is a small window. For fishing be sure to use the nozzle as rotan is responsive to the smell. You can use inanimate piece of chicken skins, bacon, Rotaru throat.

When using dead bait is very important to choose the game. For live game is often optional — if worm, bloodworm or maggots actively moving on the hook, they attract fish and so. Use baitless jigs inefficient — even on a small edible piece of rotan bite is better than the most skillful game.

When fishing a large number of drill holes. The distance between them can be less than two meters — one will bite, another will not. At the beginning of March for fishing on the pond Rotana razvarivaya promising field. If there is a bottom prey, the predator will catch after a couple of transactions, to sit a long time there is no need. After bite is a bit of a wait, and then strike.

Mining — rotan different caliber. Can come across as instances of a finger, and a huge fish on the shelves. However, most bite small. For the target of catching a large is to use large jigs and better — catching the lure.

When fishing Rotana is just a larger jig, capable of quickly attracting the big fish. Prefer to use soldering. They have less hooks, as fall sting up. And better spot fish. The single hook is used, the main thing is big enough. The jaws of the predator is very solid with small grater sharp teeth, lips almost there.

As for the jig, it is better to provide a hook attachment. Its size should be much smaller, or violated the game spinners. It is best to catch all sorts of gozdawa spinners. With the bait on the hook the game is transformed — it becomes more planning on the fall, as a worm or chicken skin act as a small sail, possessing the buoyancy and resistance in water.

The game comes with long pauses, almost balance. In winter, Rotana have more time to aim at prey and have a shot, as the fish is acting very passively. Catch not long to wait, if the fish is under the hole. Almost immediately while the spinner below should bite. Pause two to three seconds and strike.

Balance weights are rarely used, since very zatsepistye. However, the ability to collect fish from larger and faster to call a strike. The lower rack it is advisable to put a single chain, protecting his bait, and the front and rear can all take a bite — rotan they almost never get. Room choose the smallest. Play near the surface, gradually lowering to the grass and back up. The pause should be long.

The easiest and most profitable method of fishing, although not very athletic. Zherlitsa here is slightly different from the one that put on a pike. You can use the live bait. But it is better to do otherwise. On the hook put a bunch of live maggots, worm, throat, chicken skin. After rotan grabbed the bait, he stands in place, and when the fish leaves — usually without surgery not to remove.

So you need to do the weakest pockets, still here no bait and he will not pull the line. Usually fishing the entire surface of the pond razvarivaya and set imitation fish at a distance of about five meters. I have to catch when triggered check box to run quickly and do the cutting while rotan has not gone far and not swallowed the hook. Vacation doing little to lure was clearly visible.

When the ice disappeared

After that, the spring fishing classic continues. The bite is becoming more active, reaching a peak in may-June. Traditionally caught on the float, spinning, summer jig. Fishing with bottom gear not applicable. In the spring of grass is much smaller, so fly fishing is much more comfortable than in the summer.

Prior to catching, we need to put thick fishing line and a large hook. This scaffold is needed for pulling out of snags. Nevertheless, it is necessary to take care of a good registration bite. If you make the trip prematurely, the trophy it will go and then won’t be caught. And if late, will have to mess around taking off fish. It is therefore necessary each time to take the extractor. If not, a rough tackle will allow you to simply pull the throat, which then you can put the bait and catch.

Attention! For trolling use a nod. The bite is expressed in the rise, knocking almost there. For this reason, be sure to put it on the jig.

Occurs in may-June. Females are the largest members of the population during and after inactive, but sometimes polevault. Males guard the eggs and caviar are well caught on the horizontal wiring rubber spinning.