The best season for hunting carp is spring. But as this fish is widely distributed in Russia, almost anywhere, the start time of the fishery differs from region to region. For example, in the latitudes with cold and long winters, the carp in this period of sleep, and in the southern areas it can be caught almost any time of year (especially where water does not freeze).

In the spring, when the ponds start to warm from the sun, crucian carp begins to move away from hibernation and are slowly showing interest in food. As plant food in this time a little (everything just thaws), carp great takes live bait (worms, grubs, maggots). 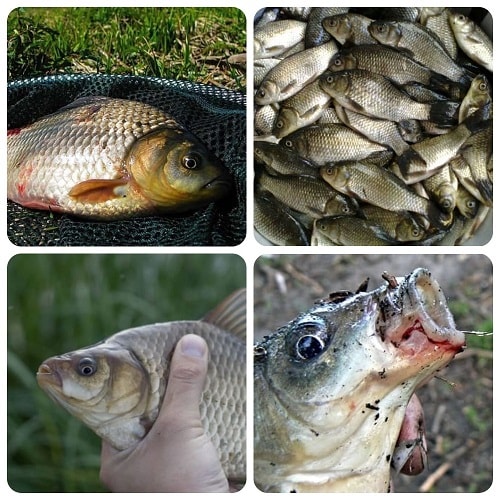 In the summer it is better to use plant food (dough of different cereals, semolina, peas). During capricious, lazy and sluggish carp bites are advised to use leashes and bait you to add sweet scents: vanilla, honey, or use the hemp oil. This will increase the probability of successful fishing.

With the onset of autumn carp starts storing fat for the winter, comes the autumn feeding period. This period is very short (the last week of September — early October), and the main thing is not to miss the moment. During Jora fish bite pretty often, and the use of a large number of rods is impractical, you simply will not have time to follow them.

In winter carp can be found only in the ponds of the southern regions, where water does not freeze. But even in such conditions it will be difficult to catch, due to the sluggish state.

In angling it is important to not only the time of day and time of year. This fish is not like either the cold or heat (and especially sudden changes from cold, rain or thunderstorms). If the morning weather was suitable, but later it turned to rain, then wait for a bite is not necessary. In spring and summer the best time to go fishing for carp is the period from dawn until dinner. In the night time bites are almost there.

Selecting the type of rod will move to the tactics of fishing. When using the flight feathers of the rod does not fit skarmlivanii large balls of bait. It is better to use smaller balls, without creating unnecessary noise in the point of fishing. To hold the carp in place of fishing, should be from time to time to lure point, tossing small lumps of food.

When fishing the match method determined by the perspective point, where in the opinion of the anglers is carp. Use a marker rod, exploring the bottom, which you can find difference in depth, gradients, kerb and coquina. This is suitable for any spinning its size and price don’t matter. It is equipped with a spinning reel with a fishing line thicker.

Further mounted weight marker (it looks like a hedgehog, with departing from it branches). After a promising location was found, you need to feed it 5-6 balls of solid foods. Once the optimal depth is found, set the float, baited with the bait and make a throw.

How to prepare tackle: buy or make your own hands

No matter, you must acquire the fishing rod in the store or build it yourself. You can buy bait and tackle separately mounted at home. There are no flaws in any of the above methods.Each purchased or assembled the rod should be configured.

Carp — fish with character, so treat installation seriously. So I advise you to track and pay attention to trends in float fishing. In stores there is a lot of interesting ready-made montages and baits for carp. Many of them are blessed on our portal.

How to find the Parking lot carp 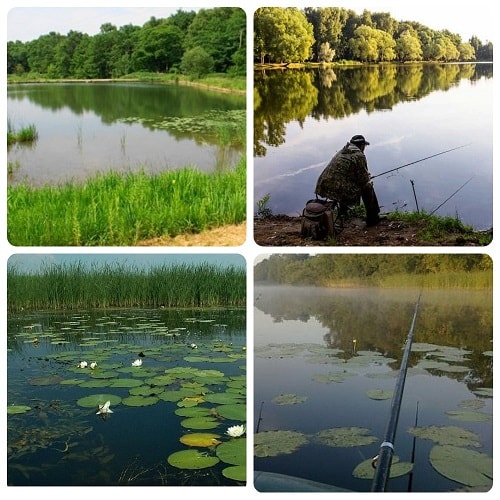 Ponds of stagnant water with live carp, are divided into: those in which this representative of the carp behave freely because of the lack of competition. These distinctive small ponds and deep with a silty bottom. Significant instances there are extremely rare but small carp willing to bite on different bait, accounting for the bulk of the catch.

The other part of ponds are abundant and other species of fish, in particular predators. Such ponds or rivers with an average depth of about 4 meters and the water is saturated with oxygen. Here carp are secondary and capricious character. But finding the place of his dwelling and the Parking area, you can catch a big fish choosing the right kind of bait.

The best place for fishing is an overgrown pond with a muddy bottom. Large specimens prefer deep space with cool water, and catching it better with the bottom snap-in called “killer carp”. 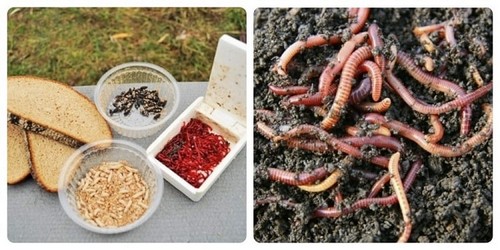 On the float rod bait used by various animal and vegetable origin. Bait animal type: red worms, bloodworms ordinary, Nightcrawlers. The worm used everywhere, small maggots and bloodworms are often pushed where other fish are not. This is explained by the constant obsluzivaniem the hook a trifle. When hunting big carp are well manifested with a variety of sandwiches: maggot with worms, pieces of Nightcrawlers with a worm and so on. Fish of small size may not have such a big fraction.

Among the vegetable baits in the first place is the dough made from different types of cereals. This can be done: wheat, peas, corn, flour, semolina and peas. The dough of peas with semolina in the people is called mandula and perfectly manifests itself when fishing any peaceful fish. There are many recipes for the dough with the addition of various flavorings, both artificial and natural (cinnamon, honey, garlic, anise, vanilla). Here, every fisherman can turn on your imagination and your newfound culinary skills.

One of the leaders, as we have said, is mandula and boiled (or steamed in a thermos) pearl barley. It is used not only as bait but also as bait, mixing or ready mix purchased (e.g., universal) or as a separate feed. After you have steamed or boiled barley should give her time to cool down, then add bread breadcrumbs.

Crackers play an important role: take away excess moisture and create a slow sinking particles during casting, thus attracting the attention of fish. After each casting rods throw a small ball of barley breadcrumbs in the point of fishing. One of the favorite delicacies of carp are pasta. Cook the pasta stars (they are small) and mix with the breadcrumbs.

Most often, the bait is bought in the store because of the reluctance to Tinker with a homemade mix that nothing. All the used cereals are much cheaper, take a little time when cooking and have a great impact on the bite. Also, you have the opportunity to cook from the same grains weight baits with different flavors and odors without taking up a lot of time.

For successful catching prikarmlivat place, preferably, do this a couple of days before fishing, but if the opportunity to come in advance, then feeding on the spot. Methods will depend on finding in the places of fishing of other fish, especially the little things. If carp view prevails, then we can safely use a small dusty fractions of food. Fit and purchase ready feeding of the mixture, creating a dusty cloud when released into the water, attracting the attention of fish.

When the addition of live carp and other species (including fines), feed homemade mixes from grains of barley, corn, peas, barley. In this case, avoid creating dust clouds in the water, so as not to accumulate at the point of gear change. Balloons with bait should be done every year, which they broke only at the moment as they reach the bottom. If the detail still to come, it see for hook lure size more, whatever small things she could not swallow.

The arrival of small fish is not always bad: the flocks of the little things well attract larger aquatic inhabitants, since fish is, in essence, is curious.

Equipment with a float rod and tips for beginners

Most commonly used centrifugal or Bolognese rod. The quill catch up to 20 meters, allowing you to feel the tackle, and see all the float time cutting fish. This method is familiar to many: the scaffold is fit to the end of the Blanca, the coil in the snap-in does not apply.

Now you can additionally set the shock leader, which absorbs sudden jerks big fish and protects sensitive gear from gap. Length of the working part of the line should equal the length of the rod. This method is mainly used for fishing on the boat, but not prohibited to fish from the shore.

Bologna rod equipped with a reel that allows long casts, and use a more subtle and delicate line. Method is suitable for all lakes, rivers and reservoirs, but is more often used in clean areas where there is little vegetation in the form of water lilies or algae, where there is no need rather get the fish to shore, she wouldn’t have wrapped the fishing line around the plants.

How to rig a float or create sensitive tackle

One of the main components is the correct ogruzka float. The weight of the sinker should be enough to protruded from the water only antenna. It is painted in bright colors for visibility, can also be coated with fluorescent paint for fishing at night or dark time of the day. Many modern floats manufacturer specifies some figures: the weight of the float and the weight of his shipping, which is very convenient. 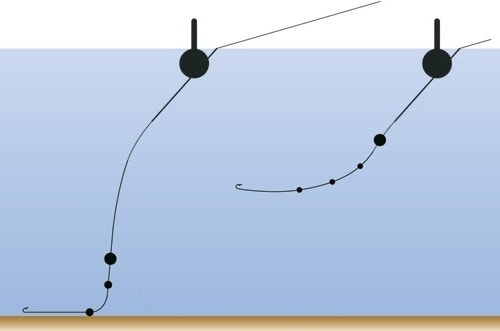 As is increasingly the fashion consists of adjustable weight model, where removing or adding the load changes the final weight. This eliminates the need to carry additional weight.It is important to use not one large cargo and to replace it with a 3-4 weight is smaller.

Above the hook, the first, hung with small and light weight, called shepherd boy. During the bite, the fish doesn’t notice the resistance and weight that takes the bait more confidently, which significantly increases the number of completed sweeps. Hung next 2-3 load heavier.

Fishing with a float rod is an interesting and entertaining process. When the antenna of the float, after a long wait, plunges abruptly into the water, leans or rests on a surface of any one fisherman will not remain indifferent. And no other modern tackle will not bring as much pleasure from fishing.