Catching roach on the float rod begins immediately after spawning, and ends with spawning in the summer (to be precise, in June). As we all know, after spawning the fish begins to come to żory. Here Rudd is no exception, and that after the spawning period includes the peak activity of the fish.

Do not forget that Rudd starts to spawn from mid spring. And such a long spawning period greatly affects the bite. And it can lasts much longer, not once during the summer fishing I used to catch the Rudd caviar even at the end of June. But closer to the middle of summer it all ends.

Very often, the Rudd can be found at depths of 1.5 meters with a high abundance of aquatic vegetation or reeds. Such places the fish fell in love with not just the first cause can serve as a great refuge from the predator, and the second is the abundance of fodder. Despite all the talk and fables about Rudd, she is not averse to eat aquatic vegetation and green algae. 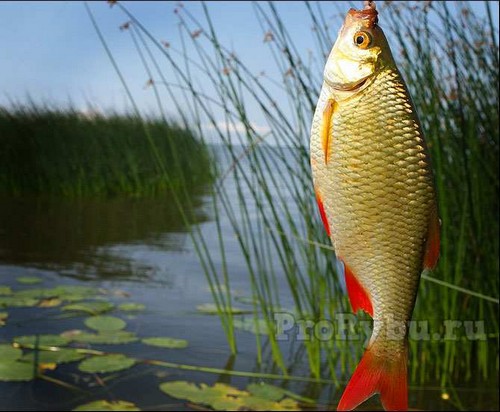 Often catching roach on the float rod occurs in the middle layer of water, but especially hot days, she, like most of the fish rises closer to the surface. If you carefully get close to the pond, we can see flocks of fish searching for food on the water surface. They just “iron” the surface of the pond and in the fall of insect in there, immediately move to attack.

But as soon as the fish will notice the person, the pack suddenly disappear from view, it is a signal of danger and fish hiding in the reeds or aquatic vegetation. Such places are best suited for fishing. A couple of the fish you just caught. And as soon as the bite will disappear, it is necessary to change the place of fishing or just to throw the bait.

The most important thing is setting the correct float fishing rod. You should get the effect of a slowly sinking bait. To achieve this effect it is necessary to raise the sinker to the bobber and your bait will slowly pass through the water column. As experience shows, this technique of fishing brings in the most fish.