Bream is an enviable trophy for the angler-winter road. However, to catch bream in the period of ice formation is hard enough, especially on the river. If in confined waters when searching ledovyh places often focus on areas where water is more saturated with oxygen (where the fish feels better and more active), in fast flowing rivers such as Ugra, Oka, Terez, don and some other level of oxygen in the water continues to remain quite high throughout the winter. The bream fishing in winter, over complex for beginners. Understand what tackle to use, where to fish and what to offer winter bream. 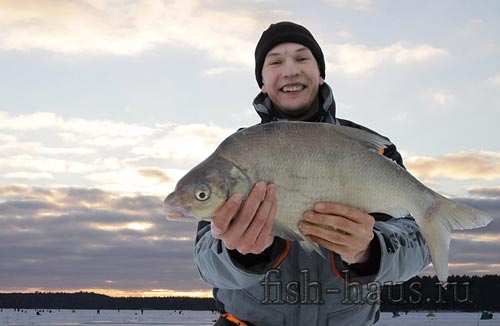 Winter fishing for bream on the course

Bream, which in the winter always kept in great depth in fast flowing rivers is constantly moving. But Lesova flock may remain at a particular vending station as long as the scanty food supply.

What is bream in the winter

Bream in winter eats mainly food of animal origin – it is high in calories, and a small quantity makes up for the cost of energy that the fish consumes in the harsh winter conditions. In medium and large rivers are often the main food of bream is the Zebra mussel. Plantations of this fine mollusc in rivers can be found in the most unexpected places.

In addition, winter bream often searching for food on the rocky bottom areas. Dying or weakened mollusks, crustaceans, bloodworms and other larvae are being demolished over and get stuck between the stones with minor silt sediments, where the bream often finds food, picking his head to the ground.

Where to catch bream in the winter

On an unfamiliar river in front of the angler in the first place the question arises where to find the bream. In the winter the fish often chooses areas where tyhovoddya ringleader is bordered by the fast water. The bream will stay where he is more comfortable in the silence, and, as we have said, to look for food on the ground or will have to wait for when the fast current will carry him food. Typically, these places are not far from the great depths, the pits, where bream slides, when there are unfavorable weather conditions. 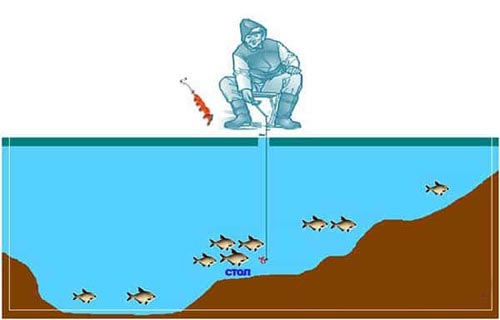 During his activity a school of bream, leaving the pits, maybe to look for food, moving along the edge of the river channel, particularly at bends, where it also lingers demolished over food. Sometimes this edge is located directly under the steep banks near quiet stretches below rapids. Often, especially in the thaw, ledovye flocks come into quiet water of the deep bays, and also appear on seamounts near Svalov channel.

Considerable attention should be paid to impact streams, where often both in winter and in summer keeps every fish, including bream. Because such places under the ice it is difficult to determine, they should take note of summer. When everything is covered with snow, the angler relies on a secluded bushes or trees, unusual topography of the shore, etc.

Winter bream prefers certain routes, which is popularly known as losowymi trails. To find a trail is a big success. Sometimes it is useful to “spy” places of bream fish from the local fishermen.

Where to find bream in winter on the river

Bream love to stay near Svalov channel or walk along the slopes of the pits on which to settle colonies of the Zebra mussel. At the bottom, near the bottom of the slope, can accumulate organic and other food, tasty for bream. The nature of the bottom in such places allows you to divide it into sections according to certain depths. Often the bottom there is a few ledges with a certain depth values, for example: the upper ledge – 4 m, average – 5.5 m and the bottom is 7 m.

Bream chooses the level at which he feels more comfortable in a particular weather. So, with the atmospheric pressure decrease bream goes to the greatest depths, with increases, on the contrary, can rise into the middle layer of water that is located on the middle or upper back.

Especially effective for catching bream are areas where channel and movie drop offs coexist with stony underwater ridges. Such places Lesova flock does not leave even when a colony of Zebra mussel significantly eaten away. With the onset of favorable weather conditions, the bream out of the pit, starting to search for feed on the ridges, and always find something good.

Tackle for bream in winter on the course

Rod and nod for bream in winter

For fishing on the course you can use different versions of Ugolnikov and different equip them. Some anglers prefer to catch on the “filly” with a float snap-in, other – on fishing rod equipped with a reel and a nod. However, it is possible to do the opposite – to equip the “filly” with a nod and reel spinning elements with a float rod. That will be near the bottom, a jig or a lead with a hook, also a matter of taste. We prefer to use a sinker end and standing over him at 5-10 cm long (20 to 50 cm) leash with one or two hooks. If you are using our jig, it is only small, which are placed one behind the other on a leash with an interval of 5-7 see 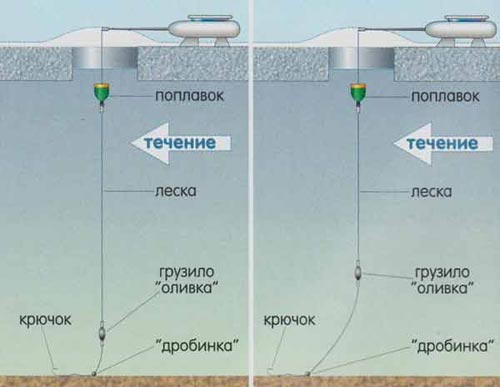 As alerter bite good nod, made of clock spring. The sensitivity of such a nod, depending on the strength of the flow is easily adjusted its length, while a strong flow capacity of a conventional float may not be enough, and it will go under the ice. If parts of the snap-nod – carrying end sleeves or ring – frosted over in the cold, they should pre-RUB with wax.

To connect the main fishing line and leash, it is desirable to use the clasp and the swivel. Not be amiss to set the swivel and connecting to a sinker whose weight may fluctuate in the range of 10-50 g.

The diameter of the fishing line for bream on the course

Bream when the fish are actively resisting, so the main line is taken in diameter 0,16-0,18 mm. of Course, it needs to be very good quality. The leash is placed with a diameter of 0.11 to 0.13 mm. Tackle from the fishing line of a smaller diameter, subjected to additional exposure to currents may tear. Hooks is better to take small: with a normal fore-end and straight bend No. 15-18 – for bloodworms and No. 12-15 with a long fore-end for the worm. 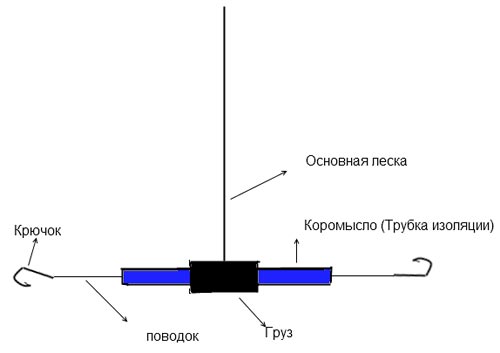 You can also use snap-on the basis of sinkers, made in the form of olives. In this case, one leash is for olive and the other in front of her. The use of different nozzles, such as the worm and the moth, to determine which one is more efficient. It should be said that the long leashes are good only in the case when fishing is conducted in a strong current with a fixed on the end of the fishing line sinker; then the leash goes widely from side to side, attracting fish.

To catch bream in the winter for

Winter tip for catching bream is usually a tassel from a large bloodworm. Each larva ought to stick under the second joint, trying to keep the fluid from it leaking. Is also very attractive for bream, especially during periods of thaw can be a bunch of small worms, dung or podlistnikov, which are harvested in the fall and stored in a wooden box with the ground at zero temperature. In some cases, bream are caught on small maggots, with a hook baited with 3-5 larvae.

Bait for bream in winter on the course

In winter bream fishing bait plays a significant role. For delivery to the bottom use conventional cone feeders of different sizes. Feeder okrujayut additionally, if the current is too strong to not bore. This can be attached to the lid of the feeder with the copper wire lead plate, pre-drilled corresponding holes. Often anglers use a ready-made herbal mixture intended for winter fishing bream, which are sold in fishing stores.

Before in the normal cone feeder to load the bait, it is necessary to moisten with water taken from the wells. If you prepare the bait at home, soaking it with tap water, it can have odors to which bream is very sensitive.

To plant the bait wasn’t down over, it is mixed with sand or gravel taken from the shore outcrops. Add the bait mixture of bloodworm or maggots significantly increases its attractiveness to fish. Very often bream feed at all only small bloodworms, which, however, also be weighted with soil. 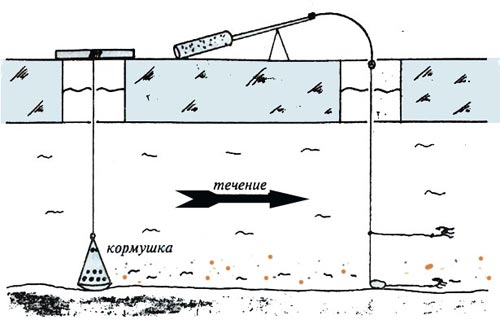 When fishing for bream on the course it is important to create a feed track, which from a distance will suit bream. The nozzle should be at the beginning of the feed track, so the hole to drill trough about three feet above the hole, which delivered the tackle.

When fishing at depths greater than 6 meters with a strong stream distance between the aft and the working hole can be increased to two meters, below the trough is not too demolished to the place of fishing. Sometimes, if you feed one bloodworm, feeding near the bottom is not open, and leave at the bottom in the process of catching closed. In this case, the holes in the feeder should be sufficiently large that larvae are well washed.

Bait for bream in the winter with your hands

In the manufacture of bait vegetable mixture independently is important to consider to contain light particles (breadcrumbs), which will be demolished downstream to attract fish to the fishing spot, and heavier particles, which form the feed track. Keep in mind also that the living components (maggot, worm) will create in the water attractive fluctuations, and their smell will quickly attract fish to the fishing spot.

In winter, you should not get involved with large plant particles of a type of steamed millet. It happens that the bream out from the place, because the bait used was poorly cooked and beginning to rot at the bottom, scaring the fish away an unpleasant odor.

Tactics bait bream on the course

Usually on the river angler sakarlal few places that he considers promising to release the bream. It is best to use two or three pairs of rods. Having studied the reservoir in the summer and knowing the place of calm flow, where may confer natural feed drill with this hole. And choose a territory to promising areas were not very far from each other, no more than 50 m. Drilling paired wells, mark them with red flags. To each well is lowered by a tackle, but so that the nozzle is above the bed about two meters away – then it will not bleed the thing. Catch are first on any one pair of holes, and if for twenty minutes followed by a bite, change the place of fishing. For this advance have to prepare their gear.

To the choice of each space should be approached carefully. Enough looking in the neighborhood of fishing and knowing the force of the current, the direction of the cutting jets, and the bottom relief, choose such place where it can stay on ground the obstacles washed out of the trough of food, especially bloodworm, maggots or chopped worm.