Perch fishing on the edible gum 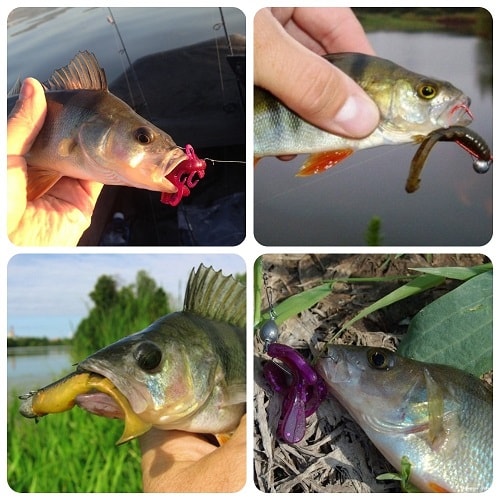 First understand, what is the best time to catch perch this method, but with the caveat that this does not mean the absence of fish during other periods. Very often they are used in winter and autumn. In the winter, because the choice of baits in General is limited and somewhat sparse. In the autumn attractive his game, as well as in the spring, during Jora.

In the summer it is also actively used, especially in moments backlava, when the turntable or spinner “silent”. When selecting a particular rubber for the perch in the first place should pay attention to 2 components: the size and color. Weight in this case does not play a decisive role, because for the most part use sinkers Cheburashka, bullets and other, giving the bulk. Mass of the load is selected depending on the test spinning.

Targeted hunting of striped choose bait size smaller than on a pike, that is 10 cm are rarely used. They of course will work, because this fish is very greedy and often tries to eat the prey, but the right to take bait to 65 mm, is a fine balance between cost, size and versatility. 65 mm bite not only our captain, but also pike-perch, pike and other predators.

One of the best colors that work in almost any environment is considered the color of Cola, carrot, color of engine oil and others. Also, they are attractive not only for its coloring and game and and smell. Most often it is the smell of “shrimp”, which handles most lures all manufacturers. In the following article we wrote a guide how to upgrade the smell of rubber, to improve the effect. 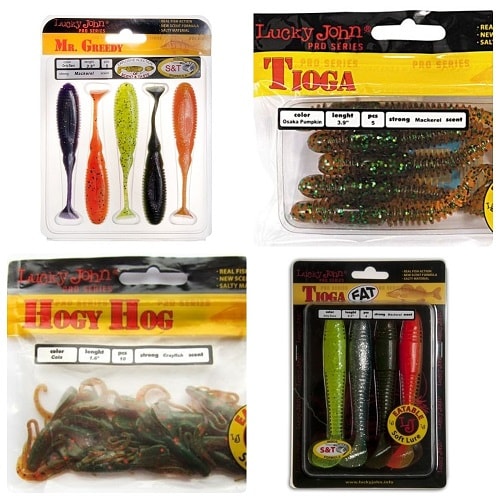 Brand: Lucky John has been in the market for a very long time. In 1988, champion of Latvia, founded a small company that has won the world market and recognition, becoming one of the leaders in the production of different baits: rubber, wobblers, spinners.

No wonder today this brand is very popular among fishermen of all countries: low cost and availability with excellent rates in ulovistost and bites. And really, if you look at the lineup of lucky John, it becomes clear that they have all, with a price for every budget.

Keep in reserve at least a few color colors: for fishing in Sunny and cloudy days. The rule says that dark colors are used in the daytime in Sunny weather. If the weather is cloudy or the sky there are clouds, then try lighter tires. In any case, try different colors and montages, with the main ones you’ll find below.

Fishing fanatic — the larva of a storm perch 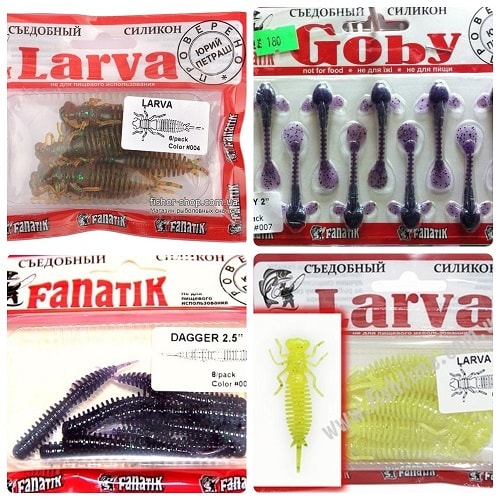 The notion of edible rubber came to us from far Japan. Of course, this is not due to the fact that it could have, or if it enters the human body it did not bring harm. This property was “grafted” to care for the trout, which are fished in certain parts of Japan. The fact is that if the trout will bite off part of the rubber and swallows it, the stomach will not handle it and the fish will die. That is why they began to use special additives.

But it has played a crucial role for the conquest of the Russian market. During the attack the predator, driven by natural instincts, trying to swallow the prey, or at least not to let her out to graze. If at the moment of capture he will feel the catch, it will immediately try to get rid of this, which is what happens with rubber, which is not edible additives.

Otherwise, receptors any predator, realizing that in his mouth it was the prey, and not something else, give the command not to let food from the mouth. Get a great effect when caught perch will continue eating, increasing the chances of his capture.

The bypass leash. Has a number of advantages, and here are some of them. Simple in execution, does not require special skills and knowledge, is universal. Can be used on the course and in stagnant water. It is easy to produce the casting at long range, especially important for wide rivers or lakes. Just because your device is a long time in the area of the attack of a predator, which positively affects the number of attacks, and implemented the sweeps.

Perfectly provokes sluggish and inactive fish into biting. Highlight a few features that are worth considering for beginners. The length of the leash must be at least 1 meter, it will provide a good game and activity. During the wind to make casting with caution, as gear can easily get lost and if you do not notice, it will be an empty harness. Don’t forget that it is not necessary to overload the spinning sinker more than his test (specified on the form).

If you use a very light silicone bait, without weighting offset of the hook this will lead to a tightening in the transaction. The problem does not concern vibrohvosta for 65 mm face this often when fly fishing small twisters. To weight add lead pellet.

The drop shot.A great choice for spot oblaivanie small open areas of water. It can be the window in the grass, Lily pads, driftwood and so on. Advantage — the accuracy of the cast. If you know what you will catch on depth and to not do long shots, a good solution may be to drop shot. 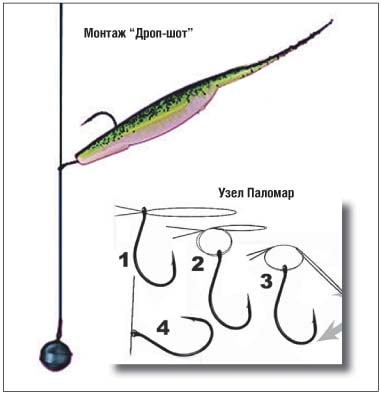 Mounted simply. Unlike most other snap-ins is that the bait is not in the same plane with the main line. At the end of the cord tie the load, then stepping back 30-60 cm knit the knot with a hook as in the photo, it is important that opsitnik was located up a sting. It remains to equip it with the desired vibrohvosta or Twister.

Nagruzhena rubber. Newcomers have a lot of questions, for mounting by this method. From the name it is clear that the weights in this snap-in is not used, use only the weight of the silicone with a hook. Ideal for places with thickets of grass or snags. As you know, is the favorite habitat of perch and pike, but apply standard methods of shipping dangerous because of frequent breaks and hooks.

To offset hook tied to mono or braid, then the usual way is placed a bait in appearance nezatseplyayki. Sting hidden in the body and directed towards the head. Thus to cling simply nothing, because of the lack of weight it is not immersed in water. If this is the method you purposefully catch the pike, don’t forget to use tungsten or a metal leash. Therefore, the mounting of the gear to be produced to him.

When float fishing in the Lily pads professionals often use this technique. Fill up pogruzhennogo tackle directly into a sheet of water lilies (they are quite large in the summer) and slowly pulls her into the water. Bass often is in such places, numerous flocks, and instinct gives him the signal to attack a target that had fallen into the water. The fact that beetles, dragonflies and other insects often fall from the branches of trees along the shores, in the water, this includes water lilies. Knowing this, the fish is on duty in such promising areas.

How to strengthen the smell of silicone baits

Over time, the silicone losing its distinct smell. This is especially true when, after unpacking from blister tires on it mounted opsitnik, and ready for fishing tackle goes into a box, where is years. To refresh the smell, you can go in several ways. The first of these is to send all weathered bait in a pack with the new silicone to hold them there as long as possible (most importantly, that the package is securely and tightly closed).

The second option is to buy the attractant and put it on the bait. One of the most famous manufacturers of such chemicals are Mega Strike, no less famous Rapala Gary Yamamoto. The label States the steps look something like this: everything that needs to be impregnated is placed in a sturdy package with no holes. It is added attractant (approximately 0.3 ml per 10 silicone). Further, the package securely closes and all the content is thoroughly mixed. Ready, in this form, they must hold for 3 days. If the season has already ended, you can move soaked the rubber in blister packs, tightly closed. Thus the scent will not evaporate, and the next season you’re ready to go fishing.

One Comment on “Perch fishing on the rubber: catch secured”