Fishing for roach in July and August, more productive and interesting. But, despite the higher activity of roach than in June, to be with the catch in the summer period it is necessary to choose the right time , place and tackle for fishing, buy or make your own bait mixture, to produce timely and measured the grazing of a particular area. 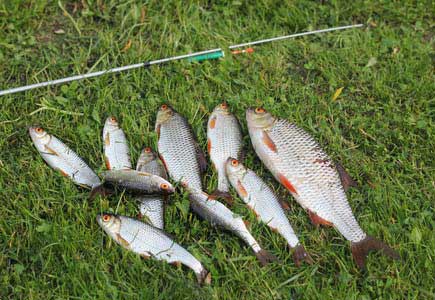 Fishing for roach in July on a float

In the July heat, the roach is still quite passive, feed is only active for a short period of time. In the day-time heat is in the deep holes, under steep banks, Lily pads, submerged roots and snags. Small species are located in the upper and middle horizons of the water, large and medium feed at the surface only at the morning and evening dawn. All the rest of the large specimens weighing are kept in small flocks or singly near the bottom.

Where to catch roach in July

On rivers of various sizes in July roach caught in such places as:

In still water the fish is kept coastal thickets of water vegetation, flow between the lakes, places with underwater plants and solid, pokryt a small layer of silt, sandy bottom.

When biting roach in July

The most active biting medium, and large roach in July at the following times:

While early morning and evening to catch a roach in the surface,subsurface layer. During the day, a big roach catch middle or bottom layers. 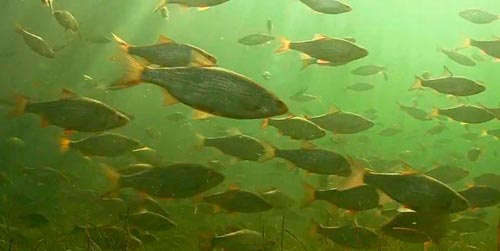 Fishing for roach in August on a float

In August, the weaker the heat of the roach starts to more actively feed in preparation for the upcoming winter. At this time, the catching roach is better than June or July — the fish are biting not only in the evening and in the morning, but in the light throughout the day. At the same time in surface and subsurface horizons along with the small instances begin to feed and larger. Towards the end of the month, the roach starts to more actively peck at the nozzle of animal origin.

Where to catch roach in August

For catching roach in August suitable for such places as:

When catching roach in August

As in July a more active biting roach in the early morning and late evening. During the day the fish are fed with warm, cloudy weather with rains passing quickly.

Upon the occurrence of a protracted rainy days with a cold North wind biting stops and resumes only when a steady warming.

As in July in the previous month in August, active biting roach and at night when fishing on the bottom gear of bream.

Float rod is the most simple and available to every angler tackle for catching roach. Catch her this fish, as in the current, and in stagnant water, which imposes its own requirements to the configuration and characteristics of equipment used in certain conditions.

On the flow behind a roach

When fishing on the course apply the Bologna 5-7 foot rod with small spinning reels on which is wound tooling, consisting of:

For catching in stagnant water applied centrifugal and Bolognese rod length of 5-6 meters with a snap, consisting of:

In addition, when fishing in water bodies without current passes for a distance of over 20-30 meters used match fishing tackle. It consists of:

What bite roach in June, August

Bite roach in July and August, both on the plant tips and bait. Among vegetable nozzles roach prefers such as:

The main bait for catching roach in July and August are:

Bait for roach in July and August

The independently manufactured for catching roach at this time the bait add components such as:

Ballast (weighting) – red clay or of sand in the soil. 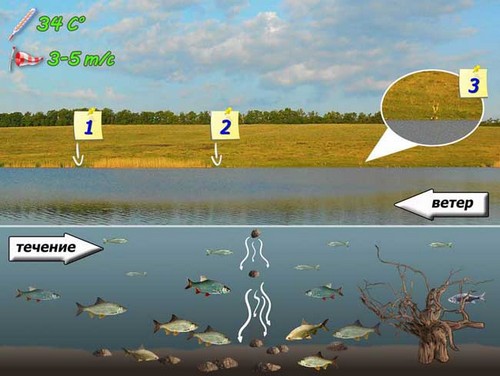