Most people is not enough in winter — summer, autumn — spring. And fishermen are no exception. From the middle of the summer season begin to emerge in the memory of the scenes of the winter fishing, the fall of the symptoms worsen, and as soon as the first frost, the desire to be the first ice becomes simply unbearable.

One could, of course, and this output is still to catch in open water, but the possibility, albeit very slim, to walk on thin ice, cut through the first hole outweighed all reasonable arguments. That opened Rotana winter fishing on the first ice on the already frozen ponds and reservoirs. 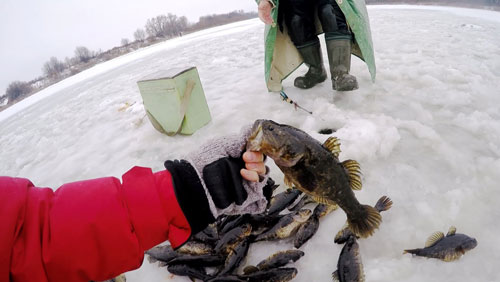 In fact, solid ice to wait more than had three days the night temperature was about — 4, the minimum fell to — 8, but I know some anomalous ponds, which is enough durable crust of ice rises contrary to any logic and weather. Of course, this small modemsite where dominated by rotan, which my friend fishing contemptuously refers to a cross between a perch and a frog.

I recently to pay respect to this fish, delight your gambling cool on the first ice in such places where any other fish simply will not survive. In short, I said your favorite ice pick, threw a backpack a couple of rods and went in search of frozen water.

Driving along the reservoir dam, sympathized with the four characters, whose boats were rocking on the cool waves, even if at the moment they are catching walleye like they had to envy. The first pond, almost immediately after the police post located away from the dam, disappointed. Ice it was, but it is not something that is to come — even watching was scary. Went on.

Next pond appeared from behind the turn after 5-7 minutes. Wow, we’re not the first! On the shore is already about five cars, and on ice there are the most impatient and risky.

First, uncover ice pick — without this tool on thin ice can not come out. Tapping it in front of him. The ice is clearly uneven thickness in some places penetrated with a single blow. sometimes crackles when walking. But if you move gently, sliding step, constantly checking ice thickness, it is possible to choose safe areas for fishing.

Start to cut holes from the steep river Bank, lower the ice pick to the bottom — a depth of about a meter. Make a few holes along the shore, then a few more— in the direction protruding from the ice tires. Knowing the preferences of large Rotana, I hope it next to the tire to flush out the fat. Go back to the first hole, get a fishing rod with the “devil”. With a sense of pioneer lowered the bait into the water, feel the bottom start to play the bait.

Bait for fishing in the winter Rotana

On the first transaction transmitted from the greedy grip of the hand on the ice is the first season of rotan. I catch a few fish with a length of 8-12 cm, the bite ends happily. 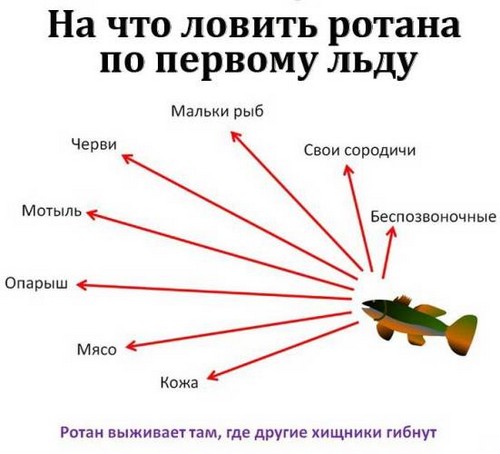 Its not very long rich experience rotary fishing I know that “the devil” without a nozzle strikes sometimes more, and will be able to realize almost everything, but fish will be smaller than when fishing with a nozzle. In addition, the “devil” — the bait is small, and if do not immediately fall under the nose Rotana, the fish coming to the hole for a long time.

If you catch a minnow impaled with a piece of meat the same Rotana, you can expect to catch larger fish, and it will come faster for some reason, like the head is voluminous and serious bait.

Therefore, pre-stunned, the little fish cut into pieces — it’s a nozzle. Cut a piece of approximately 5 x 10 mm, with the skin. His skewer, piercing the skin with a hook bleszinki, and bring the hook out. Check a few holes in a row, playing bait. Play a lure when fishing Rotana as the jig, changing the frequency and amplitude, check the entire water column from the bottom to the edge of the hole.

Rotan often accompanies the bait from the bottom and followed the wiggling piece of meat his little “pig’s eyes, and only under the hole decided to grab her.

But nothing doesn’t happen. Even at the point most likely to bite — tires— firebrand takes. Apparently, today she is not looking for the bait, and the bite can be solved only when the nozzle is under the nose, so you have to switch to the active search.

Looking for Rotana as well as perch. Holes are cut or differences of the depths, or near grass, bushes, rocks, that is where the hunter can hide in waiting for prey.

Many noble “RotaMatic” use the bait — ground meat, bones with some meat or finely chopped Rotanov, and sometimes the catches are very impressive and the number and size of individual instances.

But I don’t tend to catch as many of Rotana, I just want to go fishing, to find the most attractive sites for fish to lure the sullen embers of their hideouts. Therefore, the bait I don’t use.

Where to catch Rotana on the first ice 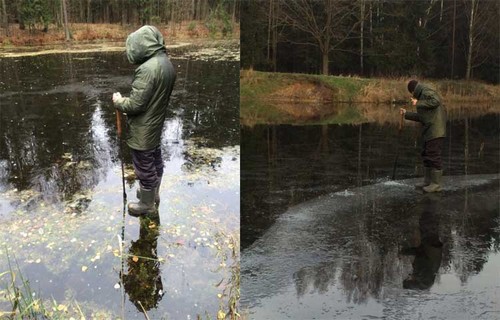 Moving across the pond, I notice that today in the deep places of bites less, and the bulk of the fish holds where the water layer under the ice about half a meter, in the grass. Therefore, further search of the spend in areas such depths. Takes today, not immediately, but after five minutes after the hole is cut, apparently due to the small depth. But then come several Ratnikov is clearly visible in muddy water and attack at a time spoon until there are one or two the most careful and more than once nikolovska on the hook.

On one of the holes of the spinner falls near the stone, which shows a gloomy appearance light yellow romanise the size with the boot (though the children’s size). In fact rotan chasing bait on top looks grim and focused, apparently because of his close-set little eyes on a broad head.

Trying not to startle the beast, gently stir and spoon little by little raise the lure higher and higher. Clearly interested, rotan at the same pace, almost motionless, POPs up with the spoon under the hole lazily opens its mouth and sucks up the bait and throws to the side. Blow, and the spoon flies out to graze directly on the ice. It’s a shame, rotan is clearly captured. All further attempts to seduce him to anything PE led. What to do, apparently, because he’s grown to such a size that the careful choice of food.

Now to catch pennies for some reason do not want, the first desire shot down, the excitement has passed, suddenly frozen feet, not yet dressed for the winter season, the wind became colder — anyway, time to go home.

Three hours of active fishing caught a couple of kilograms of green, yellow, black, swamp spots, brown speckled fish, which does not want to be called “a cross between a ruff a frog.”

After a successful fishing trip on Saturday 19.12 has taken a definite decision to go on the next day there, to catch giant, which is 2 times pecked Valera. Valera did not go with us, so took it to the hole, hoping for a strike.

The morning bite was great. The hole is not frozen over night and almost each brought 1-2 Rotana.
In the morning messed up the time of departure and set the alarm clock with the expectation of an hour later. Because of this waltz had to gather after Orinoko call and escape to the rendezvous, where I waited. Did not have time to brush my teeth, eat, and pack a meal.

But it all paid off great fishing. Large rotan pleased by their sharp bites, well saccules and before dinner pecked continuously.

Caught in a frenzy, hoping to take the monster. But he never took the bait. The catch pulled 10960 g in 72 pieces. Today is my best fishing on Rotana with ice!

The largest of our company today fell Valera. 450 g! Fishing was great, though at first I could not find the way to the Rotana. But after lunch, rehabilitated, apparently, showed by his example the Rotana as it should have. I have today was not particularly large, though I really wanted.. Maybe next time? Our catch: I have 4, Yura and Sergei — 6, Valera — 9 kg.