With the advent of the summer months aktiviziruyutsya the spinning. Spawning ban comes to an end, and you can uncover tackle. The pike fishing on spinning in June — a fascinating and profitable fishing. It is possible from the shore and from the boat.

Where to catch pike in June 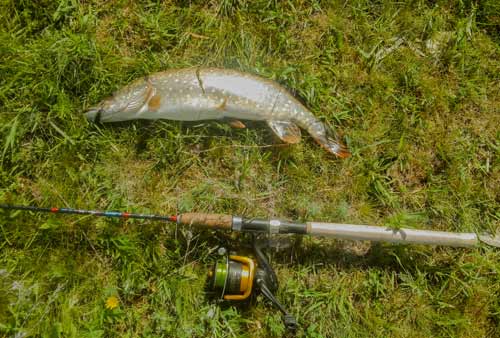 The choice of location for fishing plays the key role, especially when fishing for predators. Pike — ambush hunter. It waits for its prey near grass, shrubs bushes, in the reeds at the bottom of the border of the thermocline, above which is inhabited by small fish.

The main criteria when choosing a place for catching pike June two: the presence of fish that could potentially become the prey, and an excellent place for an ambush. The presence of small fish is easy to check visually, with sonar or just throwing it in a most pleasurable place zhivtsovy a small fishing rod with a float. If there is a strike roach, bleak, Rudd, crucians — so this place could potentially attract a predator.

In an ambush, there may be grass, snags, shrubs, shaded areas over the water. With the formation of the thermocline in the summer months the pike preys on the entire area of the pond, waiting for prey below. This is particularly evident in lakes and ponds, where the thermocline formed early and no current. Large specimens prefer to stay closer to the bottom, but in summer months they are not very active, and catching them is more random. Catching them should be on the drop offs in depth, as well as in the pits. 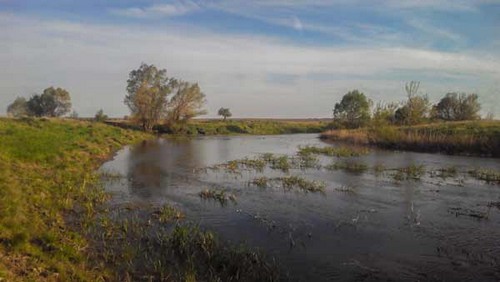 On the course you should look for pike where it does not need to spend large forces to stay in place, waiting for prey. Usually it’s all kinds of tap wrenches, bumpers, seat with back or no. In the rivers quite poorly formed and held the thermocline due to the fact that the water is mixed. So here is the place for pike should be sought close to the shelters and habitats of small fish.

When fishing for pike in June from the boat, the angler is available in more areas. There is a sense to put the boat to throw the bait close to the border of aquatic vegetation, or use nezatseplyayki and doing posting in the middle of the grass. The bottom jig in the summer is not very efficient. On the river convenient to have two spinning — with one catch in the cast, rafting along the border of the shore and throwing into the deep, and the other is used when returning as a track. After a few such runs and left without a bite, you should change the area of fishing — it is likely that the fish here just yet.

When caught pike in June

Pike — day predator, seeking prey with his eyes and sensing the vibrations of the lateral line. The most effective time for fishing — from twilight to sunrise, and then to ten hours. The second biting — in the evening, at sunset and before twilight. The largest specimens prefer to bite in the dusk, and small pencils caught all day. When fishing it is very important to determine when the pike goes hunting. Active nibble it lasts no more than half an hour in a certain place, and then it goes to the shelter. Usually this is due to the behavior of flocks of small fish, which to a certain place suitable for ambush, pike, and she begins to hunt.

In Sunny weather it is easy to find food as the food goes over the entire area of the reservoir. In cloudy weather, little rain little thing moves closer to the shelters, to hunt for her becomes more difficult, and pike gets hungry. At this time, catching her most effective — the most active bite occurs during light rains and immediately after rain, during periods of short-term cold spells. In heavy rain the fish makes no sense, especially in shallow water. She is looking for prey largely with the help of the sideline, and the rain will interfere, plopping on the water. At this time it makes sense to try to fish at depth.

How to choose a spinning rod for pike

The unequivocal advice given here is impossible, as each angler has their own preferences. Very much the choice of gear depends on fishing bait. Build the rod you can choose any, but for accurate casts easier to use rapid spinners. Pike are often caught in the Windows of vegetation on surface lures and nezatseplyayki, there must be sufficiently accurate throw. The rod length is 2.2-2.4 when fishing from boats and normal conditions from the shore. When fishing among bushes and other awkward places, and to particular methods of fishing, you can use a shorter spinning.

The coil needs a good lay line, it is a universal requirement for any coils that gives the angler the opportunity to catch with comfort. Size of the spool take from 1500 and above. Take ultralajtovogo reels and spinning rods for pike is not always possible, because the pike fishing on spinning in June often is in the grass, and the ultralight is ill-suited for pulling out hooks. If you catch twitching, jerking the rod, the reel requirements will be higher. 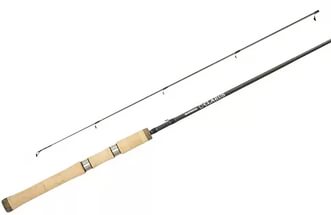 Fishing line or cord? Overseas fishing line is more popular due to the ease of use. We have more than caught on the cord. For spinning is to choose a good cord that has a coating. It would be better to behave with the lure will last a long time. However, when fishing on cranky the cord is too “hammer” in hand, especially with big baits, and that is why many are beginning to move on the line. It is desirable to use a medium hardness, fluorescent color, so it was good to see and was easy to untangle. The thickness is usually taken not less than 0.2.

A mandatory component of the snap — leash. Pike has sharp teeth when playing it twirls open mouth, clinging to the fishing line or cord. It runs right in the teeth and can easily pererytitsa. The length of the leash is taken from 10 to 30 cm can be used as steel leashes, and tungsten and titanium, and special pedestrian materials. Leashes can be made independently. After fishing a tight leash, it is desirable to replace a new one, because usually they wear out from bending and can break at the most inopportune moment.

What caught pike in June

Two traditional and most popular bait — and crank kolebalki. Kredkami good to fish from under the thermocline, kolebalki — near the grass. Among kolebalki often used nezatseplyayki that allow you to catch the most “magic” places near grass and driftwood. Color of lure can be important in certain conditions, but when the fish are active and hungry in cloudy weather, it is of less importance.

Turntables rarely, but still sometimes used for catching this fish. Usually put a fairly large petals of the “LON” and all kinds of Chinese turntables with holes, bashmetov and other. The color of the lure here can be relevant depends on the location. Turntables are good that discourage petal grass and give less of hooks in shallow aquatic vegetation than conventional spoons. When fishing for them you should use the shifting of the rod from left to right to change direction of the fan. It’s good to provoke the fish to attack. Turntables can be directly to sh in most waters and on the course and in stagnant water.

Pike takes well to all sorts of spinnerbait and buzzbait. They are good because they give little hooks, they can catch, and bottom, and as a surface lure. This versatile bait can be used in the study of unknown water reservoir to determine the habitat of the predator, using a universal test medium spinning rod with a good reel. Here it is desirable to put the cartoon, because the load at the wiring to the coil from pike spinnerbait can be a great and bezynertsionnoj will strongly wear out.

Jig — a popular method of fishing. For pike use twisters and vibrohvost large size. The worms are caught rarely. Pike takes basically on a uniform wiring in the floor of the water, at least — on the drawing on the bottom. You can use the snap-in type outlet leash, and the driftwood caught on the Karolinska snap-in. When fishing from under the thermocline is important to find the weight of the load to the speed of posting, so pike could easily aim and throw at a slowly moving lure, and that it took place around the border of warm and cold water.

Surface lures allow you to watch live all the biting fish. Use poppers, walkers, all kinds of frogs and eggs. For fishing they need a lightweight and tough enough spinning type wand that allows you to prodelyvat the bait and keep it short ryokami and a good coil, winding smoothly even under variable tension on the fishing line. Catch more comfortable with boats than from the shore.