Som is widely distributed in Ukraine. It is mainly concentrated in reservoirs that are suitable for him, they should be deep pits should be plenty of feed and preferably access to a large water. In lakes and reservoirs catfish dwells in a pit all his life. In reservoirs over catfish goes on a feeding and quite often changes the pit.

Fishing for catfish in Ukraine is no different from the Russian fishing on the predator. Search its location is to search for deep holes and whirlpools in the reservoir. In a noisy place fish stand will not be long, for it is necessary to find a quiet place for fishing. If you found the hole by accident, go get a lottery ticket, as most anglers leave a lot of time, but often the pit did not find it. Usually, anglers do not tell others about the pits and catch them yourself.

Catching catfish in Ukraine, the most effective will in the summer, or rather in its second half. In the spring and autumn period catch catfish too, but not as actively as in summer. In the winter catfish fishing is stopped. 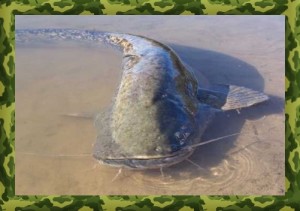 To catch catfish you both day and night. Like other fish. Catfish are best caught early morning and late evening. He does not have a specific time of going on a hunt. And the view of some fishermen that the catfish nocturnal predator is not quite correct. Habits and behavior soma directly dependent on the weather and the conditions in this pond. For example, on small rivers, where a lot of small rapids with rocks in the pit, catfish are usually fed in the evening, it is interesting that he floats on the same trajectory. Catfish and the trajectory passes through the hole and stranded, she can catch the depth more than five meters and less than half a meter.

After the discovery of the pit, where presumably there is som, we can draw a lesson from fishing is already half successful. Most often, the pit is accidentally. I, personally, found such pits when catching pike on live bait with a float rod, it was noticed that the gear began to float away deeper. Pulling the bait back I found only a broken line. A little after reviewing the literature, I realized that it was a catfish. As it turned out, the hole where he lived was located approximately 300 meters downstream. And it says that he went out to feed.

Very often signal the presence of catfish near the place of fishing can be the lead donkey, which stood on the night, while carp or carp. Chew on the end of the line can indicate to the angler that the snap was on som feed path.

There are cases when soma find on a visual level. Very common to see catfish in the upper layers of water. With their large size catfish don’t always find food undetected.