Wiring is carried out along the coast. In this case, the distance of the fishing will largely be determined by the length of the rod. And the maximum length of the rod, in turn, is determined by its weight and balance, as it is all the time we need to hold in your hand. As a rule, must be limited to a length of 5-7 m. the Most widely in the size presented by the Bologna fishing rods – most likely, among them have to choose. At purchase it is necessary to put on the rod the reel and test how they operate. 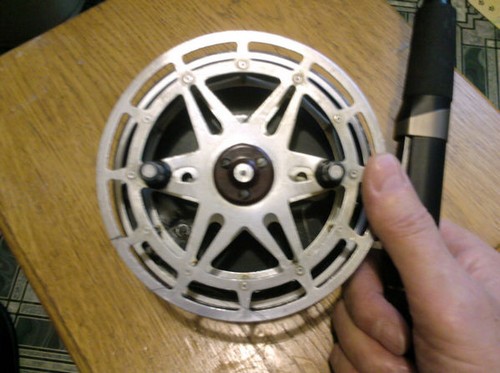 Since in our case it is about far casting tooling is not, then the best choice will be to ordinary inertia reel. Its advantage is that it leaves the line more efficiently manage the equipment and make instant cutting. At the time of posting the rod should be held so that the coil is in the horizontal plane of the drum up, for which it is possible to maintain bottom index finger and thumb ready to press the drum (see photo).

It should be borne in mind that the laws of physics, the smaller the diameter of the drum of the reel, the greater the force required for its rotation. It is necessary to increase the weight of rigging and lifting capacity of the float, which reduces the sensitivity of the tackle, or to play off line hand. On the other hand, the larger the drum, the greater its inertia. Can be considered an optimum drum diameter 100-120 mm.

If in our Arsenal of antiquated since remained unassailable old coil is what you need. (For example, I use the “Neva” a 73-year issue). However, the old reels don’t have bearings, and the size of their legs is not suitable for modern katushkoderzhatelem, but if hands grow whence it is necessary, these problems are easily solved. From the larger legs you can always make smaller (see photo), and the lack of bearings is quite kompensiruet fine tuning. 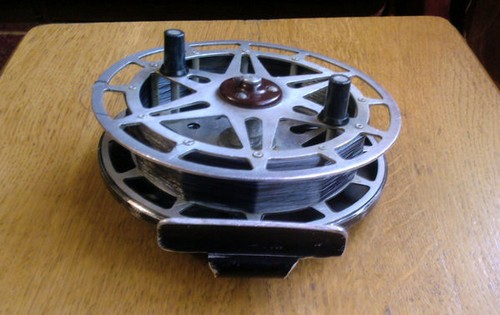 The coil should be cleaned from old grease and dirt, lubricate the axle with grease and the adjusting screw to adjust the position of the drum axis so that in the working position of the coil (in the horizontal plane, the drum up) the stopper was located, approximately in the middle of the groove and does not touch the axis (see Fig.). With either one of the brake drum should rotate if it is to blow. 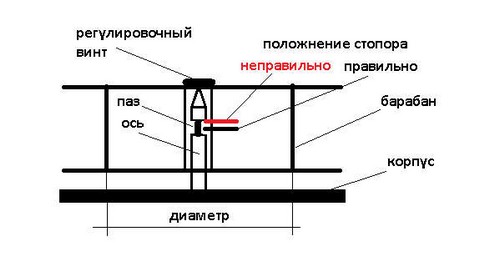 As the depth within reach of the rod will certainly be less than its length, then snap, it is desirable to mount on the base of the inner float. This snap more controllable. In addition, a small depth in place of fishing (hardly more than two meters), extra large sink rate shipping not required, and hence, the float can be sensitive enough due to the small capacity. How small depends on how well set up coil, but it is unlikely that more than 3-4 grams.

The length of the wiring is determined by the estimated length of the plume from the bait and conditions on the Bank. On the site posting for should be smooth (no twists) and uniform. The hook should be dragged along the bottom, so the ground along the path of the transactions should be possible without hooks or may be about to bite.

To determine the depth of the wiring can be as follows: – shift the whole ogruzka down to microventure, which will be attached to the leash, and set the depth roughly. Then do a test transaction. If ogruzka the bottom wasn’t getting the depth to increase approximately 10 cm; if clung – to reduce approximately 10 cm and to repeat the transaction. To find a position in which ogruzka one side is at maximum depth, on the other hand touches the bottom. Then restore the configuration to shipping and attach the leash (see figure). The length of the leash must be sufficient to compensate for the irregularities of the bottom, but usually not more than 50 cm. 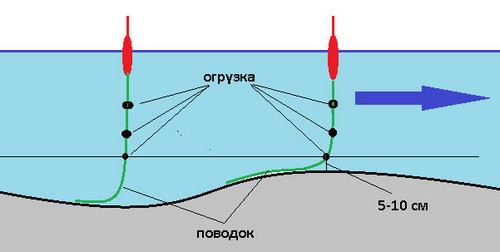 Point sukarma on the site transactions is selected so that after casting tooling managed to take the operating position to the approach to this point. Bait should erode fairly quickly and give a good train. Balls of groundbait thrown hand movement from the bottom up.

Boat greatly increases the efficiency of fishing because for fishing become available to almost all locations of the reservoir. If we bought the boat, but left it on the rapids of the river, probably, not in order to, as they say, “the change in his pockets tyrit”. Obviously, we expect to catch something from the shore to catch difficult. 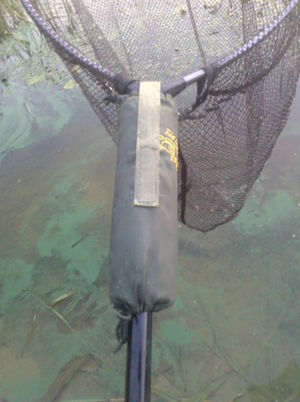 This “something”, most likely, you will need a landing net. To work with one hand with the landing net length of more than approximately 2.5 m, sitting in a boat difficult. Even if the landing net is equipped with a float (see photo) which does not allow the head to sink.

As we have already said that when playing big instance the length of the landing net and the rod length should be approximately equal to each other. The conclusion for fishing in the wiring from the boat is hardly advisable to use rods with a length of more than approximately 2.5 m (maximum 3 m). Anyway, to catch big fish. On the other hand, for sure the strike at long range, and even at great depths, it is desirable that the length of the rod was at least 2 meters. The widest range of rods in this range have a feeder (Picardie) of the rod. Likely among them will have to choose.

As the rod is quite short and having a big fish in a landing net is necessary on short Les (i.e., holding the rod closer to the surface), then, want it or not, equipment must be with a sliding float with two attachment points. The stronger the current and greater the depth, the faster should take ogruzka, the harder it should be, the greater the carrying capacity of the float, which can sometimes reach 10 grams.

The place usually chosen for posting on a flat area of the bottom over the edge or over the edge. And in front of the hole so that the fish memanipulasi from the pit up of small particles of bait that washed over into the pit. Therefore, the bait must have a lot of light nutrient fractions and be very dusty. Big fish became big because since the childhood behaved prudently and we must assume that close to the boat, it likely will not work. Therefore, wiring to do, at least up to ten meters. Therefore, the antenna of the float must be clearly visible. If the bite did not happen, rigging is tightened to the boat and released again.

At the time of posting it is necessary to ensure that the scaffold under the action of surface currents do not form a loop, otherwise when the strike energy will be spent on the choice of slack, and not actually cutting. Therefore, the drum of the reel must from time to time to slow down with your thumb, preventing the formation of loops of fishing line.

The boat is best to put on two anchors across the current. Zakim done with the boat in such a way that after the casting tooling has passed through the point sukarma and further moving within the boundaries of the plume from the bait (see Fig.). To bait soon reached the bottom, it can be mixed with clay in proportions of about 1:1.

If the current is so strong that it eliminates the visible demolition of the boat under the influence of wind, you can put a boat on one anchor (see figure). In this case SCORM can be done from the stern of the boat and from the boat.