In March, this fish awakens from hibernation. Small individuals begin to feed first. The largest stay in a state of winter sleep until the water warms up above 10-15 degrees. Therefore, catching carp in March is not able to bring big trophies. 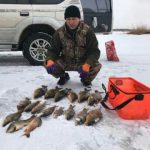 The basis of food small carp are bottom insects and mollusks. At this time, the breeding season of the pond snail shell and a number of other shell shells, similar to the pond snail lifestyle, ends. Small cubs appear between the valves, which have an immature shell and are a tasty morsel for the digestion of any species of fish. Moreover, such food also replenishes the resource of calcium and phosphorus in the body, which is necessary for the growth of young fish.

In the lower reaches of the Volga, the surface of the water is cleared of ice early. The same is true in the Krasnodar Territory, in the lower reaches of the Dnieper, the Dniester, the Don, where carp loves to live in backwaters and quiet estuaries. In the course of it can be found less often, and then only on the weak. The carp avoids places with a strong current at this time, if it does not move to the place of spawning grounds. However, the time for this has not yet come, its progress along rivers and canals will be after, approximately by the middle of April and the beginning of May.

As usual, for carp prefer to use bottom gear. The float at this time is not used as often as in the June warm days. The fact is that carp goes under the beach more often when young shoots from seaweed begin to make their way, when its digestive tract is already able to take plant food. And in the early spring months, even if the water is already warm, it doesn’t go too far to the shore, because there’s no need.

Favorite places of carp these days will be areas that are well warmed up by the mean spring sun. As the long-term practice of karpyatnik fishermen has shown, it should be looked for in the shallows remote from the shore, at a depth of no more than two meters. If somewhere there are distant tables, navels, distant bottom crests with a shell bottom – this is the best place for catching on the bottom carp tackle.

Choosing the right place for fishing

Catching near the shore is still bad because a large amount of fish stuff goes there. A crucian carp, a rudd, and roach, which live in the same places, will eat with greediness even large enough boilies. And if we take into account the fact that carp at this time prefers to take on a worm and other animals, then at all except the little things you will not see anything on the hook. 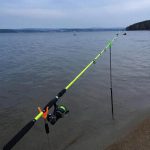 Obligatory condition – the presence of the animal component in the nozzle. Even if they use an ordinary boyle, they should be hooked to a hook of a worm, a bunch of maggots or other insects that can attract this fish. Some fasten an animal nozzle with corn so that it cannot be pulled off. This, though not always completely, but works.

When choosing a place for fishing it is worth to abandon the sections with the course and the rivers in general. The fact is that immediately after the opening of the ice, the running water is turbid from the melt water and turbidity from the banks entering during the flood. Even in the channels where the current may be completely absent, due to the spring phenomena, its turbidity is observed. In muddy water, it is much more difficult for fish to find a nozzle, therefore it is best to catch on a lake or pond, although they are opened from ice later.

A good result shows a catch on active bait. Oddly enough, the carp at this time can take to spinning. It is advisable to use live worms for the nozzle, which should be changed every ten minutes so that they do not fall asleep and move on a hook. Experienced anglers are advised to catch shells for meat. Well, maybe this is a really good bait. For example, the addition of the valves of old shells, collected on the shore and crushed into bait, can increase the number of poklevok.

The most bait should not be much. It is much more important to determine the place of fishing where the fish will be located. To do this, you must carefully examine the bottom of the reservoir. Examine the entire bottom, determine what it is, silty, clayey, sandy, gristly or silt. It is best to catch on the shell. Casting on one landmark is not limited. It is necessary to make fan castings at different landmarks, so that later you can put several rods at different points. As already mentioned, the main points should be shell shoals.

The bite on the chosen place usually begins at noon, when the water is warm enough. Carp with pleasure eats bait left for him in the shallows. And when she finds the nozzle, she takes it too. Pokovka he confident at this time, he almost always self-cuts. If hair equipment is used, the notch goes behind the lower lip.

Pulling a young sazanchik is a great pleasure! He vigorously resists, tumbles. Even if his weight does not exceed two kilograms, he is able to deliver a lot of positive emotions to the angler. At the same time it is possible to use not the heaviest and durable tackle, because it is much easier to handle a light carp rod. Such a sazan usually walks in flocks, and often it is possible to see not only the doublets of the poklevok, but also the triples. Poklyovki go in series, and here it is better to be alert and catch with a friend, so that you can immediately pull out a couple of rods, without missing a single fish.