Selection of fishing line for pike is both simple and complex. After all, with minimal skills, not everyone will be able to choose a good base option.

When forming any type of tackle on a predator, the fishing line as a basis should have the following indicators:

A fishing line for pike fishing for any type of tackle must meet these criteria, and the manufacturer can be very different. 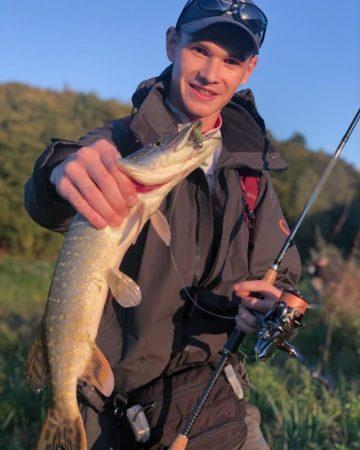 Important ! It is worth paying attention to the fact that the quality base should stretch a little, by about 10%, this will play an important role in obtaining the trophy, which often has resistance.

What kind of fishing line to use for catching pike largely depends on the method of fishing, that is, it is important to first think about how the capture will be performed. For bottom fishing in the autumn, thicker diameters with a large margin of safety will be needed, but in summer and spring, fishing lines for pike are chosen thinner. Next, we consider in more detail each of the types of fishing and find out the selection criteria individually.

The best basis for fishing with a spinning blank is a cord, with a small thickness it has excellent breaking performance. Wicker fishing line for pike is selected depending on the casting characteristics of the rod, as well as on the estimated size of the inhabitants of the selected reservoir.

The diameter of the cord will fluctuate from the time of year:

The fishing line is also placed on spinning rods, however, you need to choose from more well-known manufacturers with good casting performance.

Advice! It is worth remembering that the usual knots on the fishing line reduce its breaking load by almost half. For the formation of gear it is necessary to use special fishing gear.

This type of fishing is used in the autumn period almost before the freezing, therefore the base should be quite thick. Experienced anglers recommend using monofilament fishing line to collect gear.

The thickness of the fishing line for the cast is used decent, it is preferable to select for this a minimum of 0.45 mm in diameter and thicker. This is explained by the fact that a thinner trophy pike will break without problems.

A braid on a pike for a thrower will not work.

For equipment, only a monofilament should be taken, since no matter what the diameter of the braid, it will be worse to go with a vole and will be very confused with ease.

The thickness of the fishing line should be sufficient, equip the vents from 0.4 mm or more, depending on the inhabited fish.

What kind of fishing line is needed for the formation of float tackle is known to anglers with even little experience. Recently, snap-ups are also made on the cord, in which case a thinner diameter can be used.

A monofilament is put on a pike float 0.22-0.28 mm long, which is enough to catch the average size of a pike with this snap. Even large specimens in skilled hands will not get off the hook.

On the pike, the thickness is undoubtedly important, but the color scheme plays an important role. For spinning, especially in spring and autumn, bright cords are often used, even a small pike poke into the bait can be seen on them, but in summer this color can scare all the fish in the area. And the fishing line is colored, is it worth it to use bright options?

The use of a color base is often justified, only for this it is necessary to know some subtleties.

The bright colors of the monk are left to snap the spinning blank in spring and autumn, while the thickness of the fishing line in both cases will differ.

Which basis to give preference

Of the wide variety of fishing lines, three species are most often put on a pike, and we will talk about them in more detail.

The most common base type for any kind of fish. This type of fishing line catches both civilians and a predator in the selected water area.

They make it from high-quality nylon, it has one vein, and the subspecies are distinguished by such distinguishing features:

The first view will always be transparent, the other two can be colored.

Advice! When choosing a monofilament fishing line, you should carefully consider its vein, it should be transparent, have a glassy appearance. This is the key to the strength of your choice.

The process of manufacturing braids is based on the interweaving of several fibers, there are two types of such a basis:

Most anglers prefer the option without a shell, but the second is a success.

It should be understood that the cord will be less elastic, but the softness will be at a high level.

This type of base has its drawbacks and advantages, this is a special type of material that fishermen are very fond of.

Among the positive qualities it is worth highlighting:

However, significantly smaller discontinuous indicators prompted the angler to use fluorocarbon as leashes for any of the gear being assembled.

The basis for catching pike can be very different, everyone also chooses the manufacturer himself, but adhere to the recommendations and advice is necessary.

It is difficult for a beginner to determine what exactly to take as a basis for collecting tackle for a predator, because in shops today there are a lot of different options. The fishing line for the pike is selected according to special parameters, has several varieties. To choose the best, we will consider in more detail each of them.