Pike on the river behaves a little differently than in a closed area, the predator will not scour everywhere in search of food. She can be said to be an ambush predator, she chooses a more comfortable place for herself to catch her favorite delicacy, she is reserved for patience and waits for her finest hour. It is from these subtleties of behavior and should be repelled on future fishing on the river. 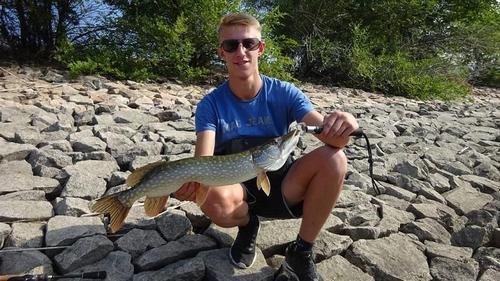 I can catch pikes on a river only by knowing these subtleties:

But to look for a predator on the stones is not worth it, he prefers sandy, clayey beaches and the bottom.

Pike on the river will perfectly respond to the standard spinning bait, will not pass by with live fish, and sometimes not against the worm. Pike is seldom caught in the reservoir with a current; few can boast with such a trophy.

What to offer a pike, so she drew attention? How to interest the predator?

Each of the baits will like, but not always. When fishing for pike in water bodies over time, weather conditions should also be taken into account: pressure surges, wind, heat affect river inhabitants as well.

How to choose a promising place

On the rivers, the pike basically behaves in the same way, it chooses for itself the most convenient place for parking in a natural shelter and waits for the victim. But in water streams with different currents, the behavior of a predator can vary, so it is worthwhile to find out the subtleties of its behavior, as well as to identify the most promising places for catching.

Pike on small rivers will not pass unnoticed, a small distance between the banks and the visible bottom relief will help to determine the most promising places without problems.

Pike fishing on small rivers takes place mainly from the coastline, and attention should be paid to such places:

This is considered a classic of the genre, it is here that you need to look for a toothy woman in the first place. In addition, it is impossible to pass with tackle and past the thickets of reeds and reeds, the water lily and rdest should also attract the attention of a real angler. Silent backwaters will surely delight you with your catch; it is worth exploring wide stretches of the river before the turn and immediately behind it, where the flow is minimal.

The plant has always been famous for the large trophies of the toothy predator, it is in them that often there is a weighty pike on a hook, which is not a shame for friends to show.

A distinctive feature of medium-sized rivers is a faster flow, and the distance between the banks becomes large. Consider the bottom relief from the coast is not everywhere, but about the snags in general you can not remember. However, as an option, it is worthwhile to carry out fishing of congested places on medium-sized rivers, it is from there that pike trophies most often reach.

Particular attention is paid on such bodies of water to places with a drop in the bottom topography, and the rolls and holes immediately behind them become especially attractive. In this place, fishing should be carried out especially carefully, using the entire arsenal of baits. Experienced anglers say that it is on medium-sized rivers in places with weak currents and for oxbows that the pike usually rests and hunts, especially often near small areas. On a pike of a large size go to deeper places, small life there will not give.

Narrowed areas should not be missed, pike fishing on a medium-sized river will be particularly successful in this particular place. It is best to search at the coastline of one of the sleeves, which are formed by islands. Slightly downstream, somewhere in the thickets of reeds or reeds and will stand toothy, fully prepared to attack the approaching inattentive victim.

Tip! For fishing deep places with sufficient distance between the banks, it is necessary to use a floating craft. Rubber boat fit perfectly, you can even without a motor.

Such water arteries are the most difficult for lovers of pike fishing on the river; vast expanses and decent depths will not allow working without. The device is most often used by anglers in such cases, not to detect the parking of fish, but in order to avoid hooks and survey the relief of the bottom surface. Using it, it is worth stopping and conducting a rounding up of places with a sharp collapse of deep indicators, a predator will be waiting for a tasty snack at the exit.

On large rivers, fishermen with experience recommend paying attention to places with large boulders and stones , often pike are ambushed behind them.

Exploring the water area, do not forget about the rapids and pay special attention to places with reverse flow, pike on major rivers loves to use such places as a refuge.

Interesting! In cloudy, little windy weather and in the rain, pike on large rivers likes to get warm in the shallows, you can even find it from the coastline near the reed beds.

However, there are exceptions everywhere. If you feel that it is here that you should try to throw one or another bait, then do it.

How to catch pike on a river depends on the gear used, spinning will require one tactic, float gear is completely different, but you just need to arrange the circles from the boat and watch. So that everything goes successfully, it is worth knowing and applying such subtleties:

It does not make sense to use other methods of catching pike on the river, the breech will simply be demolished by the flow, and the predator will not react to other species.

Pike fishing is carried out by different methods and with the use of a variety of baits, but not all can achieve success. To be with the trophy will help some of the subtleties that are shared with us by more experienced anglers:

Many prefer to catch pike on the river, although it is more difficult than on the lakes. But in case of luck, the angler will be waiting for a trophy specimen of a toothy predator.