Efficient and mobile tool for catching of a predator from the ice is a winter zhivtsovy rod or, as it is called, iuzovka. This rigging is simple and accessible to a wide range of anglers in our country. It can collect independently, problems with equipment will not occur even for beginners.

What is the winter iuzovka kind of fish it is possible to catch in our waters? 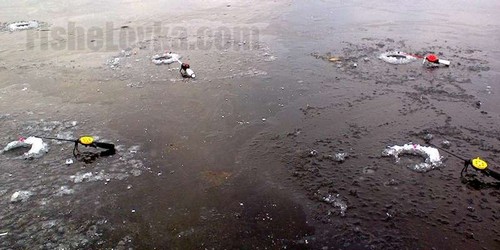 Zhivtsovy rod – what kind of tackle?

Many anglers hunting for a predator to successfully use such gear as imitation fish and summer gilzovka. In the winter zhivcova the rod is assembled all that is best in these two types of gear. Imitation fish taken from compactness and from the summer float iuzovka – mobility. The use of the equipment involves permanent contact of the angler with bait, timely fixing the bite, the possibility of fishing in difficult places with snags and grass. Equipment of different performances are not significantly different, which is determined by the fish that are being hunted. What the predator can be caught in winter iuzovka?

The species of predator, which caught iuzovka

In winter, many species of predatory fish continue to feed. Natural food is small fish. Due to the winter iuzovka possible to get big trophies, and fry on the hook does not cause suspicions of a careful predator. With proper installation and a properly selected point of fishing take a long time to wait.

In winter, anglers can count on catching the next fish.

The subtleties of the equipment

Fundamentally all iuzovka for fishing in the winter fry have the same equipment. There are just little nuances that are determined by the type of habitat and species.

It is important! Any reel before for fishing needs to be checked and adjusted. Not allowed galling during rotation of the drum or clutch.

In the winter iuzovka are two types of snap.

Tip! To tackle didn’t tip over when you bite or exposure to strong currents, the handle is loaded to the extreme point.

The choice of weights, as the hook depends on the bait. If Malek is able to hold up the weight with a weight of 6 g, the roach can handle lead olive with a mass of 10-15 g.

When hunting for bass or rotan apply small single hooks with a long forearm. For walleye or pike you can put counterparts. 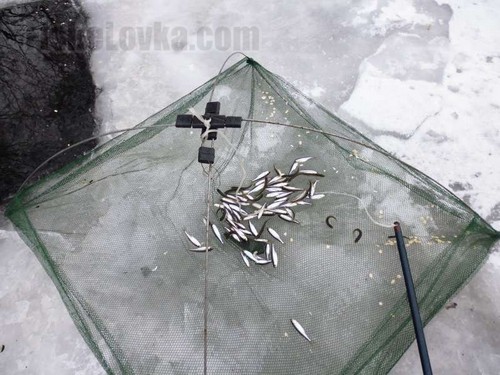 The bait fish and fry

Live bait for fishing should be selected based on the species of predator and the current prey base in a particular reservoir. Sometimes you have to buy live bait or harvest it in the fall.

It is important! The predator always prefers live bait, which is caught in the same pond. But the catch is a trifle problematic.

Photo 5. Can verkhovka to catch and a spider in the hole.

Tactics and technique of fishing

Tactically winter iuzovka has significant advantages over years of tackle or Gerlich. The angler it is important to take advantage of the opportunities offered by the fishing rod.

You first need to figure out the most promising places on the pond. You can do so on the well-known waters where the studied the topography and the nature of the seabed. On an unfamiliar body of water, you must find the differences of depths. To do this, drilled a line of holes starting from the coastline towards the opposite shore. Any kerb, pits, drop offs need to explore. You can then choose the direction the next batch of holes.

Attention! Predatory fish guards, when there is drilling holes in the ice. Therefore, it is better to make 10-20 holes and then return to the starting point and begin their oblaivanie.

Winter zhivtsovy rod allows you to get the predator in snags. The main thing in this fishing is not to miss a bite and give the fish to confuse a snap.

When fishing you should start exploring the hole from the bottom, gradually raising live bait in the upper layers. When will the first bite, it is necessary to remember that the horizon in which the bite occurred.

Iuzovka allows you to not only passively observe the float or pointer. To provoke predator to help smooth the rise and fall of the lure.

A good result given the large jigs that are installed instead of the sinker and the hook.

The playing big fish can be produced in two ways.

Attention! It is impossible to lower the coil into the snow or water. The clutch may be frozen, but the fishing line when the line breaks.

Live bait fishing has one feature. The predator may not immediately grab the bait together with the hook. Therefore, it is necessary to pause before cutting. The exception would be fly fishing in the snags. In this case it is necessary to consider the peculiarities of bites each fish. For example, pike grabs the bait across the body and then turns his head in the mouth. If the bait fish impaled on the back, the bite can be done immediately after the attack toothy. A greedy perch can swallow the fry, the delay in the cutting turns out to be a hassle with removing the hook.

Predator fishing on live bait in winter, interesting and profitable. Thanks to zhivcova the pole you can get a lot of positive emotions from bite and fight a worthy opponent.