Well, of course, with whom to begin a story about a fisherman’s catch, if not ruff! There is, perhaps, in the land of fisherman, who would be pulled from the pond in the light of day those thorns, carefully pretending that he’s actually a very important fish!

The tips here anglers looking for a specific how to “protect themselves” from ruff? Someone advised to use bait for the “white” fish, when “dogherty” thoroughly bored. And even better, suggest other, to catch on the nozzle, which ruff dislikes, e.g. maggots or dough. 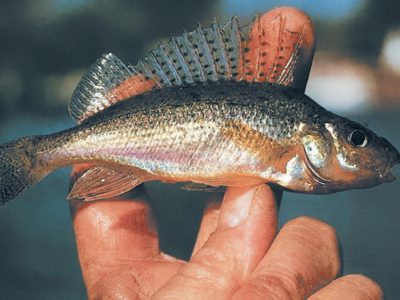 All of this, I assure you, nothing more than a fabricated lie, mistreat ruff. Who, ruff doesn’t like bait for “whites”? And you try brand pour the bait into the hole, for example, when the “polyarchic” enough is enough! From across the river come!HS ruffs here, if not for the satisfaction of appetite, then at least to just to see what’s going on! Well, and at the same time and swallow appetizing swinging on the jig bloodworms.

Maggots use? Wrote, probably the one who never ruffs in eyes did not see. Personally, I have formed the impression that the smaller the fish, the more he loves maggots. Large these little white fatty, perhaps disdain, but “polyarchic,” never. As for dough, bread, other vegetable attachments — do not say anything, it’s ruff contemptuously bypass. Although he might be the person to arrange another dirty trick, maybe the dough to eat!

One of my good buddy in those cases where “poder-Shiki” they do too, uses another “method”.

…One fine August morning, when there was just the East began to be painted reflections of the emerging day, we went out on the boat in the middle of one of the smaller lakes in the Smolensk region. Lake, rumored to have been rich in bream, fishing which we had intended to do. We came here for the first time, nothing about others, except bream, the inhabitants of the lake and is not suspected.

While I was preparing the bait, Sasha has managed to throw his tackle. And barely high float only just started to take a vertical position, as finely a sudden it started to shake. With a full sense that someone is there at the bottom having fun toying with hook, which is put on a delicious brush of dung. This continued for several seconds until the float still did not calm down. Sasha pulled out a tackle. Hook was, of course, perfectly clean.

The same thing started soon and I have. No matter how much I tried Sasha to detect the same malicious inhabitants of the lake, nothing worked.

Who is that?! For the sport of curiosity, I pulled out a small backpack winter spinning with lasocki-cobweb and tiny jig — always carry this with you, suddenly come in handy! Put it on a jig a piece of the worm and sent into the water.

As soon as the jig hit the bottom, as kevock of spinning sharply bent. I was immediately hooked… Nothing. Weird. I again tried to play a jig, but the game somehow did not go, there is a complete feeling that the jig’s someone in there. I’m hooked again just in case — nothing! Began to pull the rope, and lo! The lure dangled in the ruff! However, to call this a misunderstanding ruff was quite bold in size it was comparable with the jig! Imagine a small barbed head, which literally tail sticking out. All together it is about an inch and a half or two!

We in this place, of course, immediately swam away, not sparing the heap and poured out brand of bait. Nerves are more expensive! Ranked second, third, fourth! Everywhere faithfully eating exactly the same as the first time, “podjarski”. Well, maybe a little bigger, we were able to “even” on the hooks float fishing rods to detect. Sasha began to openly nervous. And somewhere after the fourth-pagago caught spiny miracle he growled, grabbed the ruff I.” bitten by the teeth in his head. Put the headless body on a hook and sent it all to the bottom of the lake. “And let, infection, enjoy, what with all their brothers.”

Oddly enough, the biting “polyarchical” immediately stopped. It can be really scared? Anyway, but Sasha in a few seconds dragged into a boat with a decent net of bream…

And that can be really recommend Sasha’s way all anglers who just “get” on the pond a tiny ruffs?

But in General, if to speak seriously, ERM actually is a very decent fish. At least from the point

of view of its culinary advantages! Anyway, nothing better for this primordial soup I don’t know.

And ruff is a favorite basis for the preparation of “sprats”.

Sometimes that ruffs become an enviable booty. In Belarus, on the border with the Pskov region, one small pond, surrounded by swamps, such that fish in this lake is possible in winter only. The topography of the lake bottom unsophisticated flat as a table. And here on this table are found… not even ruffs, ershisi! To fifteen centimeters in length, weighing more than a hundred grams — well, just dream of the fisherman!

Think of some effective ways to get rid of their bite, does not exist in nature. Much easier to use “fishing wit”: once you get to the pack “polyarchical”, take immediately the legs together, and… Maybe in another part of the pond these creatures apparently decided to pull a prank Maker will be less.