Going fishing with any gear, you need to carefully prepare, one form with a  reel  and fishing line will not be enough. An important element on which the outcome of fishing directly depends is the bait, without it the capture will not happen for sure. 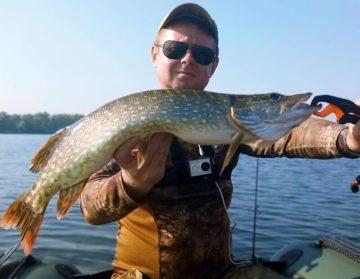 You can catch a pike in several ways, in the opinion of most anglers the most effective is spinning. An excellent form, the right equipment and proven bait will not allow anyone to leave the reservoir without a catch, but you need to know what to choose from. Spinning lures for pike fishing are very diverse, on which it is worth stopping your attention prompted by more experienced comrades.

Spinning lures for pike are divided into several types, while each of them can attract the attention of a predator no worse than the rest.

Different indicators influence the choice, among which the following will be important:

It is also worth considering the personal preferences of the angler, some prefer to be fished only with silicone, while others bite only on a wobbler.

Advice! A beginner spinning player needs to try all the lures and only then independently choose the one he likes best.

It is very difficult for a beginner to decide on his own; store shelves with tackle amaze with variety. That is why it is necessary to take a mentor with you or to independently study the range of products before the trip. We will try to help a little with the choice, for this we will study in more detail the most catching spinning lures for pike.

This type of pike bait is very popular. It is the wobbler that is most similar to real fish, and not only visually. They make it so that when posting in water, it imitates aquatic inhabitants as much as possible, most often wobblers imitate a dead fish or a very fast fry.

But this is not all information about the bait, wobblers are divided according to the shape of the body, for pike they are most often used:

The wiring for this type of bait can be varied, in most cases it all depends on the shape and characteristics of the reservoir. Twitch, uniform and uneven wiring will give the performance. In this case, it often happens that the angler must choose the most acceptable, and sometimes combine several at once.

It should be understood that this bait for pike is divided by buoyancy.

It is worth paying attention to the coloring, in the arsenal of a real spinning player there should be bright acidics, and baits with a more natural body color.

The size for the pike is better to choose more if you want to get a trophy instance of a predator.

One of the most popular for pike is a spinner . It often happens that a toothy resident of a pond does not respond to any of the proposed baits, namely a spinner attracts her attention and forces her to attack.

Experienced anglers recommend that you always have several varieties of turntables in the box, the most catchy are:

This type of spinners is the most catchy in Mepps, Blue Fox produces excellent quality and a specific form of the core, and those who use large Ponton 21 also have good results.

Many craftsmen make such spinners on their own, their products often outperform even branded items in terms of subtlety.

The color of the petal of the baubles is of great importance, its choice should be treated responsibly. It is advisable to have all the basic ones on a mandatory basis, but the acidic can already be purchased as necessary.

The pike reacts well to fluctuations throughout the year; the main thing is to be able to use them in water bodies. There are a lot of varieties of lures of this type; they are distinguished by their shape, weight, and color.

It is worth choosing a bait of this type, starting from the time of year, the depth of the reservoir, and the size of the inhabitants of the river or lake is also taken into account. Universal baits are considered models with a silver body, but gold and bronze from the arsenal do not need to be removed .

Acid-colored pike bait is also popular with experienced anglers, and most often the pike reacts to cyclops with this color . Spinner spinners are no less popular, they catch on lakes and rivers in different regions.

The wiring for such a spinner should be uniform, but fast. That is how the bait spoon can best simulate a fast-running fish, and the predator will rush to catch it.

Oscillators are equipped with ordinary hooks, often tees. But for wiring between a water lily or other bottom vegetation, it is better to put unhooked ones.

Silicone lures are among the most budget ones, another plus is that several types of installation can be done.

Approaching a display case with silicone, even the most experienced spinning player is confused. Current stores can offer a variety of baits of this type.

Nozzles for spinning on the pike are distinguished by:

Silicone is separated into a separate group from the edible series, there is also much to choose from.

The same manufacturers have been enjoying the greatest popularity for many years; their products always work and in any weather.

The wiring for this type of bait is used differently, it will suit both uniform, and twitch, and stop end go.

Pike are also caught on spinning with the help of other lures, but these are the ones that are used most often and effectively.

The subtleties of selecting baits by season

In order to always be with the catch, you must be able to pick up fishing lures for the seasons. It often happens that the same option works fine in the spring, but in summer and autumn the pike does not react to it at all. Only a fisherman with experience can conditionally divide, but here are some tips to learn together.

As soon as the ice drops off the pike, the spring pre-spawning zhor begins, but still cool water will not give it the strength to attack to the full. The water in most reservoirs has not been cleaned, along with ice in the thickness is a lot of garbage. Based on these features, they select bait for a predator.

The most successful options are:

In addition, the pike will respond well to spinnerbait and streamers.

In the summer, with increasing heat, the pike moves closer to the pits, sometimes it is very difficult to get it out of there. Another place of parking will be water bushes, a water lily, reeds during the summer heat become an excellent refuge, because the potential prey of the predator is there.

In summer, for pike spinning, apply:

A good option for summer fishing is the donka with live bait.

Experienced fishermen know that in the autumn the pike is very active, it grabs at almost any bait offered to it and swallows it with appetite. Before freezing, it is advisable to offer larger predators to the predator, but the colors can be very different.

The trophy will definitely pay attention to:

Fans of snacks grab an excellent result during this period, they manage to catch trophy pikes on live bait.

There are ponds that do not freeze in the winter. It is there that they continue to catch pike on a spinning rod. Of the baits, large-sized wobblers, silicone and oscillators are best suited. A feature of fishing will be the selection of a fishing rod, it should be the necessary length for long casting.

It is worth paying attention to the pike lures in the summer are different from the options for other seasons. But still, it is advisable to have a complete arsenal with you and are not afraid to experiment.

To always be with the catch you need to listen to the advice of more experienced fishermen. Many share their experience with the young, but personal observations in this matter will not hurt.

Pike fishing will be more successful if you apply such tricks:

For the rest, the spinner relies on his skills and knowledge, the previously studied bottom and features of the relief will help in catching a toothy predator.

Spinning pike baits are chosen according to different criteria, but personal preferences should be considered. After all, every fisherman himself can be said to feel his lucky lure.