Experienced anglers know that in the summer, especially on hot days, catching a pike is very problematic. The predator, like other species of water inhabitants, becomes sluggish and goes into holes where the water temperature is not so high. 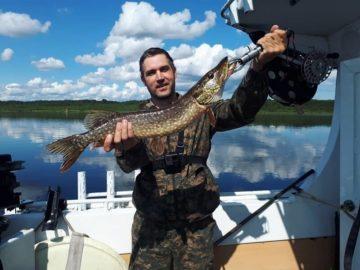 Many are reluctant to wait for the end of the summer, but real fishermen simply idolize this season of the year. During this period, all types of predatory freshwater fish begin to eat fat before winter, so they rush to almost any bait offered to them. This greatly simplifies their capture, everyone can catch trophy specimens of toothy predators without problems, and no one will be left without a catch. In the fall, various tackle gears are used, it is impossible to select any more catchy ones. During this period, you can catch a predator for any type of tackle and bait, the main thing is to have a desire and a little patience.

With a decrease in air temperature and water begins to cool down a little, their life-activators are activated. They come out of the pits and begin to eat actively, eating up reserves for the winter .

From the end of August to the beginning of September, the pike leaves its permanent places of parking and scours around the whole body of water in search of food. Often goes for food to vegetation off the coast, where there is still peaceful fish.

In October, the activity of a toothy predator only increases, it continues to rush at everything moving in a reservoir, does not disdain even its relatives who have not grown up. Searching for a pike during this period is necessary at decent depths , as its “food” has already moved to rifts and bottom edges. When choosing baits, it is worth paying attention to the fact that they should be immersed 3-8 meters depending on the reservoir.

November makes the pike more passive, the first frosts and the minimum number of sunny days do not allow the water to warm up enough. Pike passes closer to the winter pits, where almost all representatives of peaceful species from the reservoir have long settled.

Based on these features, it is worthwhile to understand that tackle for pike fishing in the fall should be strong. In the first two months, an active predator can cut off tender equipment, and in the last month of autumn, for its capture, it is necessary to use a base that can withstand heavy baits for catching the bottom of the reservoir .

Ways of fishing in the autumn

In autumn, tackle pike gears are used the same as at other times of the year. A feature in the collection will be the use of a thicker and more durable base. In autumn, pike are successfully caught on:

You can use float tackle , but it will be less effective.

In order to be accurate with the catch, you need to understand the intricacies of collecting gear for each of the above capture methods in more detail.

Spinning is the most effective of all the above. The use of artificial baits and their correct posting allows you to interest a hungry predator from the first seconds of fishing. Usually the pike rushes to the bait offered to it almost immediately, the main thing for the fisherman is not to get confused and immediately make a notch.

Leashes with high-quality fittings are required, an active predator will be able to easily eat the base during a rapid attack of the bait.

This type of predator fishing gear in the fall is represented by several varieties, each of which will be effective in the second half of the season. When the water cools down, the pike, following its potential victims, will go to the depths, to catch it, use gear to catch at the very bottom, that is, tossers.

Each of the above subspecies is collected from the following components:

But where to put it all depends on the chosen type of gear. A predatory feeder and donka are usually formed using a fishing rod with a hard whip and test parameters of 40 g or more, a reel, better inertialess with a good friction brake, will become another component. Bottom tackle with rubber and on self-discharge are wound on a reel, fastened on the shore by them.

This tackle for catching pike is truly universal, its varieties catch pike in different reservoirs and at any time of the year. They can be classified as a passive type of fishing, because the fisherman only needs to put the gear in the chosen place in the reservoir and wait for the bite. Necklaces are often used at night and as an auxiliary option for fishing. For their arrangement, you must have a watercraft .

To collect tackle for catching ponds in the autumn, it is worthwhile to conduct a little preparation. Several components are needed to collect gear, the base can be bought in a store, made independently or use available tools.

The components are wound on polystyrene cut in the form of a circle. One side is painted red, this will be a kind of bite signaling device. You can use not only polystyrene for this, an ordinary empty plastic bottle will be a great alternative.

In the fall, many types of lures are used for pike fishing, both artificial and natural. Depending on what type of fishing to be picked up and bait.

When fishing for pike in the autumn, artificial baits are used for spinning gear. Their diversity is very large, but still you need to choose a few.

For successful fishing with a spinning blank in the arsenal, each angler should have:

The use of spinners is also possible, however, in the fall, large sizes will become catchy. Turntables are chosen from 4 sizes, an elongated petal will work better on the river, and reservoirs with standing water are caught with more round ones.

These types of fishing require the use of only natural baits, it will take a very long time to wait for artificial catches. The best option would be live bait, namely a small fish from the same reservoir, where it is planned to capture a toothy predator.

An excellent option would be:

In late autumn, you can use lump fish for snacks, for other types of tackle and at other times of the year such a bait will not attract pike.

An important point will be to plant live bait, inexperienced anglers are better to see how others do it several times. Most often, the hook is planted behind the dorsal fin, while being monitored so as not to catch the spine. The least traumatic is the baiting under the gill covers, but it will take longer even for an angler with experience.

Subtleties of fishing in the autumn

Peculiarities of the behavior of a predator in the fall also make anglers use all sorts of subtleties to capture it. The cooled water and the approaching winter make the pike become more active in order to stock up on a sufficient amount of nutrients until spring.

Catching a pike in the fall is simple, but there are still some features:

Another feature and subtlety of autumn fishing is the use of stronger gear, since during this period the opportunity to catch a large pike increases.

Tackle pike is collected in the fall, the subtleties of fishing are studied, it remains to go to the pond and personally try the practical advice and tips.