Spring fishing in the wiring can be divided into two stages. The first begins immediately after the ice has disappeared and continues until the turbidity of the water coincides with the onset of snow melting in the fields and erosion of the ground. This is a very short period of catching, but often very productive.

The fish at this time rises along the rivers to the places of spawning, and from an excess of oxygen and a little force, the currents show unprecedented activity. Flocks are formed under the ice near the mouths of the rivers that flow into large bodies of water, and the active course begins with the descent of ice in the upper reaches of the rivers and the influx of the first melt water rich in oxygen. The search for fish at this time consists in determining the depth at which the main part of the fish goes. This is usually the average depth of the river, so you should not look for holes – the fish still bypasses them along the coast, and only individual specimens can stop in slow motion for rest.

First of all, it is worth paying attention to the upper part of the channel edge on flat sections of the river. The proper current and depth in such places allow you to comfortably and effectively catch them. The main problem is only moving from place to place. Deep snow drifts are not uncommon along the coast, in some places ice may come to light, and eaves of snow hang over the cliffs, ready to fall down at any moment. Therefore, when crossing the river requires special care.

One grieves – this kind of fishing is very transient, it often lasts only two or three days, then the water begins to arrive, it becomes cloudy, and the fishing stops. 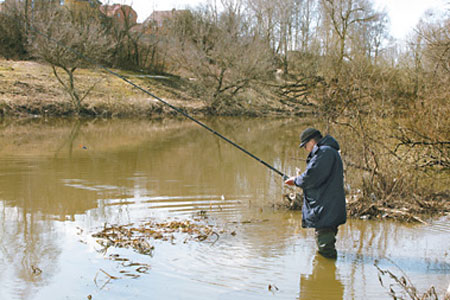 Much more chance for successful fishing occurs during the second course of the fish, when the main flood gradually disappears, rivers begin to enter the banks and the water becomes clear. Even having been mistaken with the beginning of the course of fish for several days, you can count on good fishing, because the first schools of fish are followed by the following, although not so numerous.

The fish does not storm the current, but goes along the coast at a shallow depth with a short rest in the coastal fossa, near the flooded trees and bushes, trying to save as much as possible for spawning. Looking for a fish stands near such obstacles and places where the flow is noticeably weaker. Most often, the success of spring fishing depends on the search for fish. If there is an opportunity, it is necessary to outline several perspective points and move from one to another in the absence of a bite.

Bait and nozzle for spring fishing

Since the water in the river is still very cold, the fish shows a weak interest in the plant bait and bait, and it may be mainly the animals that interest it — the bloodworm, chopped worm or maggots. They are rolled into balls of clay with a small amount of normal bait, for example, “Unicorm”.

It is not necessary to moisten the bait – the particles of dry bait allow clay balls to dissolve faster in water and additionally attract fish from a long distance. To be sure of the correctness of the chosen place for fishing, it is necessary to make several entries before feeding. This will clarify the bottom relief, depth, presence of hooks, and if there was a bite or fish caught, then the place is undoubtedly of interest.

Two or three balls of bait the size of an orange is enough to whet the fish’s appetite. If the current is strong or the bottom slope is large enough, then the bait balls are made constricted from two sides, like thick flat cakes. This form, although it will reduce the accuracy of feeding, but will not allow balls of bait to roll down from the point of catching. In the process of catching with a decrease in the activity of the fish, you should finish feeding with small balls of bait, the size of a little more than a walnut.

In addition to the bloodworms, worm and moldy worm, the caddisfly is out of competition in early spring. Sometimes the roach shows interest in steamed barley.

For spring fishing, the most versatile tackle will be a short, 4–6-meter rod with rings and an inertia-free coil, which makes it possible to catch almost the entire water area of ​​a narrow river. The main method of fishing is posting. This requires floats with a sufficiently thick antenna – it will not allow you to tighten the snap over the water, and they are very clearly visible at a considerable distance.

Obligatory elements of the float are two attachment points – only such a float does not sink and does not crawl out of the water during wiring, ceasing to show a bite. If the bottom of the fishing spot is clean and allows wiring without hooks, then wire will be a very effective way of fishing. In this case, the lower pellet is allowed to drag along the bottom, and a couple of pellets are removed from the tooling. The underloaded float pulls the leash with the nozzle along the bottom noticeably slower than the flow velocity. This wiring is especially attractive for bream and ide. The roach is more interested in the “striking” wiring, when the nozzle slightly touches the bottom.

With numerous hooks or among the flooded bushes, where it is impossible to catch in the wiring, the best tackle will be a half-boarder. In the simplest version, this is the usual float equipment, only the float is shifted to the tip of the rod. It is easy to upgrade – to put a sliding sinker and a smaller float, or to abandon it altogether.

When biting, the fish draws the line through the load and feels its resistance less, and the bite is fixed at the vershinka. But according to experience, the most effective rigging for a half-boat is a side leash: about 5 cm above the sinker the side loop knits and a leash 25–40 cm long is attached to it. . A half-bass allows you to successfully hunt bream, an ide and a guster, but due to insufficient sensitivity it succumbs to the cautious bites of roach.

Bail out in such a situation can only catch with a shortened snap. In the ideal case, this is a complete plug tackle, only the plug length is quite small – a 7–8 meter rod is almost always enough. Fishing with such a short rod is a pleasure! And from the usual plug-in equipment, absolutely nothing is needed: the roller will replace a backpack or bag, a bulky platform – an ordinary winter box.

Plug rod is equipped with enhanced, compared with the usual, snap and shock absorber rubber. At this time, frequent bites of large fish, which you have to drag out in cramped conditions, and catch among the flooded bushes, which, like insatiable monsters, require their share of hooks. One of the indisputable advantages of the plug is filigree wiring that can provoke the most suspicious fish to bite or circle the underwater tail without a hook.

In the absence of a plug rod, a telescopic rod, which is rather long (7–9 meters), can be adapted for a shortened snap. A shortened snap-on is installed on it, a meter and a half longer than the depth at the place of fishing. Instead of rolling back the plug, the knees of the telescopic rods push one into the other until the snap-in length matches the length of the partially folded rod.

In the ideal case, a telescopic rod, as a plug, is equipped with a rubber shock absorber, which takes all the load when the fish is pulled out. But if there is no such possibility, then the dodge is made by observing approximately the right angle between the rod and the fishing line. In this case, the cushioning properties of the rod are involved, and fish gatherings will be quite rare. That’s just not to pull the fish directly: breakage of the leash or gathering is inevitable. All more or less decent fish should be taken with a landing net, because a partially folded rod can not withstand the same load as the decomposed one.

Perhaps only a shortened snap can catch under low overhanging trees. It is no secret that in such places no one catches, and the fish loves to visit them, feeling safe and collecting the first spring living creatures falling from the branches. And how annoying it is when an excellent place has to be avoided only because the gap between the water and the branches is only about a meter. The shortened rigging seems to be created for such conditions, but the rod has to work in a horizontal plane. The only thing that is needed is a hollow above the angler, 2–3 meters high, sufficient to lift the rig from the water.

The equipment is chosen one and a half to two times heavier, compared to the usual for fishing in the harness, and the float – close to the spherical shape. This will allow you to perform high-quality wiring, even on a fairly strong course. The distribution of cargoes is the simplest: in two or three parts, one of which, the sub-tusk, makes up about 10% of the capacity of the float and shifts to the leash itself. Hooks and fishing line is chosen according to the expected trophy, the length of the leash is 10–20 cm.

Spring fishing is often very mined and catching the allowed rate is not difficult, especially for an angler armed with modern gear and knowledge, therefore, it is worth making a certain effort over yourself and releasing excess catch. Subsequently, it will definitely return with live silver bars and confident spring bites.