When catching pike on the spinning of any of the lures, the correct wiring plays one of the most important roles. During the passage of water thicknesses, the bait used should maximally mimic a wounded fish that tries to escape from a predator. Only in this case, the pike will pay attention to the proposed bait and go on the attack. 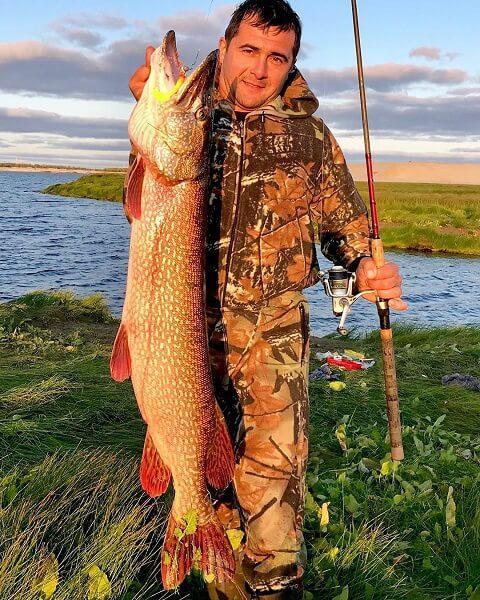 To catch a trophy on a spinning blank, it’s not enough to choose the right bait, posting to a pike is no less important. In order to provoke an attack of their ichthyoderm, it is necessary to select the correct speed and technique for passing through the water depths. This can only be done experimentally, but nevertheless, every angler should have some general ideas about it.

Experienced fishers most often use several types of basic postings, each of which has its own characteristics and is used for certain baits. It is advisable for beginners to familiarize themselves with the varieties before going to a pond, where it is already worth practicing the subtleties in practice.

Everyone knows how to do this type of wiring correctly, sometimes without even suspecting it. When fishing for pike, this method is considered the most simple and affordable even for children. The main role here will be played by the bait itself, the successful outcome of the work begun depends on it.

The tackle with bait is thrown to a given point and wait until the bait sinks to the bottom. After that, unhurried work begins with a coil, the essence of which is the uniform and unhurried reeling of the base.

To achieve the best effect, you can sometimes make short pauses, and then rewind the fishing line. Usually it is on a pause that the pike attacks the proposed bait.

Stepped wiring to the predator is carried out in two ways, each of which will be no less effective. The bottom line is that the bait in the water column would move in a zigzag fashion, then rise, then again sink to the bottom.

Let’s consider each of them in more detail:

Many people use this wiring, it is one of the most used for various types of lures. The attention of a predator is attracted not only by zigzag movements of the bait, but also by the turbidity created by it when it falls to the bottom. In addition, the bait makes it possible to create a specific sound that additionally attracts their living creatures.

This view is very similar to the previous one, performed using a spinning blank. The difference is that the jerks are executed as hooks, then the bait, sinking to the bottom, will make light oscillating movements.

This type of posting is used for active fish, when the water temperature rises to 15 degrees or more.

This type of feeding the bait to the predator is quite unusual, the wiring is carried out by the current. It is important to choose the right weight for the bait, most often the jig heads for silicone. The parameters are selected so that it goes just at the bottom, does not rise high in the water column, but does not bury itself in the upper layer of the bottom.

We found out how to do the wiring, in addition to this, it is worth knowing that this method is used in cold water, best of all in late autumn before freezing.

Twitching pike will bring more trophies in the autumn, when the predator is aggressive and rushes to actively moving bait. There are no specific rules and conditions for this type, it all depends on the angler himself and his skills.

The most used is the so-called acceleration-deceleration, we can say this is the basis of the wiring. Immediately after casting, it is necessary to wait for the bottom to touch the bait, then they slowly begin to wind the base, after a couple of revolutions the coil starts accelerating, it is carried out by 3-4 revolutions, then they return to the primary method.

Acceleration-deceleration is carried out only by a coil, other elements can be added. The motion will work out quite well when the undergrowth needs to be exhausted additionally.

This method has established itself as the best wiring for a wobbler , especially a two- and three-member. The essence of the method is that immediately after casting out of habit, we expect complete immersion of the bait and touching the bottom of it. Then, as slowly as possible, make 3-5 turns of the coil and stop. Next, the cycles are repeated with the same amplitude.

The bait will cause interest in the predator almost immediately, but the attack usually occurs at a stop.

In addition to the above, there are many more spinning transactions. Experienced fishers know that in this matter, the main thing is not to be afraid of experiments, to bring your innovations to the methods already proposed is not only possible, but also necessary.

Both beginners and more experienced spinning players know that each individual bait requires a special approach. That is, the wiring used is individual for each bait. The same method will not be able to present a jig and a wobbler to a predator equally well.

Jig options for bait can be carried out almost by any method, and each time the bait will play in a special way. The best are:

Demolition wiring is often used when fishing the area with foam jigged fish.

Postings to the pike for baubles are selected based on the speed at which it starts to work best. To do this, a small test is preliminarily carried out; on the shallows, several selected turntables and oscillators are carried out, and the most catchy tempo is determined visually. Usually for baubles choose wiring as follows:

Slow and uneven wiring is suitable for both types of spinners.

Wobblers for catching pike can be done in several ways, and for each subspecies it is better to use its own method.

It is not worth strictly adhering to these recommendations, it is important to feel the bait and make your own adjustments to the wiring. Sometimes a slight twitch or jerk such as a hook can cheer a predator, and he will actively attack the proposed treat.

Wobblers for pike can be very diverse, but the bait itself is not enough to capture trophy specimens.

There are some secrets, the knowledge of which will significantly speed up the capture of a predator:

The wiring to the pike can be very different, it should be selected depending on the bait and on the characteristics of the selected reservoir.