Since childhood, remembered moments capture wonderful fish minnow. But veteran anglers today are on the hunt for him. From late April through may, spring begins fishing for gudgeon on the float rod. Deserve such attention gudgeon 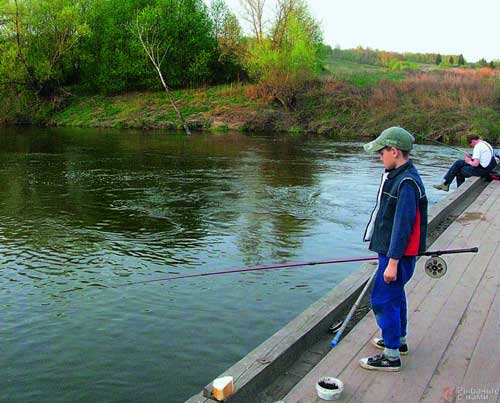 With the enlightenment of the water the fish began to actively feed near the coast, as in the tributaries that flow into ponds and the ponds on sandy or sand-gravel bottom. Often the fish caught in the area of the beaches when fishing the bait other fish.

The minnow spawns in late April – early may. At this time, the minnows dense flocks of trash on the sand or near the dam slabs and boulders than attract a variety of predators – Rotana, pike, perch.

Spring tackle for catching fish in April and may

A week after spawning, the fish starts to bite well in the mouths of flowing into the ponds tributaries, in the heart of weirs and spillways on the simple rod with a float, equipped with lightest snap-in:

In the spring, the fish usually bite eagerly, and noticed that it takes a good after the first rains on the part of a worm, a bunch of bloodworms, and by the end of may and some plant tips, in particular on the pellets of white bread. Catch usually the fast way or the slow posting, blowing nozzle near the bottom or dragging it along the bottom.

Where to catch minnows in the spring in April and may

Good to catch minnows near the dam, where there is a noticeable pull of the tide, and on rocky-sandy bottom below the dam. So at the Tsaritsyno ponds a lot of fish caught in the area of the spillway of the dam Top and the Bottom of the pond. The bevy minnow for their habitat often choose hollows in the bottom in the form of pits and ditches in the side of a strong jet or below the main flow, where the fast current moves in a slow.

In the second half of may successfully catch the fish in the small tributaries. For this angler comes in zapadnom overalls or high boots in the water, standing above the habitat of the minnow, and picks up the dregs from the bottom. Gudgeon usually quick going on a fast flow, so catch it with a short rod is way short of the wiring attachments. Such fishing is fascinating.