To catch pike and other species of predator both on the river and in the lakes, many different gears are used. They are divided according to activity and passivity in terms of application. To passive species include girders and zakidushki, but the girders are in turn divided into several subspecies. One of these subspecies are stalls, mostly assembled by fishers themselves.

Not everyone uses this type of fishing, for many it is very passive, but anglers with experience often set stalls, and then, if desired, engage in more active types of catching fish. This subspecies is attractive in that it is enough to check the exposed gear only a couple of times a day, pick up the catch and throw the gear again.

There are two types of deliveries that will vary slightly among themselves:

They collect gear equally, the components will vary depending on the reservoir and seasonal characteristics.

We assemble the supply yourself

In the distribution network, it is not possible to purchase ready-made tackle of such a subspecies; usually a do-it-yourself pike kit is going to. To do this, pre-buy the necessary components, and mount the gear.

Important! It is worthwhile to think over when fishing will take place and where. Find out in more detail what size specimens live in the selected reservoir.

Pike deliveries in winter have their own peculiarities; they use a slightly different basis for installation than for fishing at other times of the year.

You will also need a strong stick that will hold the stowage above the hole after the tackle is installed in the hole. 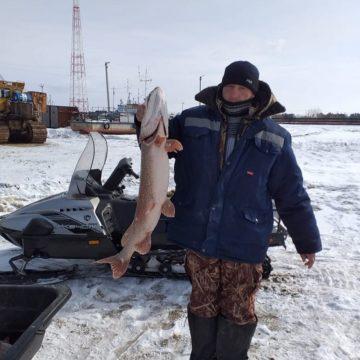 The rest is done directly while fishing, it’s definitely not worth it to plant live bait from the house.

In summer, fishing for pike can also be passive, for this use slightly modified lanterns. Putting supplies at this time of the year is better not from the coastline, but from a boat, it will turn out to catch a large area of ​​water.

The main differences between the summer and winter subspecies are:

The rest of the supply in the summer from the winter version will not differ in anything.

Where and how to catch

Catching pike for deliveries takes place all year round, the predator will respond perfectly to the proposed bait fish in the spring on the last ice, and it will not refuse such a bait in the winter, when all the trifle has long slipped into the wintering pits. In summer and autumn, this tackle is put up in water bodies at least, sometimes simply replaced with more familiar girders.

The most promising places for pike deliveries are:

They also install tackle near the snag, the pike often stands there waiting for the victim.

Important! Check the installed vents no more often than every 3 hours.

How to catch from ice

In winter, for catching on stalls, it is necessary to drill holes at a distance from each other of not less than 10-15 m. Their number depends on how many gear there are. They begin to arrange with the first drilled, and then they go catching on a spoon or doing other things.

Tackle on ice can be left overnight, for this purpose the stick is fixed on the ice more reliably, cover the hole with hay or a dry cattail, and cover with snow on top.

On open water, it is best to set up pike stalls from a boat in the evening, the distance between them should be 8-10 m. They usually do not touch them until morning, and check the catch with the help of the same boat at dawn.

They almost never catch tackle during the day; they can be used as one of the methods in the autumn period, before the first ice age.

It’s not enough to make and put tackle in a promising place for catching on stubs.

Fishing in this way will bring a good result, if you know and apply some subtleties and tricks:

Now everyone knows how to make a bite on their own. In addition, the tips and advice of more experienced comrades will help everyone to get a pike on fishing, and maybe not one.

There are not many passive types of fishing, they are not particularly popular among fishermen, but many people still make pike stalls with their own hands. This type of fishing is attracted by the fact that after the tackle is set up, you can safely do other things, including more active fishing.