In fresh waters of the northern hemisphere, including in the bays of the Baltic and Azov Seas, fishermen are happy to catch pike. A predator can grow up to one and a half meter sizes, while its weight will be about 35 kg. Such giants are extremely rare; options up to a meter in length and weighing 7-10 kg are considered trophy, but it is not easy to get them out.

It is easy to distinguish a pike from other representatives of the ichthyofauna, it does not look much like its compatriots.

The body color may vary depending on the characteristics of the reservoir, individuals with this color are found:

In this case, spots and strips of light color will always be present throughout the body. 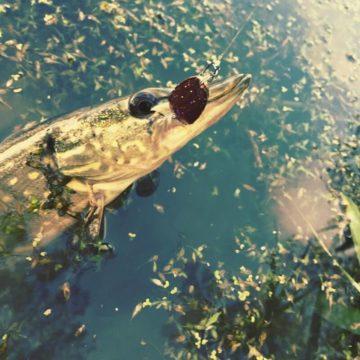 A distinctive feature of pike is the shape of the body, it resembles a torpedo. The head is also elongated, the mouth is powerful with many small teeth that can bite many materials.

Interesting! Pike’s teeth are constantly updated, old ones fall out, and young ones grow very quickly.

Ichthyologists distinguish between two main species of pike that live in our reservoirs, anglers with experience will also name the main differences.

Predatory sites are rarely changed, usually they are easy to find both in winter and in summer in the same place.

Spawning takes place in different ways, the first to spawn small individuals that have reached puberty, that is, those who are 4 years old. With one female, 3-4 males go to the place of laying eggs, and if the pike is large, the number of grooms can reach eight. Places for this are quiet with lots of vegetation. The development of eggs lasts from 7 to 15 days, this directly depends on the temperature of the water in the pond. The hatched fry cannot be stopped further; they will feed on crustaceans for the first few weeks. One and a half centimeter pike will not let out the fry and crucian caviar, and will not disdain carp in this form. The next life cycle will present the pike as a full-fledged predator, no one will have peace in the pond.

What to eat in nature

Everyone probably knows what pike eats; she is happy to drive any ichthyogen out of a reservoir. The basis of the diet is all types of fish that are in a single water area and not only. It is noticed that she prefers fish with an elongated body, round individuals are of little interest to her.

The pike will not pass by:

But this is far from a complete diet, sometimes it hunts animals.

In the mouth of a pike can be easily:

And it is not necessary that the prey was small, the predator can easily cope with a medium-sized individual.

Freshly hatched fry from eggs have a length of about 7 mm. During this period, they will actively consume crustaceans from a reservoir, namely Daphnia and Cyclops. Such food will allow them to grow and develop quickly enough.

When a male fry grows double its diet changes radically, small inhabitants of the water area will be of little interest to it. During this period, pike babies actively chase after newly hatched crucians and carps, do not give peace to perchs.

What does pike eat when growing up? Here her preferences are very wide, she, in addition to peaceful species of fish, will not give rest to her smaller brothers. Cannibalism for pike is the norm, exist in Alaska and the Kola Peninsula of the lake, where there are no more fish except for pike, a predator grows and develops there by eating its fellow tribesmen.

The name “grass pike” is misleading to many, some people think that the predator consumes algae from a reservoir. This is not so, she is primarily a predator and the basis of her food is fish. She doesn’t eat grass and algae at all, unless she accidentally swallows with a fast-moving fish.

You can find a toothy predator in many freshwater reservoirs. It will grow and multiply in lakes, ponds, rivers. Reservoirs are also a good refuge for a predator, the main thing is that there should be enough oxygen throughout the year. If this important element is not enough, it is likely that in winter the pike under the ice simply suffocates.

Experienced fishermen know where to find a toothy resident, her favorite places are:

It is here that the toothy will be ambushed, waiting for the movement of a small fish. It is easy to determine the location of the pike in an unfamiliar pond, fry of peaceful species of fish periodically scatter in open water from the pike in different directions.

To hunt mainly in the places of their parking, to become so as to see what is happening immediately after the observation post. Often its prey is the wounded inhabitants of the reservoir, but not only. Large individuals during the post-spawning zhora and in the autumn can eat prey only 1/3 less than themselves.

Interesting! The bream, the bream, and the puffer pike are practically not interested in because of the shape of their body, these fish species are more rounded.

We found out what pike eats in a pond, its diet is diverse and changes throughout life. However, from birth, she is a predator and never changes this rule.

The predator in the northern hemisphere is more than enough, the favorite trophy of many fishermen is the pike, they catch it both in Eurasia and in North America with equal success .. There are several ways to catch a toothy predator, each of which is based on the characteristics of nutrition. For successful fishing, it is important to know what pike eats in a pond, the range of baits offered depends on this.