The drop shot equipment refers to an exploded view, where the sinker and hook are removed from each other at a certain distance. It was invented and initially used only in the United States to capture the bass, but now with its help they catch fish all over the planet in casting. You can use this equipment for different types of predators, including pike.

To quickly catch the selected water area, jig equipment is suitable, but it can work only with high pike activity. If the activity of a toothy predator is low, then most spinningists will not catch. Lovers of variety will always be with trophies, drop-shot equipment can sometimes save from beakless when searching for pike.

Catching pike on this equipment has its advantages and disadvantages:

On drop shots, well-caught places are well caught, a reservoir with a rocky bottom. Catching at one point will bring maximum results, he will be able to attract the attention of a passive pike for sure.

How to properly assemble tackle and choose bait 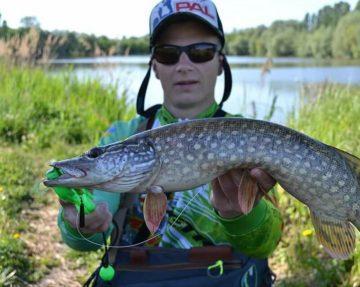 Drop shot on a pike will be able to assemble independently even for a beginner, there are no difficulties, the main thing is to pre-select the necessary components and connect them correctly.

All components choose excellent quality, so that the pike was able to hold on tightly.

As a leash, it is better to put a fluorocarbon version or steel, the pike can easily interrupt the other options. The leash length can be different, but not less than 10 cm and not more than 80 cm.

Hooks are selected single, installation is done with both conventional and offset. It’s worth picking them directly under the applicable bait to attract the attention of pike.

The sinker for the drop shot is selected in an elongated shape, it is he who can easily pass between the stones and snags at the bottom. Weight depends on the depth of the pond and the desired location of the bait.

A variety of silicone baits, both active and passive, are used as pike baits.

An excellent option would be:

The size can be very different, but less than half an inch is rarely used, perch from a selected reservoir can get ahead of a toothy predator.

Often a dead fish also acts as a bait, it is rarely used, but it is with its help that trophy specimens can be obtained.

Foam baits will also become a good type of bait for drop shots on pike. Especially anglers with experience praise the options for foam, which consist of several segments. They will work perfectly in the fall, just before the freezing.

Large streamers are also used as bait, but not everyone can catch this option.

Everyone chooses which installation is best done, it is better to try both and give preference to the one you like most.

Catching pikes for this installation will vary slightly from the other options, there are some subtleties. Having assembled the installation in one of the above methods, they carry out the casting to the selected place. Then they give the sinker and hook to the bottom, then exhaust the slack and begin to carry out the bait. The game is asked with a fishing rod, and everything depends on the preferences of the angler himself.

The most successful are:

You can drive the bait both uniformly and randomly, try different movements, but strictly make sure that the sinker remains in one place.

A good option is also considered to be a drag drop along the bottom when a whole cloud of turbidity rises, which attracts the attention of a predator. This is how anglers try to make the bait more visible when they catch the selected water area.

Drop shots in water bodies are used from cliffs and boats, this installation will allow you to catch thickets along the coast, as well as explore open windows among aquatic vegetation.

Fans of this installation recommend that beginners listen to these tips:

Everyone comprehends the remaining subtleties on their own, gaining their personal fishing experience.

Drop shot on pike has been used more often lately, this tackle can really attract a pike during its minimum activity.