The subtleties of choosing a bait depend on many factors, including weather conditions and the quality of the water in the pond, as well as personal preferences of the predator. First you need to study many subtleties, find out the preferences of pike, and only after that recover for the purchase.

Experienced anglers claim that wobblers for pike fishing in the fall are absolutely suitable for anyone. With the right feed and well-chosen wiring no one will be left without a catch. However, you should not try your luck and first figure out what kind of bait of this type should be selected for a successful outcome of capture in a single reservoir.

Regarding the water in the pond, the bait is selected based on such observations:

Depth will also be an important indicator, for autumn fishing, predators take wobblers with an average indicator in early autumn and deep at the end. 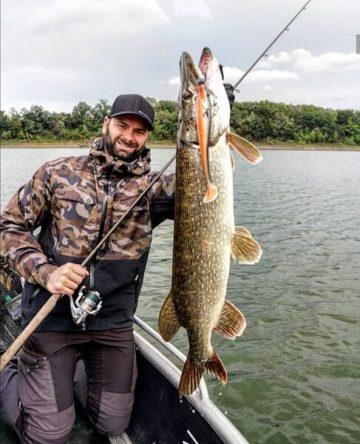 It is difficult for beginners to say which wobbler is best for catching pike in the fall. More experienced fishermen in this matter are more savvy, but many choose approximately similar models to those that were lucky to bring at least one toothy resident of the reservoir. But some parameters still exist, adhering to them you can easily catch pikes in almost any body of water.

With a decrease in water temperature, the predator emerges from deep holes and begins to slowly eat fat for the winter. In early autumn, this is not so noticeable, but with a gradual cooling, the pike begins to throw at almost everything. The color of the bait in this period does not matter much, the main thing is to properly submit and conduct.

However, according to experienced anglers, the predator still has some color preferences. What color does a pike like a wobbler? At the beginning of autumn, preference should be given to acid workers, while models with a natural color, but always with a bright tummy or head, will also work. From mid-autumn, color will play less and less role, the main thing is wiring.

The best wobblers for pike will vary in buoyancy, too, it all depends on the temperature indicator of water:

Strictly adhering to these parameters is not worth it, sometimes experiments will help to interest, pinpoint and display a captured instance.

It is not so easy to determine the most catching wobblers for a pike in autumn in shape, in many respects this indicator depends on the personal preferences of the fisherman and the fished reservoir.

The following are recognized as the best:

Poppers are also sometimes used, but their work will be effective only at the beginning of the warm water season.

Catching pikes on a wobbler in the fall will be successful with the use of models of different sizes, but the classics that work always and everywhere are mine. The length of such a bait can vary from 90 mm to 150 mm, while you should not be afraid of the absence of bites. In the autumn zhor, even a small predator does not disdain to chase large prey.

The remaining parameters are not so important, or rather not at all. If there is a predator in the selected body of water, then almost everyone will be able to catch it on a wobbler in the fall, having pre-selected the right bait.

You can experiment and buy models of bait for catching pike at your discretion. As a help to the beginning fisherman, there is a rating of the most catching lures, compiled from surveys of more than a dozen fishermen from different regions.

Having in your arsenal at least a couple of the above wobblers you will always be with a catch, and catch trophy pikes on each fishing trip.

Catching a pike on a wobbler in the fall will be more successful with the use of some tricks that are known to anglers with experience. Beginners should know this:

The best adviser will be personal experience, so if you seriously decide to do spinning, namely catching a pike, then there should be as many trips to water bodies as possible.