IDE was once widespread in all regions of the European part of Russia, Siberia and the Far East (up to the Kolyma river). Now its numbers are greatly diminished. This fish likes deep rivers, and flowing lakes with moderate flow. Prefers shallow channels, flowing lakes, deep streams and creeks. 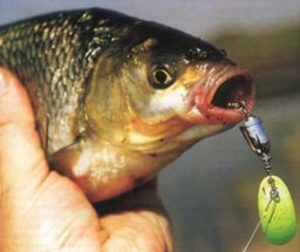 Yaz — the fish is beautiful, resembles a large roach, but has a thicker body and wide short head. Scales the IDE is very shallow, sides bright silvery with a faint Golden sheen. The upper fins and the whole back, have a blue-dark color, and all other fins red. Eyes yellowish-green, they fit perfectly into the whole look of this memorable fish. IDE is relatively small, usual weight is from 1 to 2 kg. Very rare individuals who have reached a weight of 4-5 kg.

Spawning IDE out in April (in southern regions) and in may in Northern ones, when water temperatures reach 6 to 9 degrees. IDE is grouped in flocks, and strive to progress in the headwaters of rivers to the spawning grounds. It is usually small bays, oxbow lakes, meadows. We IDE small (size of a millet seed), yellowish. After spawning it goes in the muddy deep ditches and pits. Some time it is inactive, it hurts; small species gather in large flocks, and large IDE kept in small groups of 5-15 pieces. From this moment begins the active power and hunting (mostly at night, in the early dawn hours and evening sunset)

Bullhead is omnivorous fish. He actively eats insects, worms, larvae, selcount, the young shoots of cattails and reeds, never misses a chance to catch the fry. But in summer its diet is dominated by plant foods. Loves the steamed seeds of cereals (wheat, barley, etc.). If the IDE is hungry, he takes the bait quickly and decisively. Float at this time, dives swiftly into the water; cutting these seconds should be done quickly. Fish this nimble and strong; he immediately pulls the gear into the depths. Fisherman have all the time to withstand it, to prevent the slack of the line. Several times during the fight, we should let him inhale the air gradually weakens the IDE and it can be brought to shore and raise the net.

How to catch IDE.

Most anglers used to fish for bullhead with a float rod, spinning, bottom fishing, and jig. On the deep rivers with moderate flow, showed good fishing on long (4-6 metres) of the rod with a side nod. (Actually, the nod is appropriate when fishing on low flow). Jigs are usually used medium size (“ant” or “pear-shaped”). After the flood, in the spring of IDE goes well with a ground rod, (it can be used in combination with the feeder-sinker).

Fishing spinning becomes acceptable after clarification of the water after the floods. IDE is very good lure for perch. It is only necessary to use the smallest sized petal with tee (given that the mouth of a small IDE). He prefers copper dull, closer to the dark spinner bait. If fishing is in bad weather, it is necessary to use a lighter spinner. Quite often, some fishermen use small cranks. Exploit the deep muddy holes, where the fish like to hold during feeding, as well as the boundary between the shallows and deep. Good speed harness spinners. Preferably the spinner to the jet flow to the pit, this moment happens to most of bites of IDE.

When to catch IDE.

IDE does not like unexpected cold snaps and very sensitive to the slightest changes in the weather. It is necessary to consider when choosing a place of fishing. Very favorable for good bites South and South-West breeze. The best hours for fishing — a quiet evening just before the dusk or the early hours of the morning dawn.