As fishing studies show , most of the food pike eats in the spawning period – about 50%. Slightly smaller part of the food eaten and, accordingly, the possibility of perch biting, occurs in the autumn period, even less – in the summer, and in winter the pike perch eats only about 3% of its diet. Since it is prohibited to fish it during the spawning period, autumn is the best opportunity for a spinningist to get this fish on its hook. 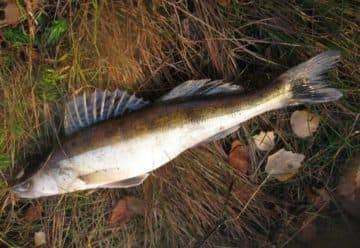 Autumn activity due to the fact that the fish is trying to prepare for a long winter. In addition, rivers and lakes at the end of summer and early-mid-autumn have the lowest annual water level, and if there is little rain in autumn, it stays that way until freezing. The water area is reduced, and the number of inhabitants in it remains unchanged. The fish must move away from the coastal areas to the depth. Trifle rolls from safer places to the pits, where pike perch and many other predators are waiting for it. Pike-perch seasonal zhor is not only associated with changes in the body of the fish before winter, but also with easy money.

As you know, its food is made up mostly of small fish with an oblong body. This is a roach, bleak, which departs at this time on from the surface deeper, minnow, ruff, some other fish. The pike perch does not disdain also with water insects, crayfish, bugs, even worms. The pike perch has a stomach, as well as the majority of predatory fishes of our reservoirs. It is arranged according to the perch type – medium capacity, it has three appendages that aid digestion. Acid gastric digestion helps pike perch the metabolism, plenty sated and not eating for some time.

Typically, this feature helps him to adhere to the daily rhythm of nutrition. The same individual goes on the hunt once at a certain time of the day, and then, having filled his stomach, moves to the places of the bed where only the fish that seem suspicious and can claim the territory can eat the fish. A related feature is the hunting of a full pike perch. When jigging and spinning fishing, rather large provocative baits are used, with which they plodding the same place where a well-fed fish can be found. When the bait bothers her, the pike perch attacks her. 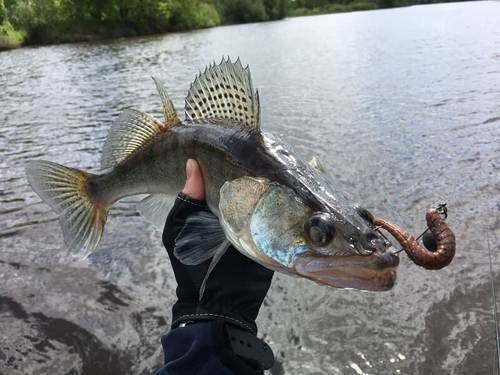 Fish is gregarious. Usually, by the fall, the size of the flocks increases, since it is easier for large groups to defend the territory from other types of fish in winter camps, hunt and notice the danger in time. However, the largest perch, which have no natural enemies in the reservoir, except man, prefer to stay alone. They feed much less frequently, and are not as often hooked as small and medium-sized pike perch.

The pike perch tries to avoid a bright sunlight, as its eyes are more adapted for sight in the dark. The sun blinds him hard. There is a way of catching it, when mortals are built in small places, covered with tied up straw or reed. The pike perch which has left at night will hunt on a sandbank in the summer and lingering there, hides from the sun under shelter There he finds a bait fish and gets hooked. In October, the sun is already much less active, and it increasingly goes hunting in the daytime.

It is easiest to track perch movements in the fall. Usually, these are his daily movements, which at first can be seen from the boat using the echo sounder, and then using spinning and biting fish to determine that it is a pike perch. On the reservoir, where you plan to catch all the time, you can track these daily movements and use them in further fishing. It is recommended to track the locations of pokolyovk on the navigator, record the size of the fish and the time of biting In the future, about the same routes pike perch will adhere to and in winter. In the fall, you can lay a good base for winter fishing, when pike perch is perhaps the most desirable trophy for the angler.

Pike-perch pressure can sometimes play a role. It is noticed that this fish bites a little better when the weather starts to deteriorate from bright to rainy periods. At this time in the water a little more oxygen, as research has shown. However, the main source of oxygen in water is photosynthesis, which occurs even in winter. The increase in oxygen from the pressure compared to this is negligible. Therefore, it is unambiguous to say about the effect of pressure on catching, nothing can be, it is necessary to conduct serious research. 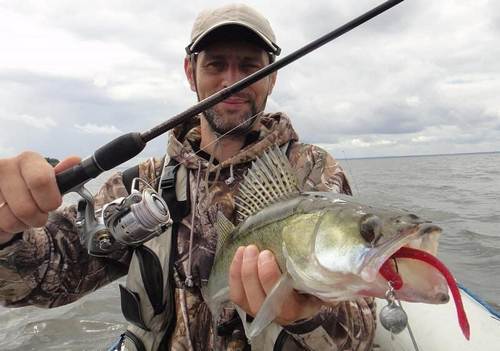 There are several of the most popular ways to catch zander in October:

Pike perch fishing on turntables – this method has been known since Soviet times. Such blades on pikeperch are fairly easy to use, do not require much dexterity from the angler, and do not impose special requirements on the form of the rod or reel. However, given the weight of the turntables, most often used for catching perch, such fishing should be attributed to fishing for light and ultralight. In addition, they will fall too long into the bottom layer at a great depth, and the accuracy of the entries will be lost. Still, better turntables work at shallow depths and catch perch in the summer at night.

The most popular way of catching zander in autumn is for spinning anglers. It is used throughout the fall – in September, October and November. They practice fishing on silicone fry, brooms, silicone crayfish, mandala, jig spinners. They catch a classic jig with a load of Cheburashka and a snap-shot snap-in, which helps to catch Sudak pits centimeter by centimeter, finding a passive perch and forcing it to peck. The heads are used relatively rarely, as they suggest a more uniform wiring in the water column, and not a game with a thud at the bottom.

Catching on the leash

Fishing on the diverter leash is not used as often. This method is more suitable for catching perch. Those who want to have a small but stable catch in the autumn should try such fishing. In autumn, the perch is stifling fry in the coastal zone. You can catch very good bast shoes using a jig snap-in with a diverter lead. It will be a great practice for a beginner who takes the first steps in catching a jig. Fishing for microjack pikeperch practically does not apply. For mikrodzhiga use lightweight bait, which work in the water column, and pike perch is better to catch on the jig, walking along the bottom steps.

Regarding the jig baits and their wiring, you can say the following. All baits are divided into two types – which have their own game on a uniform wiring, such as twisters and vibrating tails, and which do not have or almost do not have such a game, such as foam, worms, octopus. For the latter, be sure to use edible silicone or flavor impregnation. They are often lacking a passive pike perch, and can easily spit out if they feel a trick. It is also desirable that all baits have a fluorescent color and are clearly visible in the underwater autumn haze.

Trolling is a fishing method that helps you quickly find an active fish in a large area and provoke it to bite. It is very effective when searching for fish trails, as it allows you to find them in a short time over a large area. However, for successful trolling, you need a good boat and a good motor. We need a four-stroke engine, which usually requires permission, because fishing with a two-stroke player under the ear all day can cause not pleasant fatigue in the end, but a nervous breakdown.

Trolling on deep-sea wobblers. Be sure to use the echo sounder to track the bottom drops in time, to speed up or slow down the lure, so that it goes approximately parallel to the bottom. A good echo sounder will show not only the fish and the bottom, but also the position of the wobbler, if it is not more than 30 meters from the boat.

Fishing in a plumb bob will also require a boat. However, a powerful motor is not required in this case. For fishing, the on-board rod and the balancer of the winter type are used, but slightly larger and in a luminous color. When fishing, they try to determine the position of the fish by echo sounder. Then all along this pack follow, keeping the boat at a very low speed and adjusting the course with the help of rare paddles with oars, using a water parachute or an electric motor. When moving, they swing the rod, playing the balance bar and tempting the pike perch to take the bait. Even if the echo sounder does not show a perch, but a white fish, most likely, this flock is followed by a predator.

Fishing for live bait in October is usually practiced by those who catch the burbot. It can be a catch on a pole, on a donk with a rubber band, on a breech. It is worth remembering that the majority of livelihoods do not tolerate long-distance casting of a donk on the water and may simply die while receiving a concussion. The fish on such dead bait takes reluctantly. Therefore, for grouper bottom fishing suitable peremёt and gum. They allow you to deliver live bait to the depth smoothly, without dizzying flights through the air, followed by a blow.

With such a catch, most of the catch will be burbot. But the perch can also be successfully caught, if you put the harpover so that most of the hooks go along its path, discovered earlier. It is likely that all of them will be hung with valuable fanged trophies and no less valuable with a chin on their chins.

Sometimes, especially in fish-rich areas, in Astrakhan, in Akhtuba, in the lower reaches of the Volga, you can see the autumn pike-perch fishing in circles. Of course, in the presence of a boat. Practice in more northern areas shows that pike takes the circles more often, and best of all in the summer, and not in the autumn pike perch. However, if you have free time, you can try this way of live-fishing. The echo sounder in the fisherman’s arsenal has long made mugs not so effective compared to spinning. It allows you to purposefully follow the school of fish, rather than waiting for a bite on a wide front of the circles. Yes, and they will have to chase them all over the lake, breathing for oars or thundering by a motor.