Catching burbot in winter, on a donkey, and the gear is very simple:

As bait use either small fish (e.g., verkhovka), including a drowning, or cutting — pieces of the larger fishes: ruffe, perch, roaches there. In the Ladoga lake and the Gulf of Finland burbot caught good chunks of smelt. 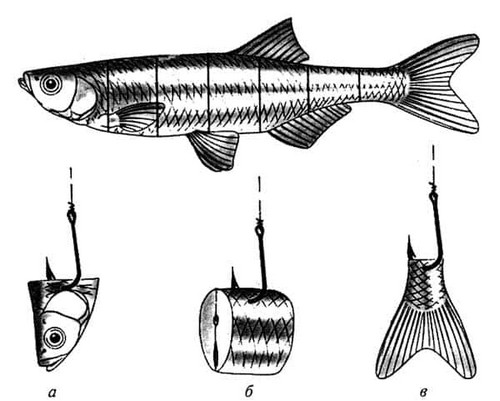 In the fishing literature there is mention of these winter tips for catching burbot, as meat, bacon and even a bird’s giblets. Don’t know, never tried. For meat and fat, the farm will always be a more useful application, and guts — not too aesthetic nozzle.

There are supporters of catching burbot exclusively on live bait, and often these fans are placed on the brands double or tee two or three Piskaryov, rarely brushes. Say natseplenny one hook two or three bait fish can not handle burbot detail, and at the same time afraid of each other, flutter, and noise, and attract larger fish, which swallows the whole company.

Noise burbot is really attracting, but when you consider that single hook is enough to spread 1/3 of the fish, it turns out that consumption grows live bait when fishing “on a bunch of minnows” 6-9 times. In addition, the living head can easily attract pike, but its on burbot bite the Donk very rarely conclude with the extraction from the wells toothy predator.

Make a universal set suitable for pike and burbot, hard metal or Kevlar leash burbot do not scare me, but pike need a decent supply of spare fishing line to sail with the bait in his mouth and safely swallow, and her mustachioed colleague immediately uses this stock to hide in rocks or driftwood.

Some fans put on their winter donkey two hooks, explaining that the opportunity to catch two burbot, and the fact that you can use on one tackle from two nozzles: a worm and a piece of fish, for example.

Tactics for catching burbot in winter, on a donkey

But this is not the case when the number of hooks on a gear is proportional to the number of prey. “Doubles” at the winter market happen very rarely. It can be assumed that the two burbot caught only when we approach the ground and swallow the bait almost simultaneously, and in other cases the fish scares others. And half the nozzle gets wet in the waste water and to produce in the winter, and worms, and live bait is much harder than in the summer, spring or fall. Besides fishing rules govern the amount of not donok and hooks on them — and better not be lazy and drill twice as many wells, the production will pay for the works.

Baited fishing line is lowered into the pond so that the burden on the bottom, and the scaffold had a small slack — water level changes even in the winter, and the taut rope while climbing an ice field may hang without touching the bottom. (In the reservoirs of hydroelectric power plants, these spikes can be very high, up to several meters, which creates a lot of inconvenience for fishermen: little joy come in the morning to the market and discover that water in the shery, and the gear pressed to the bottom of the lower floes.)

Then a fishing line tied to sticks placed across the hole. Trotlines are set in the afternoon and checked the next morning, and when fishing with worms it is desirable to set the gear back later, after dark, to avoid attempts on the nozzle of small fish.

If the pond is home to crawfish (continuing and winters can get fairly active lifestyle), they bring a lot of inconvenience when fishing: and worms, and cutting often suffer from their claws. In this case, it makes sense to break a successfully bit on the side big lane and install it or am rachni-samolotu with the bait — a piece of spoiled meat. More fragrant for crayfish bait to distract them away from burbot tackle, and the catch would be made a pleasant variety.

In crowded places and gear, and a hole masked by a layer of loose snow, which also serves as a good insulator, not allowing the holes to freeze. It is desirable to mark every Donk with some identification marks, in order not to lose after a snowfall and fish, and tackle.

In extreme cold the water in the hole deep freeze, even under a layer of snow, and check gear it is better to go with a successfully, and not with ice screws. Transparent fishing line, by the way, it is very easy to cut neznaja successfully, so some fans of winter fishing burbot tie meter long thick copper wire to the stick laying across the hole. And already the lower end of the wire main line donkey. Frozen in the ice the wire more visible, and will stand if it is accidentally hooked blade successfully.

How to check donkey in a frozen hole

There is another way to test the market, thoroughly frozen in the ice. Almost flush with the deserted drilled another hole and the line goes from new wells are l-shaped wire hook or, in his absence, the assistant device, made of two connected angle bars and the largest of the available hooks. When a sufficient depth for the shery length gear allows you to pull a burbot or hook up with eaten away by the nozzle on the ice. But if the place is small, and the ice is thick, then I have to reset the stock of fishing line from the reel and drawn through the first, frozen the hole. The line in the corresponding segment in advance is necessary to lubricate with vaseline, then she will not freeze to the ice and would slide freely through it. If, after several inspections of the catch not, then untie the fishing line from the reel and stretch the second hole, on the inside, then cut a Donk and put in a new place.

In those places where I used to catch burbot in winter, winters in the last two decades are rare, and resort to such tricks need not enough better to insulate the hole. Some anglers are advised to apply for this discoid hatches of solid foam, the diameter equal to the hole. Method is reliable, but quite time consuming. I in such cases use soft packing foam, crushed to granules. The hole is covered with a layer of foam pellets can withstand frost of a few degrees for two days and is easily cleaned with a simple scoop. 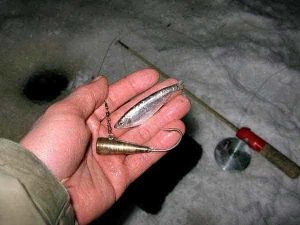 Ways of catching burbot in winter

We have reviewed the catch on trotlines, but that’s not the only method of extraction winter burbot. How else can you catch burbot during the winter:

The so-called “butting” — an even more simplified version of the winter donkey: line and sinker replaces the pole stuck in the bottom either vertically (in the presence of flow) at a slight angle. At the lower end of the pole ax is a deep notch, for it salesthese loop the leash, as on the winter ground. In the rest of the fishing by means of “tychek” is no different from catching a market. 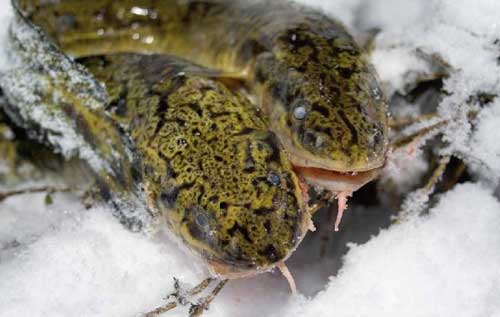 So convenient to catch in shallow forest streams, where the material for “tychek” not far to seek. The benefits from this primitive tackle the following: little to no risk of hooks; the hole, you can safely clear a successfully, not fearing to cut the line, not as something extra to mark the gear, the upper end of the pole is visible even after a hefty snowfall (the latter is important for the wilderness, but in the upper reaches of forest streams loitering public is not common).

Often, burbot tackle, placed near the house, I check once a day — in the evening, after work. And not to waste time on fishing bait fish, close down under the ice 2-3 gusset plate with fine mesh — available in them, the perch and plotnicki immediately be cut in the nozzle.

One Comment on “Winter fishing for burbot on a Donk”