Usually anglers winter roads go fishing when the thermometer outside the window shows below -10 degrees Celsius. In really cold weather to catch, not only cold, but hard — tackle is subjected to high loads, constantly frosting braided cord, etc. Analyze how and where to catch in the winter on spinning in open water. An example of the fishing, techniques and tooling will be fishing in Moscow and the Moscow river. 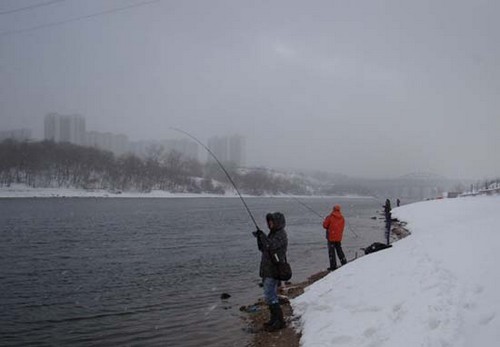 Where to catch in the winter on spinning

But there is in our midst and possessed by anglers, who travel on the river even in 20-degree cold. In Central Russia, many fully or partially ice-free waters, but many of them have to travel from the capital a few hours. Whether it is the Moscow river! To fish from dawn to dusk on the cold strength and patience not always enough, but here the residents of the capital and Moscow suburbs can go for a couple of hours spent on the road a minimum of time. For fishing when the temperature is below -15, it is possible to recommend this pond.

Many people know that the Moscow river does not freeze in any frost. The biggest advantage when fishing in strong frost I think the lack of competition in whichever section of the river you come, will fish almost alone, especially on weekdays, so you would always be able to stand up at any point and there quietly to catch, and don’t get on with her spinning into the crowd. 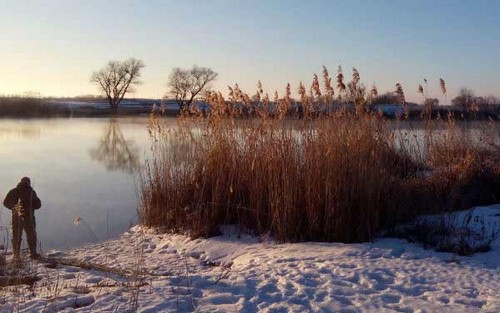 As far as the attendance of the Moscow river depends on the weather, can be clearly seen when crossing a road bridge Ryazan highway near Chulkova.

Thaw below on the right coast, especially in the day, you can see a lot of spinning — one was able to count 60 people, and it’s on site no longer than 1.5 km.

Moving the bridge if the air temperature is -25 again at the weekend — and see a maximum of three anglers. And this is the most popular and near from Moscow.

And downstream (catchability places for fishing on the Moscow river abound*) or you will not meet anyone, or a maximum of 12 anglers.

When the relative humidity of the air is high enough 15-degrees below zero to feel like -25. This is especially felt in the fog, when, as in milk, in the frosty air, and the rod and outerwear covered with frost. When the air is dry and the day is Sunny, you can safely catch and a 30 – degree frost. But the most unpleasant at a low temperature is the wind, which in the thaw much trouble does not deliver.

In the bitter cold all the way. The most vulnerable at catching yourself hands don’t help and gloves. Hands become literally “wooden” for a few minutes, so whenever possible, choose locations with a fair wind, so cold to move much easier.

Better to choose calm weather, even with high humidity — catching will be easier. If fishing in the thaw special requirements for the equipment not, in the bitter cold, there are several “negative nuances.”

How to choose a spinning reel for ice fishing 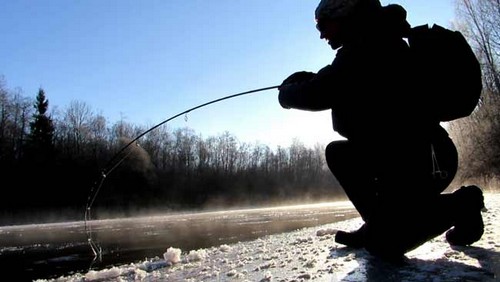 A spinning reel when fishing in the winter should be made of CFRP and hold a negative temperature, that is, when the loads in the bitter cold to survive. Crossing rings on the letterhead of the rod should be no more than seven. Ring opened (naturally, reasonably) diameter — for example, “Tulip” should be nothing more than 7-8 mm. the fact is that when fishing on the rings, especially the top 3-4, freezes in ice, and the smaller the ring size, the harder the fishing line to pass through it. And this has a negative impact primarily on the casting distance.

Even 6-7 years ago, I sprayed the rings with various means to defrost car locks, glass etc, but this was a little 2-3 casting procedure had to be repeated. The spraying of the rings took a lot of time. Easier to get rid of the frozen ring of ice, rinsing the upper part of the rod in the river water. Sometimes missing out on the 5-10 seconds that the ice has melted.

What kind of coil to put on winter spinning

She must be of good quality and therefore not cheap. With this coil you can be sure that at one point it jammed and will not happen something such, what fishing will have to stop. I know a few cases where coils of low quality is literally scattered when fishing in extremely cold, with such a benign yet there was none.

Due to water on the fishing line roller line bale subject to frosting. The ice, of course, necessary to remove and after a few casts to literally breathe on the roller, melting ice with warm steam.

After the coil is put on the rod, the reel seat (in most cases it is a metal) it is necessary to rewind elastic bandage -so the hand holding the rod, there will be less cold.

Mono or braid for winter spinning

Winter jig spinning fishing line, of course, braided, with the classic “pigtail”, not the cord in the braid, as it before fishing it is necessary to impregnate fat.

Some anglers use special sprays, ointments, etc., but it’s quite expensive, but the effect is the same. So, in my opinion, it is better to use mineral oil — cheap and cheerful.

In the bitter cold of the scaffold impregnation of paraffin oil missing no more than two hours of fishing, then on the “network” begin to form ice balls, which when casting can happen, “beard” or noose-tightening on the spool; moreover, in this case, the bait is not fly.

How to deal with it? There is a way! After speed posting before exhausting the bait, the rod tip should be lowered into the water. Turns out that fishing line, soaked with water, will not dwell in the air, and hence will not freeze. We only need to keep the bait from bumping into the “Tulip” otherwise paste out of the ring after hitting his sinker can fly.

What to catch in winter spinning: pike, Zander, perch

On the water it is better to bring a ready-made montages “leash — anchor — bait”, then don’t have to collect them on the pond. This is important because a hard frost only a couple of minutes to hands without gloves “zadereveneli” and stopped to listen to you.

Usually in the bitter cold predatory fish (pike, pike-perch, perch, burbot) caught at a depth of 3-4 meters. To examine the rocks makes no sense, because in such places in winter are usually caught Chub, but in the bitter cold, this fish did not show any interest in spinning baits. Predator happens to find in the coastal valleys, and in the vast pits. The chosen area does not need to be over, often fish kept in standing water. The day to day.

If you manage to find accumulated for the winter bream (Sedivy for him are expressed in the vibration of the rod tip on the pauses between podmocani coil, when the bait fish jumping on the backs), then such a place must be investigated carefully. Nearby must be present perch, remember the rule, “where is Belle, there is a predator”.

Predatory fish can be found in the snags, but in any case, at a decent depth. Small “runs” the place”, as a rule, in the cold do not work, and it makes no sense to spend precious time (winter daylight hours are short).

Basically, all promising pits on the Moscow river, avid anglers have long been known, so they regularly go astray. Suggest you find new points at which the fishing press is not so great. They likely catch will be richer.

The story about fishing in the winter on spinning

Last winter my friend found one such place — a small pit with a return flow near the coast. For two weeks we visited her five times, and the footprints in the snow it was evident that, except for us, nobody ever comes in here. On each fishing walleye bite, as scheduled began at 9 am and was finished by 11.30. Evening output was not always, but if there was, then 2 to 3 hours a day. During these 3-4 hours of active fishing for two, we usually caught up to 20 tails. Of course, there were gatherings, and a single bite is all as it should be fishing.

With regard to the nature of the day to determine the presence of a predator is hard, there are fish and silistix sites, and on rocky or clay (rigid) bottom.

What fish is caught in the bitter cold? 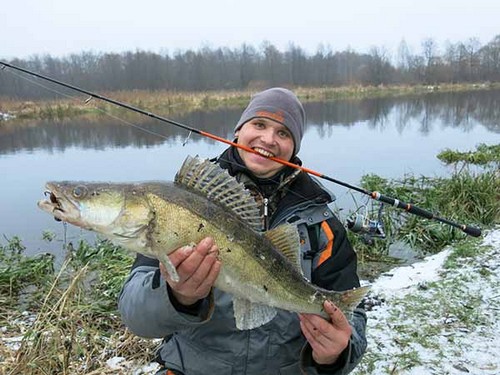 According to my observations, in the first place there is Sudak, it is the main object of hunting. His usual weight 300-600 grams, but there are also larger specimens, sometimes reaching 6 pound weight. 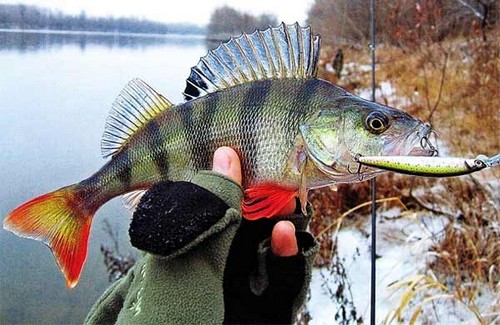 In the second place perch, you can sometimes find the whole flock, and sometimes it comes from one place interspersed with Zander. Mostly on jig the bait encroach specimens weighing 200-400 grams, sometimes it happens to catch and pound humpback, but I note that now on the Moscow river, they are uncommon, not that 4-5 years ago.

And what about the pike 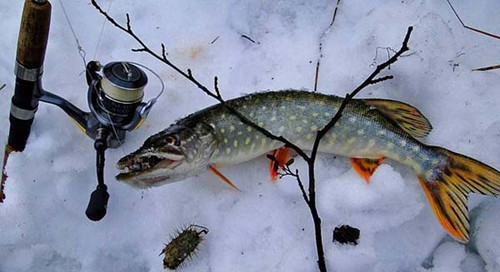 In third place — pike. In my whole practice fishing spinning winter in the frost on the predator (when one place had caught up to 5 tails) I fell only twice on the remaining fishing pike was a by-catch. The weight toothy is unpredictable, can bite the floor pound the instance, and you can really catch trophy fish weighing over 5 kg.

Predators of other species in the lower Moscow river, when the air temperature is below -15 is rarely caught.

Perhaps many will say: why me spinning in this cold? I’d rather go ice fishing and open water will catch in the thaw. But I’m sure there are those who will appreciate the extreme winter fishing on spinning in the bitter cold. You will have something to remember — I guarantee you that. No tail or scales dear friends anglers!