Boar hunting is much more dangerous than other types of hunting. But many hunters go to the boar alone or participate in driven hunts. The release of adrenaline, test your strength, stamina and skill allows the hunter to stay in shape.

It is important to remember that large (weight up to 200-300kg) the beast is very agile and active.

The hunting season for wild boar is different in different places. From August to January produce males and the young females hunting is allowed only from the beginning of September and the month of December. Hunt from the tower, from the approach, with dogs, or driven by way of hunting. Need a major caliber: 30-06 or 7, 62 х54R with paleovolcano bullet. 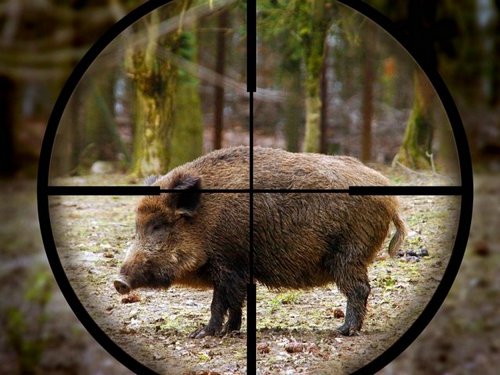 Hunting wild boar is popular among those who appreciate the risk, the excitement, the rivalry with the beast. The hunting of the boar will never be boring, even if You have to spend half the night in ambush, or on the tower. The anticipation of the meeting with a 200-pound seichem do not give sleep and relax.

To return home with the trophy, the hunter has to have a high shooting accuracy, stamina, keen eyesight and hearing. Add to the list of demands self-discipline, the ability to read the signs, accuracy and knowledge of the habits of the beast.

Without complying with the many conditions and lack necessary skills of hunting boar may be not only futile, but tragic. To hunt big game only by skilled craftsmen.

If You are a beginner hunter, start with the beast easier – hare, foxes, hoofed animals. Hunting smaller animals is not less interesting, and the level of danger is much lower.

How to hunt boar 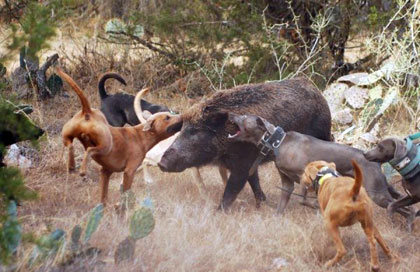 Hunting will be successful if You strictly follow the rules: 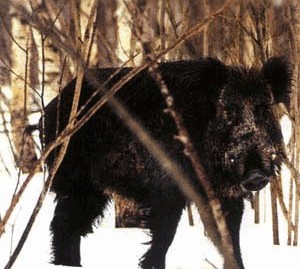 In the vastness of Russia to hunt wild boar in southern Siberia, the Urals, Transbaikalia, in the forests near Moscow, in Meshchersky area. In Belarus, where a large area of forests and wetlands, wild boar are very common.

In many countries, including Russia, has developed a network of game farms, where the number of wild boar population is regulated. From the end of the hunting season until the beginning of the new the number of individuals returns to the previous level. In some Jaeger farms it even increases. The beast will be enough for everyone!

Where to find boar? This beast prefers all types of forests: coniferous, deciduous forests, alder thickets. Oak trees attract wild boars acorns. Wetlands, bogs, and where a lot of dirt and maturation, also like the beast.

How to hunt boar alone? This method of mining only the most experienced and brave hunters. Boar hunting with approach full of risk.

So as not to expose his life to danger and to hunt successfully, listen to the advice of experienced hunters:

Looking for wild boar in the fields where they feed. Carefully picked to boar against the wind when he eats. You need to choose a location 20 to 30 metres, where the goal is clearly visible.

Sometimes the boar let hunter and closer, 10 m when heated in a ruined ant-hill. But not each hunter will dare to beat the beast from this distance. When hunting with the approach of an adrenaline rush is guaranteed.

For wild boar in the winter

In the winter, when the ground is covered with a dense snow cover, hunting boar harder. To track him down harder.

Do this: in the afternoon lure of the beast, and in the evening go hunting. For winter hunting for wild boar it is advisable to choose a place near the thickets of reeds, near shallow ponds. Often wild boars are placed with all his weight on the anthill, destroying it. So they bask.

Hunt wild pigs in winter from the tower. If a little snow, some extracted the boar from the approach at night. Use caution if You are in ambush in the reeds.

Stones or trees there, so the trained dog will come to the rescue if the boar will try to pounce on You.

For wild boar in autumn

Autumn is the best time for driven hunt. In the group of hunters, the number of which does not exceed 15 people, appointed those who will drive the beast and those who will act as shooters. The first noise and kicked the boar out of the shelter, and second you need accurate shot to hit the animal, which goes directly to them. Each hunter gets their own room.

Important: be careful not to shoot the beater instead of the boar.

Hunting boar in the tower, and ambush, which is placed on the “kupelka” around swampy areas or feeding grounds: in the fields, where there is harvest beets or potatoes, in oak and walnut groves, in old gardens.

How to hunt from the tower

This method of production boar for everyone. It the safest of all. Hunter is not in contact with the beast.

At the height of 4-6 meters equipped with “seat” of the boards. There’s a hunter waiting for the beast who will come to feed. The Rangers lure the beasts, and they quietly come, not knowing of the danger.

The hunter must take a position and hide. You can’t smoke, so that the boar didn’t smell human odor. Conduct this type of hunting at night. A good look at the beast in the dark will help laser flashlight designator. Need to aim accurately, because of the chance for a second shot will not – the boars leave.

Video where you can see how to hunt for wild boar from the tower. Pleasant viewing. 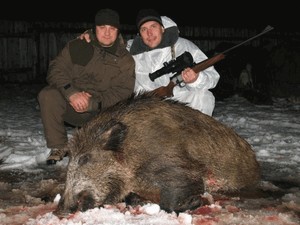 Night hunting requires the utmost concentration, great skill and confidence in their abilities. Hearing and smelling boar in the dark aggravated.

Boar hunting at night is in two ways: from an ambush and from the approach.

From the approach to hunt better in winter when the snow lies shallow, and more or less visible in the dark. Need to find a boar trails, places of feeding, mating for maturation.

Hunt down the beast on the sound when it feeds. Come to the side against the wind, when the wild boar eats. No more than 30 meters – this distance will ensure the accuracy of the shot.

Boar hunting from ambush in the night much easier and safer than with approach. Excitement, of course, less so as the beast and the hunter do not intersect.

The tower should sit very quietly, without movement, so as not to give herself away.

At a bait site, hosted by the huntsman, and the boar feels secure and not waiting to be attacked. To boar hunting was successful, you need to aim carefully, because in case of a miss chase wild boar will not be possible.

A good aid will have night vision devices. Modern laser flashlight for hunting allows the hunter a good look at the beast in the dark using a directed beam of green light. Him the beasts did not react and continue to feed. You only have to aim and the trophy is yours.

How to hunt wild boar? Before we get into the intricacies of the production of wild pigs, consider whether You are ready for this kind of hunting. If skills enough, study materials methods of production of the boar, see how-to videos, prepare equipment.

Start to hunt from the tower – so You learn to control yourself and learn about the habits of this cunning and cautious animal. Each method of hunting wild pigs has its own characteristics. Over time, You will realize that gives You a surge of adrenaline and crazy excitement.