The black grouse is a welcome and valuable trophy for any hunter. Krasnoborova large bird with blue-black plumage makes the experience of moments of excitement and excitement, which is accompanied by grouse hunting.

Extraction of valuable birds is done at different times of the year.

Hunting for grouse in the winter with the approach has some peculiarities. Fascinating, vysokosportivnaja hunting forces the hunter to be extremely attentive and careful.

At the same time, the required quick response in order to catch sight of the grouse, with a whir of wings “copycenter” departing from under the piles of snow.

The behavior of the black grouse in winter 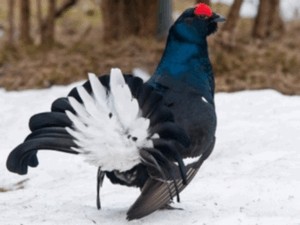 Grouse find in the vast Russian simply. He settles on the edge of a forest next to a swamp, or thickets of low shrubs. In open areas the holes do not occur. To hunt in the winter with the approach is necessary only in the forests. Often get the black grouse in the forests near Moscow, in the Tver and Smolensk regions, in southern Siberia.

In winter, black grouse gather in large flocks and searching for food. I must say that they do not tolerate severe frosts. If the snow fell, and temperatures in the -20S can kill birds. The main food in the winter – pine needles, juniper berries, birch catkins, buds and shoots, which freeze in the cold. To eat frozen food not very nice. Though the birds have adapted to extreme conditions and found a way to keep warm in winter and not go hungry.

They stuffed the craw is all that is fit to eat on the birches and literally “fall” from the tree into the thick snow, burrowing into him. The outer opening of the grouse sweeps of its tail. It turns out a kind of hole (hole), which after a time becomes warm.

In this “snow house” birds may be a day or so. Food will melt, be absorbed. By morning the hole already there droppings. A day of grouse go back on the feeding, punching a thick layer of snow.

Features of hunting on the hole

How to hunt for grouse in the hole? Winter hunting with the approach on the hole very interesting. Hunter can show their best skills and qualities.

The hunter must not only find a crowd of black cocks, but to be able to approach them to a distance shot, without scaring them with care of birds, which perfectly capture the voice of a man. It is forbidden to speak even in a whisper.

Special masking is not needed. The main protection of the black grouse – a good ear. 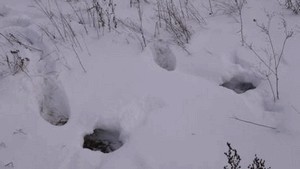 You need to go on the ski gently, a calm and measured pace.

How to understand what the grouse is in the hole? No tracks near there, after all, the bird dives into the snow from the tree and carefully masks the output. Take a look! If the snow is seen a small recess in the form of a trace from ski poles and no holes (outlet holes), so the grouse had not yet taken off from the shelter, it is inside!

The hunter must immediately freeze in place, wait a few minutes, when other birds rest. Slowly need to continue its approach to other cameras under the snow as long as Kosach not fly, raising snow dust.

Calm aim to get there for sure. Remember the fall of the cock, so long to look for it in deep snow.

Be sure to kill the wounded animal. While hunting you can get two or three grouse. More is not very realistic and not necessary. Next time get out on this dynamic and fascinating hunting for a new trophy.

Video where you can watch the hunt for black grouse in the winter with the approach of the holes. Pleasant viewing. 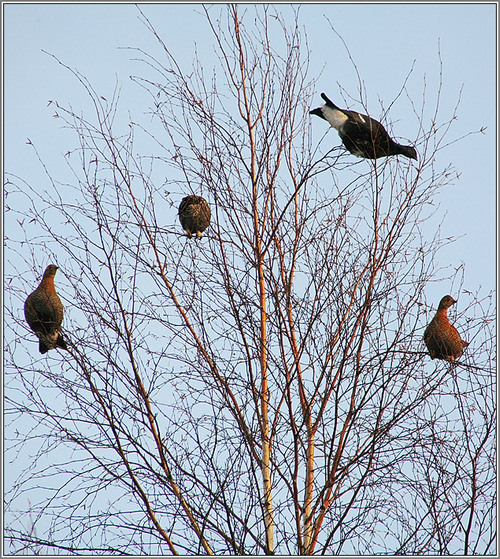 The best time for hunting approach to black grouse – freezing weather (not below -20C). The snow should be soft and loose. If you formed a crust, grouse will not be able to climb in a snow shelter and stay the night on the icy crust.

Closer to sunset, looking for grouse a pack, which sat on the branches and prepare to dive in the hole. Feed on grouse for about half an hour, sometimes longer. Binoculars birds can be seen over 500 metres.

You keep their attention and not get too close. They will stay overnight in same place or nearby, meters in 100.

To hunt grouse with the approach need to 10 o’clock in the morning while they are still sleeping peacefully and did not come out to feed.

The hens are located at the edges of the pack, and Kosachev (roosters) are located closer to the Central part of the cluster of birds. Hunter never knows where may suddenly fly grouse. The sudden rise of black grouse on the wing startles. It is important at this point not to lose concentration and look at who is in front of You is a female or Kosach.

Among hunters is considered shameful to beat the hen. Some admit that this sin of his youth. But, becoming more experienced and knowing the laws of nature, most self-respecting hunters refuse to shoot a female.

Even in winter many people think this occupation unworthy. 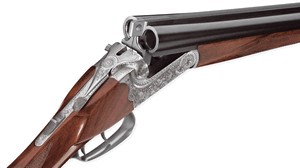 The most suitable variant of a conventional smoothbore shotgun. If You have a machine, the chances to get Kosach increase. Shotgun with barrels where you can drive bullets of different caliber, will facilitate the shooting during the melee, and in the far distance.

Try it for grouse hunting to use a rifle. Take a “melkashki” – a rifle chambered in a small caliber. Patron – 5.6 mm ring of ignition.

In Russia until recently, this type of weapon for sport hunting, including, and the black grouse, distributed prohibition. Now restrictions have been lifted.

In European countries and the Americas for hunting small game and game birds have long been used “melkashki”.

When winter hunting Kosach with the approach it is important that the shot was sharp. The high accuracy of the battle and a large size fraction for the production of grouse from the wells is not needed.

It is sufficient to use the fraction number from 6 to 5, or # 4. Large numbers, such as No. 3 should not be used. Precision aiming and timely response hunter grouse, which is pulled out from under the snow cover is much more important.

Fans of winter hunting with the approach of the noble grouse very much. The adrenaline, the opportunity to duel with cautious and smart bird attracting hunters of all ages. Man is left alone with Kosach. Each time the rivalry ends differently.

Sometimes the hen is so cleverly dodges the hunter after appearing from under the snow and quickly hides behind the barrels that aim is useless. Often the winner is the hunter, showing skill and accuracy. The unpredictability and the excitement to provide this kind of hunting in popularity.