With regret we have to admit that the spring hunting season 2018 has ended. Before you send it to the Treasury of hunting memory, I want to sum up the results of past hunts, and will not be superfluous to once again revive the memory of their most striking scenes.

Spring hunting this year I took place in two stages.

I was lucky enough to visit the capercaillie-current in the Moscow region.

It is gratifying to note that this hunt turned out memorable and successful, I managed to get full-grown grouse, the weight of which was four and a half pounds. 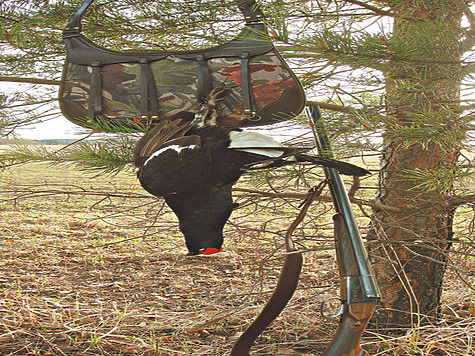 And at the end of April at the invitation of the friend of Alexander Fominykh I’m ten days went to Vologda to open the spring hunting season, enjoy the awakening of nature in the Russian North.

It should be noted that from the very first hours of stay in the Vologda land I start to drive. Making permits for the upcoming hunting, to the great joy, I became the owner of the mining license grouse.

Here about this hunt, I want to tell you, honourable friends-hunters!

…Overgrown with grass pretty impressive size field is almost directly adjacent to our village. At the perimeter on three sides it was surrounded by forest.

For many years each spring, this field serves as a traditional venue for the tournament grouse fights. Here you can see the miraculous view called current grouse.

Well, we early came to the village, before the opening of hunting we had three days. Therefore, do not delay the case under the rug, with the dawn I decided to proceed with the preparation of hunting on grouse current.

Given the fact that the field was littered with trampled after the winter grass, I decided to build a hut from local funds, and to put artificial blinds, store-bought specifically for hunting with a decoy duck and grouse on a Lek.

With a decoy I have hunted from it, the result was great. Drakes was not afraid of my shelter and sit on the water in the immediate vicinity. But if he liked the black grouse to be seen in practice.

Barely dawn broke, I, armed with binoculars, was already outside the village on the edge of the field. From different sides to me came current iridescent trills of Curlews and Lapwings plaintive squeak. And that’s grouse something is not audible yet.

High in the sky with “karakalem” flying invisible to me jamb geese. I twist my head around, straining his ears and, to his great joy, there are somewhere ahead of emerging grouse “bubbling”.

From these sounds easy a chill ran down his back, and his face lit up with a joyful smile. Well, thank God! So my dear! Did not disappoint!

The edge of the field, hiding behind separate trees and bushes, I slowly headed towards grouse “bubbling”. Dawn bolder and bolder joined in, and soon the visibility has already enabled me to begin to explore the field through binoculars. During another stop near courtines pines I finally saw through the binoculars of those who wanted to see.

At a considerable distance from the edge of the field, in a valley, before my eyes appeared tokovaya birds. Some of them, flickering white undertail, danced, occasionally flying from place to place, separate the roosters jumped up and down in place, flapping their wings, and the most brave Kosachev tried to sort it out in the battle with the enemy…

Admire the enchanting spectacle, I counted nine on the field takawashi cocks. Now I only have to define the installation location of the tent, which I was going to come on the field again, after the birds scatter with tokovischa for a while.

After lunch, my portable tent in the pouch behind his back, at the muddy edge of the field I headed towards tokovischa. Arriving at the place where the morning takawale linkvote handsome, I began to carefully study the area of the field, which in the morning are grouse tournaments.

The feathers on the grass (the consequences of the current fights) and litter determined, as I thought, the best current sites. Moving away from these places thirty steps, I put my collapsible shelter which, in my opinion, blending with withered grass on the field, not causing any danger.

That’s all! The preparatory work is done. The only thing left, tomorrow morning to go out and look through binoculars, what will be the reaction of the Kosach family in a tent.

To my great joy, I want to note that the morning out on the field and my observations of ecowise showed that grouse did not pay any attention to goodness knows where from undertaken “stizhok”.

I was particularly pleased with the moment when the grouse in the throes of passion ran straight to the tent, circled around him and ran away! Now remains the hardest part to wait for the opening of the spring hunting season!

…And then came the awaited day! The hands on the clock showed the hour of the night, and I already walked the edge of the field to his tent. The sky was clouded, but it was warm and quiet. “If only it wasn’t raining!” — this idea firmly stuck in my head.

Spring illuminating the street lamp, I finally reached my refuge — hut. I looked at my watch it was twenty minutes to two. The tent is too early to sit down, so decide to sit on a chair next to the shelter and listen to the night! Despite the darkness, not far from me so Curlews.

Silver streams pour their love serenades, tumbling over the field, noisy wings cut through the air Lapwings. High Lek-bleats tireless snipe. Somewhere on the edge of the field alarmed shrieked at the puddle duck.

Soon my ears caught the distinctive sounds that can be sent by the syllables “bi-bi-PE-PE-PE.” Is this… Very similar… Listening to that again a series of specific sounds, I finally realized that near my tent was tarawali grouse!

Two current (grouse and biliny) peacefully coexisted with each other. And, characteristically, this neighborhood does not interfere with the spring birds to indulge in amorous pleasures!

Meanwhile, the East began to lighten, soon on the current needs of the grouse. Climb into the tent, conveniently arranged it on a chair. Charge the gun “three” and “five”, put him on his knees and plunge into exciting waiting for the arrival of the current krasnoborovii Kosachev.

It took less than ten minutes left of the hut he heard suitase-Sizzling “Chu-u-FSH-Shh.” By surprise, I flinched, but his head flashed: “Start!” Although the fire was still far away, arm themselves somehow squeezed the gun tighter.

After some time a predatory hiss again, but answering the call was not followed. Suddenly from behind the hut came the sound dead land birds, and almost immediately there came a passionate coficine.

And soon, in front of the hut, to the left and right of it, cuticule, muttering, flapped arrived at the current grouse, but the visibility is still not allowed to observe birds.
Soon they were seen moving in different directions white spots-the undertail.

Closer to the morning current grouse, like the fire blazed stronger and stronger. And that’s already become visible Krasnopolye handsome, who, spreading the tails of the lyre and wings, with outstretched necks bloated moving around the field.

Looked out from the forest the sun gave a new impetus cocowalk birds. And soon with “babakhanian” in the center of the current dropped three hens. Some young grouse that were in accordance with “table of ranks” on the edge tokovischa, rushed to flew greyish girlfriends, but the old cocks from the centre of the current forced them to return to the starting position.

Notice how for a good shot to the hut ran a young krasnoborovii boyfriend that could not remain unnoticed by the old cock-grouse. Feeling the superiority of experience before youth, young Kosach ran off to the side, but then, changing his mind, obviously, decided to return to fight the opponent.

The sun began to break away from the tops of the distant wood, the time has come to put an end to the hunt. Removing the gun from the fuse, I stuck in the hole, the gun barrel and position the bug under the bend of the wing of a young grouse, never dared to fight with the old Kosach, gently pulled the trigger…

One Comment on “Coccinia dances: about your spring grouse”