18 July 1875 at sunrise we first went boating on the Zambezi. On a fragile boat with a width of 45-50 centimeters, hollowed from a trunk, the edges of which barely rose above the water. The water was blue-black, confirming that the river is very deep; in front of us and behind us dark blue ribbon floated beautiful Islands, lush green of different shades. To the right stood a six-foot wall a great big bushy fern, which in some places covered the area of several miles. Through its thickets are visible the so-called caves, which are paths of hippos. 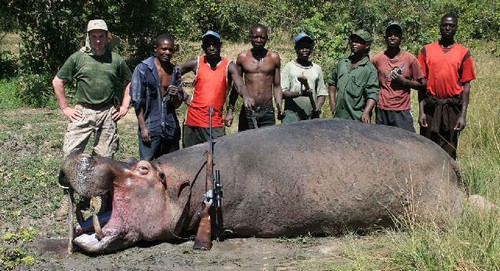 Many beautiful plants in the Zambezi hover over the reeds, delicately decorating a dark wall noisy fern forests. Behind him is marshy, rushy island, which is surrounded by fantastic Bush of papyrus, forming a semblance of a pointed collar. Beautiful beauty bushes, stalks, washed with water, and “bow” your canopy and trembling, the other from the stronger currents sway from side to side. On a small vacant areas in the most fabulous papyrus suddenly flashes of white, red, gray or black, and before we have time to stare, trying to figure out what it could be, suddenly takes off grey or purple Heron.

In another place visible to the group of small herons, many birds stalking about, others sitting on the stems of papyrus, lie in wait for fish. If you turn on river sleeve, where the locals seldom look, you will instantly surround the flocks of wild geese and ducks, and the sand mass and storks and seagulls Razin. Attention travelers are attracted by a long cry river eagles usually sit in pairs on the trees or on the shore, where it is higher. Generally on the banks of the great river constantly appear new and lovely animals. We like the journey and the exciting life on the beach, and a fern wall, filled with bird chatter, and papierosowy a thicket.

There is nothing more picturesque than the team on the boat: the dark figures barotse (Lozi) cut its long oars fast wave, despite the heavy load, and their aprons of tanned skin, tied white and red muslin, fluttering in the wind. The man on the nose directs the boat. Over and over again rowers with greater voltage dipped their oars into the water, accompanying every second stroke singing. Immediately behind the first rower sits traveler, followed by usually three or four, sometimes even eleven rowers who row standing up. The long boats — seven.

It seems to me that the width of the river three hundred metres; where the numerous Islands, it spreads, and the width reaches even thousands of meters. In many places the coast washed away and are dropped directly into the river. Of canes, three feet from the shore, two meters deep, where on the shore grow the rushes, you have to walk seven meters to find such depth. We continued to move close to the shoreline to avoid hippos that day lying on the middle of the river and only sometimes float to the surface.

When turbulent flow in many places hindered us crossing the river, the rowers, straining, wanted to pass this portion of the route as soon as possible. At some point, driven by the fast currents and moving from the left Bank to the right, where was an island, overgrown with papyrus, the rowers stopped suddenly, and one of them standing closer, whispered, “Cuba”. I did not remain long in perplexity. My neighbor was pointing to a spot about two hundred paces from us, where it seemed little short stump from which beat two jets of water immediately behind him appeared the second. It was the head of a hippopotamus.

As soon as the dark mass disappeared under the water, we paddled cautiously and slowly, and when it turned out the place where animals surfaced, he stopped. Blockley and I prepared for the shot. First we saw the heads of two cubs, then a large head of the male, immediately behind him, stuck the muzzle of the female. Of the eight shots we made for two animals, two bullets hit the adult Hippo’s ear. The rowers claimed that the animal mortally wounded. And it was true. I believe all South African mammals for an unarmed man Hippo is the most dangerous animal. He humbles himself only with close objects that surround it.

Everything that seems to him a stranger, he refers both to the enemy and violating his peace; when the reed on the trails on the way to the water or after the waterhole he finds whether it be ox, horse, porcupine, box or tree stump, a blanket, blocking the way, or even a man, he immediately rushes to the enemy to clear the way. If the counter goes away and hides in the bushes, Behemoth calmly goes his way, forgetting about who or what he a moment ago saw.

The Behemoth will not spare an unarmed man, while the man with a lion, Buffalo and even leopard can often end without incident, if he doesn’t piss off the animal. If one of several Hippo surfaced in the river, is wounded, the rest is less likely to appear on its surface, and if the wound was fatal, after an hour of death thick-skinned Hulk POPs up and will be given to the waves. Barotse can easily cope with a corpse. A stone tied to a rope from the grass, they move through the body of the dead Hippo, its other end held in the hand and slowly start to pull the giant out of the river.

Barotse are passionate hunters of the hippopotamus; especially the ones that hunt the peoples living on the banks of the Zambezi. Some have great dexterity. The leaders of the barotse moved them from the upper reaches of the Zambezi, adding in the small villages along the river to provide leaders with fresh and dried fish and meat Behemoth. These people called the smallest of their boats mokoro or Cuba (boat Hippo). They barely stand one person, and manage them quite difficult, but they move extremely fast.

Hunters the hippos are very large Asagami with a long handle, which is not a small heavier than normal copies, since their arm is made of soft wood, and simple anchor. When I then arrived in Sesek, told me a terrible story that happened in 1874 near the city. Some masubia floating down the river, saw in the sand the sleeping Behemoth. Believing that he will kill people silently swam up to the animal as close as possible. Out of the boat, he went to the Hippo and put him a spear under the shoulder blade. But the point wounded the giant slightly, having only the ribs.

Awakened Behemoth stood up and turned so quickly that the hunter not managed to jump away and hide. The Behemoth rushed at him, but masubia fell to the ground, hoping to hide from the eyes of the animal. Unfortunately, hunter did it fast enough, so the deception failed. When mashpia, defending himself, stretched out his right hand, enraged the giant grabbed her with his sharp teeth bite. Involuntarily, mashpia stretched out his left hand, the animal was gnawing at her fully. Fishermen, sailing by, found mutilated fellow — he was dying.