Hunting for grouse trap: a variety of Arsenal earner

In mind some of the stereotypes of the hunter is a person who necessarily must be the gun. However, as practice shows, the presence of firearms creates a huge number of different problems. They can be associated with the storage and registration of weapons, and can contact and use of a gun while hunting. Despite all the opinion, more and more often-practiced hunting with cunning and not very devices.

That is why, today, we will discuss their use when hunting. Be sure to talk about how you can increase productivity as well as how to catch a grouse without a proven gun!

Before you can understand what hunting for grouse trap, it is important to learn more about his potential victim. This is a fairly large bird that belongs to the pheasant family and the order galliformes. The name of this bird derives from the fact that in the mating season, males significantly reduce their vigilance and sensitivity.

The bird loves to stay in the volume of coniferous and mixed forests, rarely in deciduous equipping. Never takes long flights, and each flight is accompanied by noise. Day on earth, and at night the bird climbs on the trees.
Now, you can discuss how is the hunt for these birds.

In General, the hunting methods of fishing are rarely used on an industrial scale. To the production a lot, manufacturers put a variety of samolovama, traps, and loops. Most of them crushes the bird “aadnoy” part.

An important feature of this type is to install multiple trapping loops. Hunting for grouse with traps is due to the fact that the hunter can long wait for production, if harvested only one smelovka. Hunting with a gun, the person he seeks out the victim, waits for the moment and kills the bird. In the case of hunting without a gun, people should just set the loop and periodically checking the prepared samolovama.

The need to put them on the trails, where grouse, this significantly increases the chance of large prey.
After all the traps and samolovama installed, from the hunter, it is expected that he will pick up random loot.

Experienced hunters as samolovama use Slovtsov-trap. The upper part of slupca is two logs or a large Board. Walking his trail, feathered touches “a pointer” and the top falls on him or the Board, or two connected logs. Of course, the prey is immediately killed.

Another secret is to lure the birds to the place where the fishing spot. Using stakes or small branches, the hunter sends the bird, so that probably hurt “a pointer”. The main rule installation of samolovama is to identify the location of food or drink. Some very patient hunters, even the lure of the grouse, leaving the food. To achieve the desired effect, it takes time to “bait” has become popular among potential victims of human.

In the picture below You can see the device traps slupca for grouse. Made it from scrap materials, with an axe or knife and coil of rope. The device traps a very simple and primitive, its construction will not take You much time. 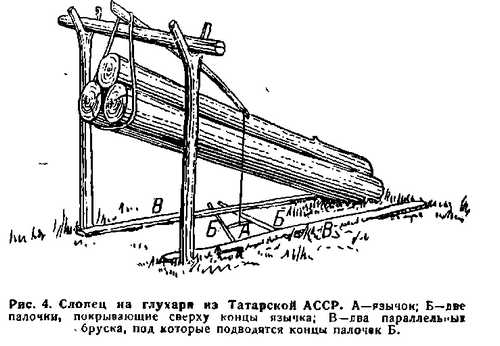 The use of special hinges, as the trap is considered the oldest and best known method of production of the feathered. Hunting for grouse loops can be implemented using horizontal and vertical loops. As soon as the bird hits it, the site is very much contracted, and to weaken it can only be a hunter, with his own hands.

Loop for hunting are made of thin wire, a thickness of not more than 1 mm.
Loop, which is made all the rules, can safely withstand 30 pounds. Most often they are mounted on the trails of grouse so that they slightly touch the surface of the earth. “The stick” for loops is a tree or a small stick. Read the device: 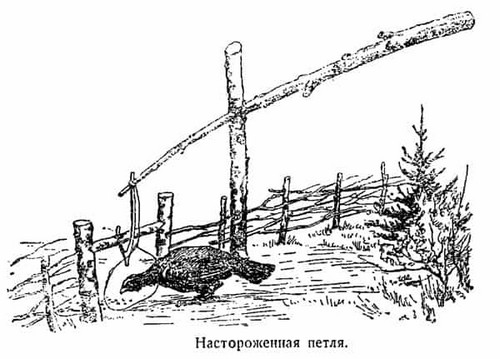 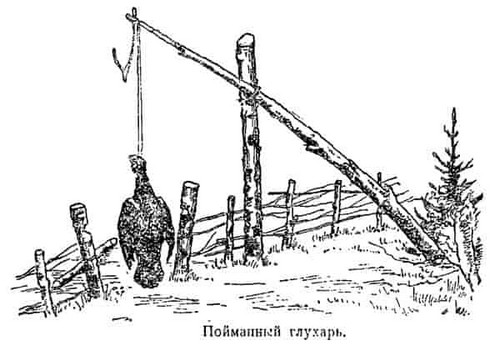 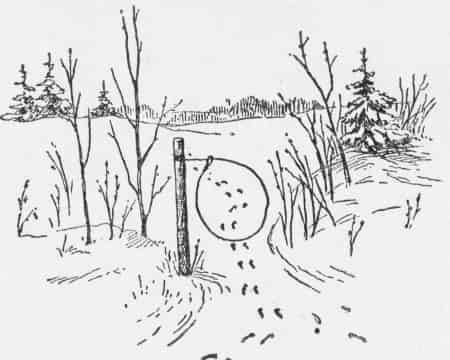 View our video, which is narrated and shown visually, in the woods, how to make a loop on the capercaillie. After watching it, many questions will disappear by themselves. It doesn’t take a lot of time and in return You will receive useful knowledge and skills.

Of course, the weapon was, is and will be popular among hunters. However, it is undeniable that hunting for grouse with traps is also gaining popularity and many miners decide to use this method.

2 Comments on “Hunting for grouse trap”