The largest bird, which is allowed to hunt in our country is grouse. The adult may be of a sufficiently large size and weight (the male is from 3 to 6 pounds, the female up to 3 kilograms). Capercaillie ordinary can be seen almost on the whole territory of Russia, where there are forests in the Urals, in Western Siberia, and Central and Western European part.

Capercaillie is found in the deciduous forests of Eastern Siberia. It is less of a wood-grouse ordinary, has a long tail and black beak. Sometimes forms with an ordinary grouse hybrids. Methods of hunting both birds are no different.

The grouse loves to settle in pine and cedar forests, can live in mixed forests, which must grow pine trees, since in winter, these birds feed only needles. 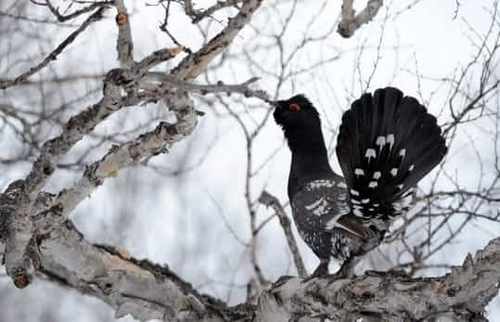 Hunting for grouse in the fall has a wide variety of ways, each of which can be used by the hunter to increase the chances of success.

The fall is grow young grouse, who are easy prey because they do not have yet experience a high degree of caution.

To get close to such individuals is not much effort, because they behave much easier than old grouse. Noises and sounds are not so afraid of them as adults.

This does not mean that hunting for grouse in the fall should be ugly and not be afraid to make noise, because capercaillie in the first place is a wild bird that tries to hide from enemies and potential danger.

The presence of proper masking, rapid fire skills, ability silent approach to the bird and cartridges with a heap and a sharp fight will come in handy on this hunt.

The favorite habitat of this bird are pine and cedar forests. In the mixed forests of wood-grouse abound, provided that it has coniferous trees because in winter they eat only pine needles. If You want to quickly find this bird, especially in unfamiliar woods, looking for raw and remote places.

The essence of the technology lies in the instinctive behavior of grouse in the autumn. If the forest is ripe or ripe berries, you can look in these places exactly where their place of feeding.

Later, the colder it becomes, the more the wood begins to climb the aspen and larch. They remain there for as long as the aspen leaves turn red, and the larch will not fall past the needle.

For example the difference between the methods of hunting, larch or aspen no, the only difference is that larch wood climb later, when the needles becomes soft, nutritious and hearty.

So, You have found the aspen or coniferous trees, the next task is to carefully inspect the ground under the trees the goal is to find signs of capercaillie habitat. Signs of habitat will serve the fallen pine needles, small size, cut off the twigs, and litter.

All of this suggests that there was eating our object of hunting. Of recent snow (the first) can help the hunter, it shows a lot.

If You heard a large bird sat on a tree, then it is from You on distance of 400 m, and also the clacking beak heard approximately 150 m. All this will allow find their way around the sounds.

By the way, the hunting season for grouse starts in late August or in September, it all depends on Your region, which sets its own norms and terms. For example, on Yamal, in Yakutia and Irkutsk region you can hunt from August 16.

In Karelia, the Vologda region, the Krasnoyarsk territory, in Pomerania, and Kamchatka, and also in the Ryazan region season starts the 3rd Saturday of August. In the Altai it is possible to hunt from August 30.

How is hunting for grouse in the fall?

If in summer, capercaillie in most cases, it feeds on berries, in autumn he moved to aspen and larch for as long as aspen turns red and will not fall off the leaves.

With the arrival of cold weather and frost, the first snow days of winter, the grouse are in a coniferous forest, where they feed on the needles. This time of year hunting is carried out already in other places.

Since this bird eats often coarse grain, for the best digestion of the stones she needs that she finds along the rivers, forest or Railways and in quarries.

Thus, in the fall for grouse you need to go into the forest, where it grows in aspen and larch. In addition, the marshland and the dense thickets with the presence of moss are a common habitat for grouse.

Remember that grouse is sedentary lifestyle, so it will not be too far from where he was born.

Hunting for grouse in the fall with a dog

The use of hunting dogs on the hunt is having a great support move, as it can help you not only find the grouse in the hunting grounds, but also to find wounded game, which sometimes.

If You hunt grouse in the early fall, it is possible to use setter dog, which usually smell searches for broods of grouse.

In the beginning all the birds run away from the dog, but after a while, lay low. COP makes a special stand, the hunter, meanwhile, defines the place where you can fly grouse, and tells the dog to raise a bird on the wing.

At flying birds made the shots. Must see the place where the departed coach to re-direct the dog.

Closer to the middle of autumn, many hunters begin to take a hunting Spaniel, who by the nature of the work differs from the setter.

This breed is a hunting dog does not stand, therefore you need to constantly monitor his behavior to catch to shoot rising birds.

Here it is necessary to keep up with active Spaniel, and to follow him. If it is good to train your dog, you can ensure that she will pass the grouse and raise them toward the hunter.

Husky is also actively used while hunting for grouse. The style of her work is to find grouse and drive it into a tree, and then a quiet and rare barking to tell the hunter that the bird was found.

At this point, hunter tries to get closer and make a good shot. It is important that the husky didn’t bark often and loudly, so you can frighten the grouse long before the approach of the hunter.

Hunting for grouse in the fall with the approach

From its name it becomes clear that hunting is to approach grouse at a distance, which allows you to make a good shot.

The hunter needs to dress in camouflage clothing that will be similar to the environment, because the wood grouse good vision.

It is better to choose a cloudy weather, when the leaves in the forest rustle, which will facilitate the approach to the bird. You need to go to a place where there’s aspen and larch. If there is wind, it must blow on the hunter, not away from him.

As a rule, in the pine forest there are small pockets of aspen and larch, which are located on the southern slopes.

The presence or absence of capercaillie in these areas can be identified by the dried needles that are lying on the ground. In addition, in the process of greasing the birds leave the small branches and leave droppings under the tree, where they feed.

When a grouse takes off on a tree, the hassle of its wings audible for several hundred meters, and the crack during tearing of the leaves is heard for a couple of hundred meters.

Thus, the hunter will be able to determine where the grouse are in the moment and then start to approach them.

If a tree sit a few grouse to shoot those below, in order not to frighten others. The aim should be in the side under the wing shot, No. 2 or No. 1.

Of weapons it is recommended to use 12 gauge. If you use the semi-automatic, preferably not weighing more than 3.3 kg.

While hunting for grouse in autumn is used in other ways. For example, hunting with stuffed animals, when the tree is planted from three to five stuffed grouse, pitch a tent and await the arrival.

Some hunters drove up to the grouse on the car and already it fired, but it is an illegal hunting method. These moments occur when the grouse are looking for gravel along the roads.

What shotgun to use when hunting grouse. Select the number of fractions and sample. 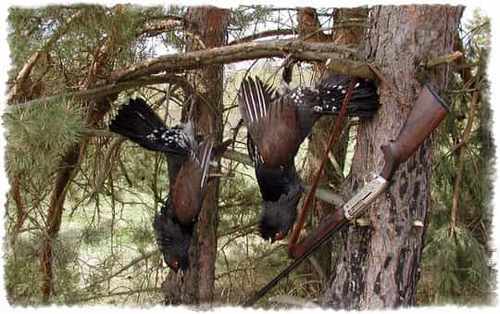 It should be noted immediately that the shotgun 12 caliber in a hunting rather than a machine, and here’s why:

First, very often we get into serious wilderness, and the failure of one trigger will not allow the hunter to remain without weapons in stock, You will have the second barrel.

Second, double-barreled shotgun gives you the ability to charge different cartridges, it may be done as for shooting at different distances (up to 35m and beyond), and for the safety of the hunter for protection from larger predators in remote places.

Thirdly, shotgun machine are better protected from contact with various debris which often enters the weapon during sea hunting, it can be twigs, pieces of leaves, sticks and more.

We advise You to seal the outlet of the trunk 1 layer of tape. It will not get debris in the barrels, and will not affect the quality of the shot. Of course, before the shot does not need to be removed, nothing wrong with that.

Take for a maximum range of 50m, very often a hunter just can’t get close enough, not cool and how to not lead. In this case, it uses cartridges “Magnum” with the shot № 0 and a charge of gunpowder in 40gr.

If it does get closer than 50 meters is not possible, I advise you to shoot to the side of the birds, because the area of the silhouette of capercaillie will be the maximum. At distances up to 35m advised to use the cartridges of the company, “fetter” 12 gauge shot weight 32 gr.

Best to aim and hit it in the side part of the bird, under the wing, or shoot a bird in front. Shoot the grouse in the back not really worth it, in this case, it’s a very real possibility not to kill him on the spot, podryw, after which the bird will fly away to die, and You never will find.

The main rule: necessarily targeting any weapons and ammo that You decided to use.

Fall hunting for grouse will appeal to many hunters. Some call it the most interesting and exciting, while others appreciate the opportunity to enjoy your time to relax and catch your trophy.

Here are some important tips for the hunter who decided to participate in this exciting hunt. Perhaps they will help You and thereby reduce the number of errors!