Winter hunting for grouse is a very exciting activity that ignites the hunter the excitement. But at the same time very difficult as the grouse – bird cautious and shy. Not much lucky to get her trophies.

But there are a few secrets that will help the hunter to come home empty-handed and boast coveted. By the way the hunt for capercaillie and black grouse in the winter are very similar. Birds related and both can hunt in the current or in the holes.

Like any hunting, hunting for grouse should begin with the study of a hunter his victim. Before you start hunting, you need to know all the characteristics of birds, including height, weight, habits and so on. To look for the bird need in the coniferous forests. This is the main place of feeding, and range of its existence. In winter, males and females form separate from other flocks. Therefore, if a hunter wants a trophy and a chicken and Cockerel, he’ll have to work on tracking down the two packs.

At the beginning of winter, when the snow on the ground is minimal, grouse roost on the tops of the pine trees. There they feel safe. When the ground is covered with thick layer of snow and severe frosts occur, grouse change their place to sleep on the snow hole.

Birds can survive for more than three snow days in a period of strong frosts. During this time, the snow conceals the tracks of grouse and find it almost impossible. Sneak up to the bird to be very careful. Despite its name, it has an excellent hearing, and hearing the slightest rustle, hurry to leave is not a safe place.

Weather is one of the key values for the overall outcome of the hunt. To go on a bird should only be on certain days when the air temperature is not less than 20 degrees with a minus sign. This weather is good for hunters, because the grouse, as a rule, hearty eats before frost, and buries itself in the hole. He’s not leaving them for a few days.

If the temperature does not exceed 15 degrees with a minus sign, the grouse will come out from the hole for feeding. If the temperature is nearing zero, the bird will behave in the usual way, all day, with feeding and sleeping in the treetops.

Weapons for hunting grouse can be almost anything. Is considered a classic shotgun. But individual tastes are welcome. The number of shot should you choose not large, in the range of 1-2.

By its nature, the grouse is a very cautious bird and at the first sign of danger or other sound trying to escape.

Thus, not everyone is able even to approach to a distance shot. To produce such a large bird in winter in several ways.

Some hunters do an excellent job alone and spend the hunting of capercaillie in winter is very successful, but others can not conceive of hunting without a hunting dog.

Faithful four-legged friend will always help to get the wounded animal, which is hunting like that happens often, novice hunters.

In most cases, the young hunters can’t come close to the grouse, so try to shoot him at long range, and it is not possible to get him with one shot.

How is hunting for grouse in the winter?

This kind of hunting can be divided into two periods. In the winter when there’s no snow and the temperature is around zero, and sometimes even a little less, grouse mostly sleeps and is on the tops of the pine trees.

With the onset of the great frosts and heavy snowfalls, the situation changes radically. A bird descends from the trees and burrows in the snow, where there can be a few days.

If You are about to hunt in a period of weak frosts and lack of snow, then look for the capercaillie need in crowns of tall conifers.

In such places the bird tries to hide from danger, so to see it was not so easy. Approach it to the distance of the shot is also difficult.

Usually in the winter hunt has adults who react to any noise and flies from the tree. Shoot at the flying bird must at the first opportunity, but not worth firing at prohibitive distances.

Some hunters prefer using rifled weapons, which allows you to fire at a distance of 100-150 meters, which makes it a little easier hunter.

Hunt grouse in the hole

The air temperature from -15 to -25 degrees with the presence of deep snow forces the grouse to sleep in holes in the snow. In these holes the bird may spend up to three days without going.

A particular challenge for the hunter is the task to find places there to get it. By nature the representative of the animal world lead a sedentary life.

If You have managed to discover the holes in which were grouse, then somewhere nearby we should find, as at this time he doesn’t like to go far.

As a rule, the hole for the night the wood-grouse does near the place of feeding, so the presence of fresh footprints in the snow indicate a high probability of being in the radius of 100-150 meters of the hole in the snow. 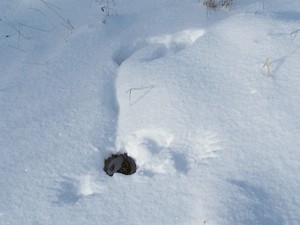 For the hunter it is very important to determine the presence of grouse in the hole. If the snow is only one entrance, it is there. When the snow is the entrance and exit, the birds are not there.

Approach the hole must be very careful not to frighten the grouse too far. It is sometimes possible to get very close so that some hunters chasing grouse with his hands.

Shoot, as a rule, fraction №1,2. This fraction is enough to successfully hit a grouse with optimum distance.

The most difficult moments in this kind of hunting is searching the place of roosting birds. As a rule, the screws should make holes near the place where they eat. But this is not always the case. And hunt down the grouse can be difficult. The bird prefers to lead a settled way of life. Therefore, pre-hunt down the sleeping place of birds, you can safely go on the hunt.

Sneak up to the camp very carefully, the birds can Wake up from the smallest rustle. When the hunter found a place to stay, you must make sure that the hole is fresh and grouse is really there. This can be done in appearance. First, around the hole there are the characteristic traces of grouse. If the hole hunter sees only one hole, so the grouse is on the inside. If around the hole multiple holes, so the birds are not there. She was there, but left the camp, creating a second hole.

If a hole was successful, before the hunter has a choice. You can flush out the grouse, the bird will begin to climb out of the hole, allowing the hunter to aim and shoot. In recent times it has become very popular, hunting grouse with his bare hands. The hunter can make noises, in the immediate vicinity of the wells.

A startled grouse will slowly start to get out from under the snow, where it awaits the hunter. It is worth noting that grouse are fairly large and strong bird, should make considerable efforts to cope with it himself.

The essence of this type of hunting is to locate a flock of grouse, sneak up to her and make an accurate shot. But all this sounds easy only in theory. In fact, this is the most difficult form of hunting bird.

His difficulty lies in finding a flock of grouse. This bird usually lives a sedentary life. That is, finding a suitable place for feeding, she will be there for some time. Moreover, the grouse will spend the night near this place. But to find a place for feeding is not so simple. After all, in a pine forest almost every meadow can be those dens, and comb will have a considerable share of the forest.

Finding the pack is too early to celebrate. Further — it is even more difficult. After all, the grouse is a wild bird. She sits on the very top of the pine and has a great view of the area. The problem is that grouse sees the hunter much earlier than him. So the bird has time during the fly away, leaving the hunter without a trophy.

Moreover, the dense branches of the spruce will good hide the bird, and will get pretty hard.

Into the hands of the hunter may play windy weather. In this weather the grouse is difficult to determine which side is heard a rustle, and he is in some sense disarmed. Pick up the pack, you must stop at a distance of 100-150 meters. No need to rush to make a shot. A hunter should know that he has only one chance to make the right shot. Hearing the sound of the gun, the whole flock will disappear momentarily. To get you have very aptly, because the grouse is a bird, very strong on the wound. Even with a mortal wound, grouse can fly at a distance.

It is also worth noting that the grouse is a heavy bird. Resulting in her hard enough to rise quickly in the air. This feature gives the hunter more chances for a successful hunt. 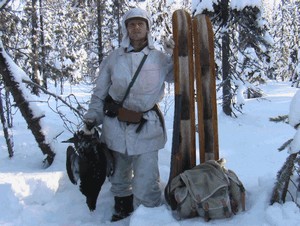 The breeding season for the grouse starts much earlier than other birds. Therefore, the end of winter is a time when you can hunt on the currents. The middle and the end of February for this approach, as well as possible. The first echoes the spring will force the bird to obey the call of nature and go to places mating. Ethe place the hunter can just enough to find. In the meadow are traces of a large pack, with clearly visible traces of wings of males that performed courtship dance.

Grouse may choose a completely unpredictable place for mating, it can also be different. But the hunter had one significant clue – the bird usually comes to pairing at the same time. That is, knowing where mating took place a few years ago, you can safely go there.

You can also hear the grouse the characteristic sound. Males emit something similar to singing, thus attracting females. So find them is not difficult. If the bird feels safe, she can displaying not only the treetops but also at ground. This is a great chance to make some good shots.

During mating the males attention is paid only to the female, this moment must take advantage of the hunter. Finding the pack, the hunter does not need to rush to approach her immediately. You need to wait about half an hour to all the males started to sing and was involved in the process of mating. While waiting, the hunter must be very quiet, do not smoke and even talk.

After waiting for the right moment to make a shot, after a good sighting. Fascinated by the process pack may not immediately noticewhat was happening, and it will give time to the hunter for the second shot. It is worth noting that the strong wind, snowfall or rain will interfere with the grouse begin courtship. Birds are anticipating great weather. Therefore, choose the hunting day you need based on weather conditions.