Before talking about how to hunt the partridge, it would be great to further explore this game. Grouse is a wonderful bird, which is part of the pheasant family and the order galliformes. Interestingly, the habits and manners resemble what is usually behaving chicken that allows people to call her a “field chicken”.

In appearance and size, it is a very small bird. Is a bird in the grass or bushes, as it is ground. A distinctive feature is its fast running, successful maneuvering among the plants that are making life difficult for hunters. 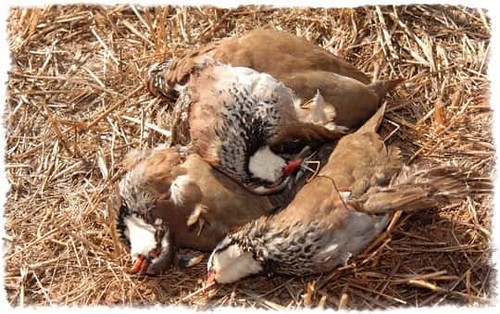 Although grouse can fly, it rarely rises into the sky, making it only when he felt a great danger or when he wishes to quickly navigate to the site feed. Partridge hunt in the fall is most often a dog setter, and if not her, then used a method of approach. We are happy to present some features of one and the other hunting.

The location of partridge

One of the varieties of this bird is most common in steppe areas (fields and meadows). Partridge loves the wheat fields, fields of potatoes and buckwheat, as well as lush meadows, berry glades and dry swamps. The main food is plant food, seeds, berries and roots of grasses.

In autumn and winter the birds gather in flocks and remain in the meadows and fields.

Now let’s talk about what a partridge hunt in the fall with a dog.
The hunter and the dog will be slightly easier time greasing the birds, because it very much goes to the field, leaving behind their traces. This hunt was productive, the hunter it is important to know exactly where it dwells a bird. Otherwise, the hunter will just roam the field, without any result.

It begins with the fact that a pointing dog finds the pack and scares her, then with the noise emitted at a distance of 200 metres and again sits on the ground. This allows the hunter to see where the bird landed.

It is important to be very careful, as some partridges are very tricky. They are, after declining not sit on the ground and change direction and move a little more on the field and then finally fall to the ground.

Hunting with the approach

Now, we will discuss the following: hunting partridges in the autumn winter with the approach. Likewise, a hunter must know where the partridge dwells, and where birds place of internship. Optimal number of hunters – from 3 to 4.

Participating hunters stand in a line, driving the grouse to the nearest forest belt. The bird observes the hunters and is lifted, allowing the hunters to open fire. In General, the behavior of birds is no different from how it behaves during a hunt with the dog.

Interestingly, the game is perfectly masked and the wounded partridge is very difficult to find in the field. Better than others with this task will manage the dog.

Some hunters decide to use a decoy to mimic the sound of different animals and birds. In General, hunting for partridge in the fall with semolina is, if I may say so, “dark horse”. Thanks to make sounds, it’s easy to lure the birds, hiding from the hunter.

In most cases, the hunter tries to mimic the male partridge. The sound of his voice is very much like a hiss. Published these sounds in about the same and rather short periods of time.
It is important to note that the bird always react to the sound of semolina.

Guns on a partridge

Partridge hunt in the summer, fall and winter will be successful when choosing the right weapon. The gun must be comfortable, slaughter and tested.

Also, the hunter should not forget about the gear, it depends on how long he will remain unnoticed by the bird.

These are nuances that we wanted to tell You to organize Your hunt for quail! I hope that the recommendations, advice and practical assistance will be useful and You will be able to catch a sufficient number of game. Best of luck to You in this difficult matter, which is rewarded with loot. We are sure that You certainly will succeed!