Hunting Fox at night in the winter

Every experienced hunter knows that hunting a Fox is hard enough. In common foxes are called cheats and gossips not just because this is an extremely cautious animal, characterized by amazing ingenuity.

In General, hunting Fox at night can be done from the approach to the bait and with dogs. Today let’s try to briefly discuss all of these methods, and then sum up the results and decide how to catch a red sly Fox. 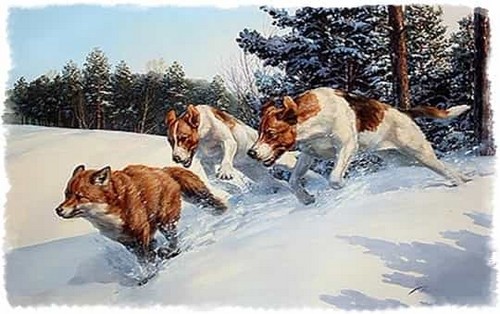 To hunt these cunning animals used two groups of dogs:

As hunting dogs are usually used hunting Terrier, Fox Terriers, and dachshunds-workaholic. From the man he is expected to be as careful and cautious enough. If the hunter will behave near the hole too noisy, the Fox will never leave your refuge.

Hearing, seeing and sensing the danger, the Fox will just hide in the farthest offshoot of the holes will be hard to protect against attempts of the dog to expel her from the house.

Approaching atnarko and dropped his dog into the hole, the hunter gently fades into 20 steps, chooses the optimal for firing position, takes into account all the nuances (wind, direction of running Fox) and is waiting for the beast.

Inexperienced foxes avoid meeting with the dog in the burrow, immediately after visual or other contact, trying to escape from the scene. Old, inveterate, on the contrary, try by all means to confuse their tracks, running through the hole and trying to confuse the burrowing dog.

In the snow Fox reluctant to leave their shelter if the weather is autumn or with a small amount of snow, it makes this more likely.
The complexity of Fox holes are different.

For example, if Nora is not old and excavated relatively recently, its size is not very large: 5-6 otnorot with den.

Smoke a Fox with such holes is not too difficult, a trained dog will bring the animal under the shot of the hunter. But if the hole was created a long time ago, and it changed more than one generation of foxes, its total length can reach 50 meters, you know that to work the dog in this hole will be harder.

And the most difficult type nor those that were dug by badgers and subsequently who took Fox.

Secondly the total length of the holes is a few hundred meters, and the third number unerkov can reach several tens.

It should also be noted the level of preparedness of the dog that plays an important role. Very important are the characteristics of the Norn hunting dogs as preservenet, toughness, experience and nastiness.

Fox hunt in the winter night with hounds can start with the first snow, as long as the foxes leave the forest and out in the field. This method of hunting requires more discipline, and also the maximum awareness of the rules.

One such rule is the number of hounds: there should be one or two, otherwise the Fox was very frightened. When the dogs chase the Fox, the hunter must not interfere they must not confuse their traces, because in this case, the hounds will easily lose the prey.

In other words, if You decide to hunt in the winter on Fox with dogs, hunting or hounds, you should consider all possible scenarios and prepare for the unexpected Fox.

Hunting will be successful in the following cases:

If cases when the Fox relaxes and falls asleep soundly small, but real cases of successful hunting in the overcast and windy weather very much. In the first place, the hunter must use a white camouflage suit, as he will have to move across open countryside.

Better if the Fox was seen on the nest, the hunter will explore the ravines, which are perpendicular to the wind. Often the Fox is on the leeward side, near the ravine and near Otvertka.

All the movements of the hunter should be as neat, quiet and sharp.

In that case, if the Fox got out of the blue somewhere in the bushes, the hunter needs parallel lines toward the Fox and bring us to within one shot to the first time to hit the target.