For this type of hunting choose only balanced and calm dog, as the moose is very big animal. For large animals dogs begin to teach until a few years hunting and working on them. Quite a large and powerful beast. Is representative of the deer family and is found mostly in coniferous and deciduous forests. The growth of some individuals is 2 meters and a weight of 500 pounds. Boasts a well-developed hearing, but smell and sight are developed much worse. The main reason for hunting is the production of meat, and in the second place, the value of his huge horns. It is important to note that without an official hunting license is poaching. Out in the woods against this beast unprepared is very dangerous, so take a little time and explore our recommendations.

How to choose a time approach

According to most hunters, the best time for this hunt is a cool day, must be the wind. In the winter, when it’s about -20 degrees and standing next to the trees cracking. Keep in mind, on a windy day, it is important to take into account the speed and direction of the wind. Although the smell of a moose is not very well developed, it is still no problem smells of the hunter, if he will not approach from downwind. But once the animal realizes that the danger is near, the hunt will be spoiled. You may have to spend another 3-4 days to find it.

Below is a video of hunting with dogs, it’s pretty short, but it will show highlights. Studying and practicing the chances of catching are getting bigger. In this format, hunting, plays a big role a dog, but rather its skills to hold the beast until how to fit a hunter. Properly trained huskies, obtaining prey, begin circling around it and bark. The task of the hunter is very careful to catch the beast to get close to him at the right distance and make a shot. You must do it carefully, as if the moose will be very scared, nobody can stop him, he will escape from the dog’s environment and run.

The process also involves tracking down the beast. If you search for location free way, you can achieve the opposite result and then all the animals will flee. Best of all, when 2-3 dogs start on leash. As soon as the hunter determines the recent whereabouts of the moose, he pulls the dogs sent to hunt down the animal trail. Get close to him, the dogs come in sight of the elk and then loud barking, circling and thus hold it in place.

What is hunting on a leash

This means that the dog is a person in pursuit of the animal. All this is done in silence, neither dog nor hunter shall not issue the sounds of their presence. For hunting on a leash, it is important to choose the most obedient, experienced, priravnennykh and great dogs. Their main task is to do its work silently without making any noise. The process assumes that all selected for this case the dogs were calm and balanced. Professionals say that security likes it can be cracking jokes with only 2 years to large animals.

The whole point of this method is reduced to a quiet exit for the beast. The conductor herself was a dog that quietly guides the individual. A hunter must observe how the dog behaves, what to do and where to look.As soon as the dog stiffened and began to take the owner aside, it means that she smelled the smell right and caught the trail of a moose. Hunter immediately change the course of its movement and go where they took a dog. The closer the dog to the animal, its impetuosity increases. If elk were in sight of the man, the hunter begins to sneak up on prey. It is necessary to make accurate shots, it is necessary to know precisely in what area to shoot. 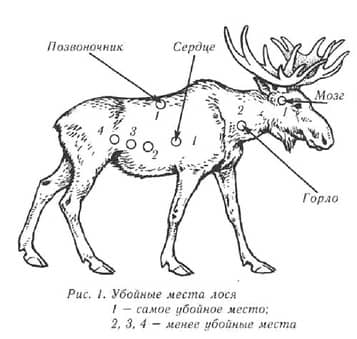 Hunting starts from September to end of December. The rules say that from September 1-30, you are allowed to hunt adult males. From October 1 to December 31, the hunting is conducted for all Mature individuals. In animals up to 1 year allocated the smallest amount of time from 1-15 January.The production of elk is permitted in the public lands where the legality of its conduct, you must have permission.

In the fixed land is required to have a permit with the permit to mine.In the case of the wounded animal the hunter is given a life size in 1 day, during which it needs to reach a wounded animal. If not, and elk not dobran, production permit is considered closed (used).Don’t forget that being in the woods with a firearm one must have a hunting license with a permit for the possession and carrying hunting weapons.

One of the best and most used guns in a hunting gladkostvol is the caliber of 12 and 16. Second, in turn, is used very rarely, so favorite 12 gauge. When elk hunting in Russia many use the bullet Poleva modifications having several varieties. 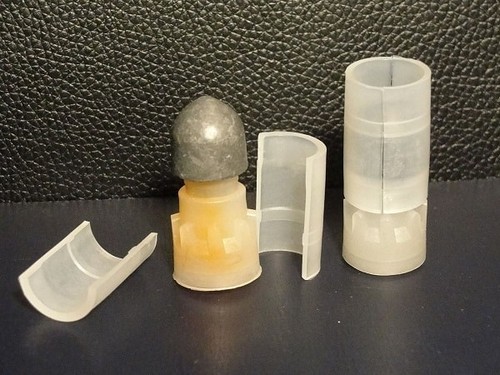 If you wish to increase the chances of a successful hunt you can use a rifle. When mounting optics to it makes a great tandem of accuracy and knockdown, multiplying the chances of success. Use the following gauges: 7х64, .338 winchester magnum, 8х57 JS, 9.3х64. When selecting weapons for moose not forget about the availability of ammo. Often get them somewhat problematic, although most often it comes down to their cost.

Today we talked about the trophy, about are extremely interesting and exciting method of its production. This requires a level of composure and patience. We are sure that following the tips, advice and considering all the rules, you will become a professional in this business. In the extraction of the elk Laika has been used since ancient times. Through endurance and sub-instincts, this dog is ideal for this method of hunting. Of course, no need nataski nothing good will come of it, all the positive qualities need to be nurtured from a very young age, to join the hunt. Poles in combination with the viscosity of the breed will not leave without a trophy.