Maral – one of the species of red deer, which is a prized trophy for any hunter. This animal is found in the Altai region, Krasnoyarsk, in the upper reaches of powerful Yenisei river, on the slopes of the Tien-Shan and Sayan mountains covered with forests.

Deer hunting is strictly licensed, so the year produced a limited number of old males.

The antlers exports to China brings a good income. Rampant fashion to treatment with funds obtained from the horns of deer in the last century, led to the fact that the population of this graceful animal has decreased.

In Siberia and Primorye, the government organized a stag breeding farms – farms that contain and breed deer. There is the removal of the antlers for sale. 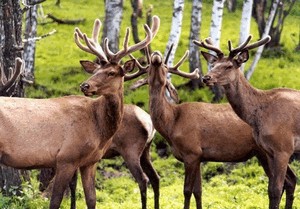 This type of deer is larger than all the other canines and reaches a weight of 300kg. At the withers – up to 1.6 m Beautiful, stately animal has dark — brown hair. Near the tail, is preserved in the sacral area is the stain lighter colors.

Meat and skins are highly valued, but the big prize antlers. This young horn, regrown after the reset, the old. At the end of February starts their growth. By may spring horns get the greatest value. At this point they are quite soft, permeated with blood vessels and, according to Chinese healers, have a high biological and therapeutic value.

The doctors in China believe that the antlers treat infertility, have a strong stimulating effect, facilitate the birth process. In China every bride in the dowry simply must have a slice of whole antlers or horns.

For removing the spring horns there is a certain period – from may to the month of June. Later, the horns start to stiffen, and their value is lost.

Elk hunting during the rut 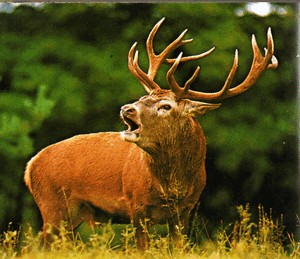 This kind of hunting for deer is held in autumn during the rut. Amid the crimson leaves are “jousting tournaments”.

Invitingly sound of the trumpet voices of the males that cause the opponent to a duel. The reward is the female you want to win, becoming the winner of the bout. Horns horns, deer face off. The spectacle of vivid and exciting.

Cautious, intelligent animals that have excellent eyesight and hearing, forgetting about everything except the battle over a female. They are ready to race at any sound resembling the roar of a rival or a call DOE. These are hunters.

Hunting for Reva is best done together. Assistant with a special semolina makes a sound that attracts deer. With a throaty roar that rushes in the direction of the sound, after it stops, sniffs the air, assessing the situation. The deer is facing directly at the hunter, waiting in the wings with a gun.

Special care is not needed. You need to approach from downwind. For the roar of an animal to determine where the largest male and choose a trophy.

Maral – strong and tenacious. To beat him better bullet. Caliber – not less than 7mm. you May need a second shot – be ready for it. Hunt good day, in dry and clear weather.

Video where you can see how to lure deer for hunting Reva. Pleasant viewing. 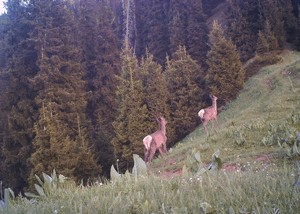 Hoofed animals every year drop their antlers and need the minerals for the recovery of the horns and bones. In summer, animals need salt, which she found on the salt marshes.

These are hunters and equip artificial salt licksto watch for deer, when he would taste the salt. Briquette weighing up to 10kg will be enough for the whole season, which lasts all summer.

Place the briquettes in a quiet place, away from roads. Next is equipped with a storage shed or the blinds. Take into account the wind direction. Labaz camouflage with branches and trees.

The height of 3-4 meters will protect the blinds from the bear, who also loves salt. Near Solonets not follow that the beast did not smell human.

Towards evening the hunter hides in ambush waiting for the emergence of deer. When a deer eats salt, it loses its vigilance. You need to aim and just shoot. Dead animal away from the salt lick to keep the blood scared away the other deer.

In one place you can get several deer. If the hunter does everything by the rules, he can come to the same salt lick and go back home with the loot.

We offer You to watch a video on the deer at the salt licks. Pleasant viewing. 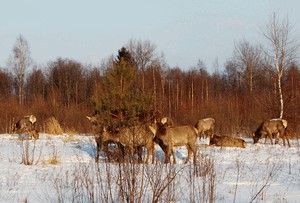 Winter deer hunt in different ways. In deep snow practiced battue hunting. In the group allocated beaters and hands. The first chase of the deer, which bad moves in deep snow, in the direction of the arrow. The fact remains accurate shot to hit the prey. It is important to be quiet and careful.

Of the blind or of the blind to get the deer in the winter more difficult. But more fascinating is the process of extraction of the noble animal. Fresh snow helps the hunter to read the signs.

On a deer hunt in the winter with the approach, but this requires a small layer of snow. In winters you can hunt, but chemotrophy hard to keep a wounded animal, traces of which are lost.

in winter, from the tower gives a person an advantage, allowing calmly to aim. Standing nearby observers may remove the hunting process on camera. The tower is equipped in the feeding grounds, next to a road or open area.

Maral – noble and intelligent animal. The opportunity to hunt it is a real luck for the hunter. It is important to remember that this animal is quite rare. Respect for the rules governing the shooting of deer.