Early morning, gun at the ready, and flocks of ducks returning to their homes. This is perhaps the most romantic for a hunter period. In the spring there are only two ways of hunting for duck hunting and decoy with stuffed.

Hunting for duck in the spring is considered a classic spring hunt. Any book about hunting necessarily contains a section dedicated to this type of hunting. 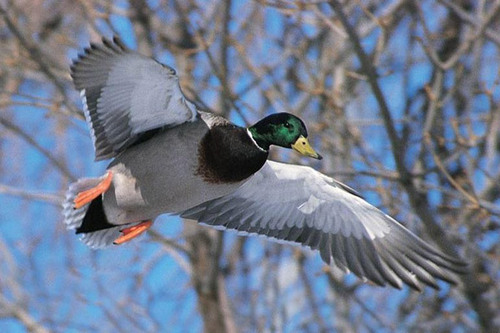 I think that every hunter I read about this hunt many times in my life, but not everyone’s been on it, so today we will talk about how to prepare and conduct the hunt on a duck in the spring.

When talking about Drake, I immediately in my thoughts I remember the male mallards with their colorful plumage during the spring migration of birds.

Every day during the breeding season is worn across the lands to find the female for mating. Visits mostly swamps, lakes, rivers, and even places with the presence of melt water, where ducks like to swim.

Hunting for duck with stuffed

Despite all the appeal of hunting with a duck decoy, most hunters no opportunity to grow and contain the bird. So the becoming more popular replacement decoy Scarecrow. Today in hunting stores sufficient selection of duck stuffed animals for spring huntingfor a duck, both domestic and imported.

The most popular rubber stuffed for spring hunting– they are easy to transport, good balance on the water more than others resemble a real duck. Among their shortcomings are not always the correct color on the rubber to transmit more complicated than, say, plastic.

Plastic stuffed duck in the springis also produced, but they are considerably inferior rubber during transport, they do not wrinkle, and therefore, occupy much space. In addition, they are lighter than rubber stuffed, and therefore, with a small ripple plastic effigies are not moving quite naturally. To solve this problem at the bottom of the product are balancers, but it does not always help.

Doing for spring hunting wooden effigies, often at home. They are less comfortable – heavy and bulky, but looks, in a good performance in no way inferior to rubber and plastic. And for some it’s a way to save money. 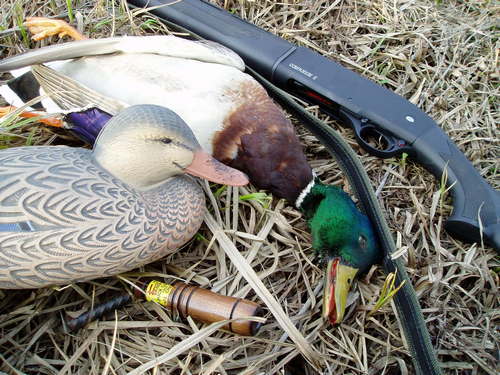 Special craftsmen are doing hoursof UCLA to hunt for duck in the springof foam stuffed is formed in a plaster form. From one bottle of foam turns 5-6 mallards — cheaply and efficiently.

If desired, the spring hunting effigies can be set, and when using a decoy– it will attract more drakes. First, you need to plant dummies, and only then duck – otherwise cry it ahead of time will attract the drakes, and the hunt will be spoiled.

The most effective use of stuffed animals on extensive areas of the lake or river, devoid of high vegetation where ducks and going on a day’s rest. Such places are not hard to identify, if at the morning dawn to pay attention to the direction of the summer flocks of duck, and a weird low-flying ducks – a sure sign that the place dnevki close.

In windy weather effigies should be planted under the protection of the natural cover(beach, walls of reeds) otherwise your bait will be hanging out on the waves and unlikely to attract drakes. Another not unimportant fact that the effigies are planted with respect to the direction of the wind, as the drakes flew to the stuffed animals against the wind.


The more the hunter will drop the stuffed— the better, the best option — 10-15 stuffed having a size, shape and posture calmly sitting ducks, at a distance of 1 – 1.5 meters. Part of stuffed animals needs to be painted the color of drakes.


Spring hunting for duck with a duck decoy

Hunting drakes with a duck decoyis one of the most exciting hunts of the spring season. Shooting in years is totally unacceptable, because from a distance you can confuse male and female – in the spring you can shoot exclusively at the drakes.

Decoy, Mallard duck or circular is domesticated in the distant past wild mallards. By the purposeful selection and breeding of the ducks, for hunting purposes and have the necessary qualities. Growing decoy is an art that sometimes takes more than one year.

One of the main advantages of decoy is the voicewith which she informs the brothers about your presence and calls them to himself. However, in sound, in pitch and timbre of the voice can be quite different. Some serious hunters, especially those who are interested in hunting with decoy, decoy meditiruet with wild Mallard ducks, to ducks low and short rainfall (sediment — rapid rallying cry). These ducks first generation are rarely suitable for hunting, but after a generation or two from these beautiful ducks with a low pleasant voice, and very short rainfall.

Decoy duck (usually a cross between a Mallard and a home) sits in a Creek, swamp or other place where you want to lure the duck. At a distance of 15-20 m from cover in the bottom of the reservoir to drive the peg to the upper end of which is attached a wooden swivel, to which the leg is tied a decoy duck. The fact that the swivel turns freely allows the duck to swim, not spooling the rope on the peg. Instead of a peg you can use regular sinker that can hold duck in place. Useful in the offing to throw a couple of logs on which duck will be able to relax and dry off in the sun.

If a plant is doing badly, then the arrow should be taken with a hunting decoy, and imitate them conscription quacking female. Do not continue to attract the Mallard, if he had already turned to the call, because at least hypocrisy he will fly away. Hunting is best done on lakes covered by forage vegetation.

If you use two decoy, you need to put them away each other, otherwise they will not be screaming. To prepare for the hunt – land duck and climb to the hut should be dark, in the twilight drakes come to a call of a duck is much bolder.

Here, your duck well done, and not far from her sat a duck. Now it is important to immediately shoot him, before he will swim very close to the duck, if you don’t want to hook shot your decoy. In addition, you need to shoot once more and due to the fact that from the water the duck is easier to notice the hunter and fly away.

Sunrise years the ducks gradually weakened, by this time the drakes have found a couple, but by 9 am, and at all ends. The flights and the cries of the drakes are particularly persistent, when the females sit on the nest. And therefore, and spring hunting during this period more profitable. For shooting drakes most appropriate fraction number 3, 4, 5. 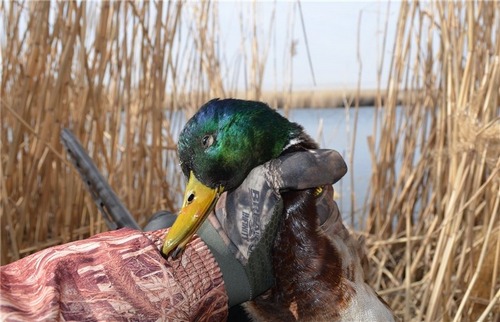 Of particular importance at the spring hunting for a duck is a camouflage of the hunter, which is of two types: either a tent or a camouflage Bathrobe. The tent needs to be spacious enough, and carefully disguised with branches, so as not to stand out in the surrounding area. Masking is preferable to use a natural plant material, but in any case not hay – it can quickly take the wind. In place on the walls of the tent were left with holes and loopholes. The hut is set on the waterfront, on remote Islands, and sometimes on rafts. In the boat to fit the tent is problematic, so hunting from a boat using a cloaking robes. To determine which robe is better is difficult, because everyone has their own preferences. Someone more like the coloring “under the camouflage”, and someone bathrobes like “hobgoblin” or “the devil”. Each of the options-its good and convenient in certain circumstances.

The first task of the hunter on this hunt is to find those water bodies where fly drakes and build them a hut from which you will be hunting. Itself shelter must be done so that it is similar to surrounding vegetation and do not cause suspicion on the part of Drake. If You plan to hunt anywhere on the pond with lots of reeds to build a hut, too, need from canes to camouflage was on top.

When hunting in close proximity to coniferous forests, that shelter made of pine branches, which makes the tent less visible and does not cause suspicion. The distance from the place where to sit the hunter and before the expected landing duck to water, should not be more than 30 meters. Usually it is from 25 to 30 meters. The tent should be completely closed from all sides so that there is no place to even look. Be sure to make a small observation window, which will observe the ducks and shoot the duck.

Here You have found a place, built a shelter and I know that ducks fly. Now we should consider to take along on a hunting decoy duck that would quack, and to lure the drakes, and then You shoot according to the licenses.

Decoy duck very often, hunting offer hunters a certain amount, but there are hunters that are grown on their own at home such weft and raising them to behave in the hunt.

Decoy You have in hands now, care should be taken in order to correctly put in the water and secure in place so she couldn’t fly away and far.

At the foot of a duck wearing a special bracelet made of leather, and tying it to a rope. Further, the other end of the rope is fixed to the peg and stick it in the bottom of the reservoir.

It is very important that the duck was free to go ashore and to return back to the water, so make sure that the rope was the correct length.

For better effect it is recommended close to the decoy to accommodate a few stuffed animals so that the duck was unable to reach him. In addition, brass whistle on this hunt just a plus.

As a rule, hunting for duck in spring is early morning or evening, so you need to arrive to the hunting area in advance: in the morning before sunrise and in the evening before sunset.

Shoot the duck is recommended by the fraction number of 4.3. If the male gets a little away from the females, you should not wait for him to swim to it. Shoot immediately, if the distance allows, but remember not to touch the decoy duck.