Hunting with hounds on a hare is a great way to cheer up, to feel the true thrill of the hunt, spend time in the company of enthusiastic people and return home with a deserved trophy. Hounds do hunt bright, noisy, exciting.

Goncharnyi special, enthusiastic people, who can not imagine life without Hiking through the forests, steppes with his loyal assistant – a sensitive and faithful hound. Hunting with hounds has many features, which should know the beginner hunter. .

How is hunting with hounds the hare 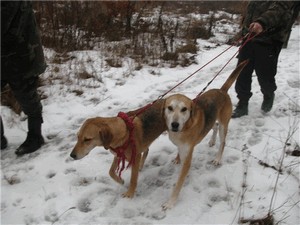 Genetyki rarely go for the hare alone. Like-minded people together and go hunt friendly team. Noisy, invigorating, many hours hunting with shouts and porsangen, whet hunter and dog gives a lot of positive emotions and excitement from catching prey.

Hunting with hounds is suitable hardy people who are willing to go a dozen kilometres away, following a tricky beast that goes in circles, and then tangle the traces. The essence of hunting is to find the rabbit in prone to get him to break from a familiar spot and the voices of dogs, pursuing him, to guess the direction of movement.

The hunter needs time to get up there, where they will persecute the hare-trained dog and a well-aimed shot to finish it.

But standing still is not necessary. Rabbit – likes to zigzag, make dvoiki and clever twists and turns, to confuse the trail. Hunter constantly have to move or freeze at the first sign of approaching hare, which is driving the dog. Bored and do not have to relax. Wakes up the excitement – who will win?

Hunting has its own characteristics, should know about hunter:

The beginning of the hunting season 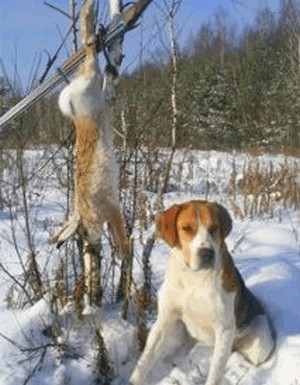 Hunting season with hounds opens in the fall, starting in mid-October, in some places, for a fortnight later. The end falls on snowy, cold days, and starts at chemotrophy, when the earth is no snow.

Masters believe that it is necessary to catch the dog in the black path, so she can’t see rabbit tracks, and focused exclusively on smell. If a young inexperienced dog will get used to look for visible marks on the white trail, look for a hare at chemotrophy it will be very difficult.

Motley trail when snow covered areas are mixed with mud and melted snow, is very difficult to hound. She has all the time to readjust from one trail to another.

Goncharnyi long sleep. Hunting out just before dawn to before sunrise to find fresh tracks. Need to know where the most often in this area hares satisfied with maturation. Noise should be a lot to the hare moved. As soon as the dog starts to chase the beast hunter takes his place.

What should be a good hound

Good instincts – the first sign that distinguishes a real hound. Rabbit’s scent glands located on the paws, and sniffing out hidden beast dog pretty hard. If to drive away his surveillance, hound begins to smell a rabbit and chases it.

The dog must be hardy, hard to chase prey. To develop persistence, you need to constantly catch up with the dog to gain experience and skill.

It is important to remember that the hunter and dog are equal partners. Only the cooperation of man and dog will bear fruit. You can’t treat the hound like a maid. Trusting relationships – the key to successful work in pairs. Indifference can destroy even the makings of a thoroughbred hound.

Every hound needs to deal with the hare. Hunter in time makes the tips of the dog if she had difficulties finding the trail.

How to train hound for hare

Training carried out all year round. The more varied the tasks the better. For hound need regular exercise. A run with her in town, the dog’s stuffed paw pads. So it will not knock them to the blood in the forest or expanse of the steppe.

To develop stamina, the hunters leave on the bike, and hound at a certain speed it runs alongside. No need to make the most of.

From a dog that drives with great speed, the hare will run away just as quickly. At slow speed the scythe will constantly stop, listen, and shooting him would be easier.

Please note: on the track had smaller cars, so the dog does not fell under the wheels.

The dog must be trained to smell a beast and hard to drive it. Training starts in 10 months. Younger dogs don’t train – they are unable to even weak curvature of the limbs (“fall for paws”).

Training starts in the springtime when rabbits mate, and on wet trails there are many of them odorous emissions. Go early in the morning when the tracks have not drain..

Important: in the spring and summer to be with dogs in the hunting grounds is prohibited. Scolding the dog in the designated areas.

In early autumn, need to catch up with not only youth, but experienced dogs, so after the off season they are again “filled the paw.” Hound — prosenica can ensnare wounded animal that will give her confidence. Do not allow to have a hare.

As a reward, let the dog Pasenko – cut paw. Reward the dog after each killed rabbit.

The habits of the hare 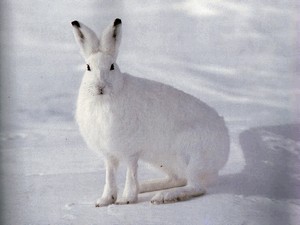 The hare lives in forests, open space out often. Leaving from prosecution is also a forest. He liked the clearing, Gary meadows, where there is no solid areas.

The circles of the white hair smooth. Young hares confuse the hound, making a ragged circles, in case of danger leaving in the direction. At the rustling leaves Whitey is not running – afraid of the noise. Making a couple of circles, a scythe on his way back to the nest, and there he was already waiting for hunter.

Hunting with hounds on a hare 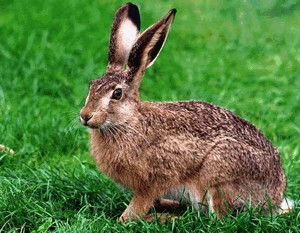 Rusak does not love the thickets, windbreaks, impenetrable thickets.

The hare is a very cunning, is its own trail twice, reduces the size of the footprints, which are more elongated than the hare.

Often the hare is thrown off from the trail and looks like a hound looking for him, and he quietly returns to the place of maturation. It is here that it needs to guard a hunter.

To hunt was successful

How to keep hound from wolves

In the hunting grounds may be wolves. This fact cannot be discounted, to avoid tragedy. Wolves are cunning and dangerous animals. Sensitively catching the range, he can attack the hound practically in front of the owner.

To protect the dog from attacks, experienced hunters recommend you hang on the dog’s neck the discharged shell, smelling of gunpowder. Fit a bell and a red rag, which extend through the barrel, storing traces of gunpowder. But don’t make the cloth too long to not hound caught it for the branch.

Some RUB the dog before going out shirt, then smelling to scare away the wolves by the smell of the hunter.

To hunt with a hound on a hare was successful, well prepare a dog that will be your faithful friend and helper. Avoid mistakes, follow the rules of hunting, and fortune will smile upon You. Tired but happy, You will long remember happy and hot moments of hunting for the oblique that You still outwitted.