Hunting in the fall is the most numerous in terms of the variety of methods and types of hunting. This season actively begins the migration of most birds, for which hunting is permitted.

In late autumn many hunters I meet those birds, which in the rest of the year just to meet their hunting grounds as the habitat of such birds is thousands of miles from the homes of the hunters.

In addition, in some regions, begins the hunt for the hare, which has a huge number of fans. Millions of hunters go to land to raise beds eared rabbits.

For owners of hounds of autumn is a double celebration, because on the hunt now take gonchakov that his gun delight the ears of hunters and have a brilliant help on the hunt in the fall.

Geese huge flocks fly all new territory, where they opened a real hunt, but mine is not that everyone of the hunter.

Autumn is not complete without the hunting for wild boar. Organized battue hunting this big game involving dozens of people. Such activities are impressive not only ordinary people, but also hunters, who have many times been on one of these hunts.

Attractive than hunting in the fall? 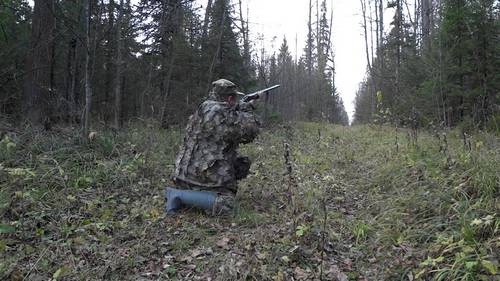 The main attraction of autumn hunting is its variety, which is not in other periods of the year. Can go hunt the goose and shoot the hare. In the autumn the opportunity arises.

Basic hunting at this time still applies to migratory birds, which appears countless. Hunters have resorted to different ways of hunting to get an exotic bird.

Duck hunting in autumn in nature is considered to be the most popular. Flocks of ducks of several dozen individuals filled the local ponds. In most cases, the easiest way to get these ducks on the water do they caution at altitude.

The hunters start to use the stuffed monkey to get to the pack a little closer. As a rule, before dawn doing the arrangement of stuffed animals on the water in an amount of not less than 20-25 pieces.

With the first rays of the sun among the morning’s silence is heard the sound of semolina, which attract migrating ducks to the place arranged stuffed animals.

Goose hunting in the fall is a little different from duck hunting because geese mostly mined in forage fields, where they hide, put the stuffed monkey and used.

The geese have their own particular routine. When they fly to feed in the field, there are already hunters waiting for them in a state of readiness to fire.

To hunt geese need more experience and good training in terms of equipment and ammunition, because this bird is very smart and careful.

Other types of hunting in autumn the birds are not so popular, but is practiced among the fans, so I think it necessary to call them.

For example, hunting for capercaillie and black grouse in the fall in its essence has nothing to do with duck hunting because these birds live in other places and not fly South.

Hunting for partridges and pheasants are also unique, because these birds live permanently on the territory where they were born and do not migrate in autumn to warmer climes. Learn more about hunting them you can read in other articles on the website.

The hunting of the hare in the autumn with a hound gives the start of hunting fur-bearing animals. The lack of snow makes it very difficult for hunter searches hare and his persecution, so the hounds really make it easier for the extraction of a hare.

Thus, hunting in the fall is very multi-faceted and there are plenty to choose from, it is possible to hunt not only birds, but animals of almost all types of hunting.