Pakistan is one of those countries where mountain hunter can dramatically add to the list of their trophies. Leaving in the next expedition to this unique country, I had planned to get two trophies: sulaimankulov markhor and Afghan urial. The hunt was planned in the region of Quetta, Balochistan province, on the border with Afghanistan. 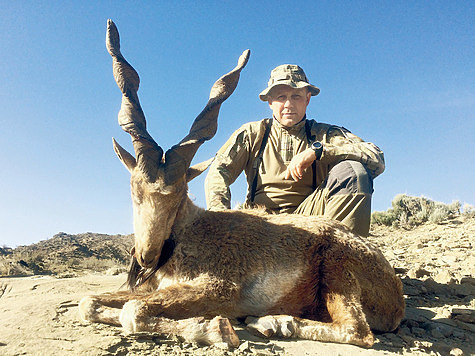 Horns markhor doing two or three or more rotation around its axis. Photo Of Edward Bender.

At the airport I was met by servants who kindly and very carefully examined the contents of my Luggage.

This time, I flew to Quetta without weapons, as the organizers promised to give me a choice of several rifles.

The fact that all customs formalities with weapons in Pakistan are held only in Islamabad airport.

Save time and busy schedule forced me to abandon my rifle in favor of a rental.

His shirt, of course, closer to the body, as they say, but experience allows us to adapt quickly to what is at hand.

I got a light mountain rifle caliber 300WM with tolerable 14x eye “Leupold”. Sighted the weapon at 200 meters to zero, I decided what marks to shoot at a distance of 300, 400 and 500 meters, but this is in extreme cases.

The road from the airport to the base camp took about five hours. Along the way we met a small camp of nomads, all the property of which is sewn from rags awning, escape the scorching sun.

Under him they live all: children, adults, and livestock is the main asset of the family. So they migrate from Pakistan to Afghanistan, and onward to the border with Tajikistan in search of fresh grass for his sheep. Little dirty kids running barefoot through the scorched earth, playing with the newly born lambs.

These people live in another, distinct from many of the coordinate system and values, and happy in their own way. 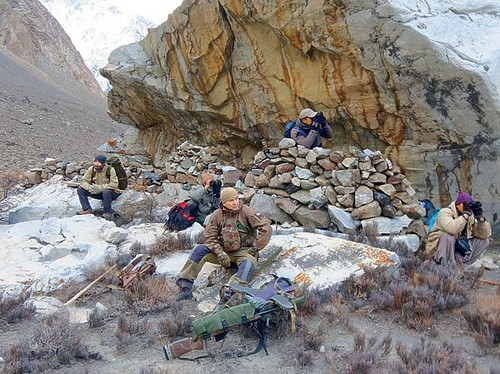 In base camp we got about twelve days. It was a clay building with many rooms. Hunters were given the room with the stove, and even a separate toilet. It’s simple, and even comfortable for the mountains.Any mountain hunt is 80% of the discovery process of the beast on the slopes. The photo shows a pre-prepared shelter for hunters, probably built for driven hunts. Photo Of Edward Bender.

Time to lose was left, so we quickly got dressed, then followed by the sighting and access to the mountains in search of the first trophy sulaimankulov markhor. A quick hour and a half lifting, and here we are at height of 2900 meters.

Cool, but because it is in these areas and is inhabited by wild mountain goat. As always, with me was a large group of people, who are actively searching animals.

The first group of three males peacefully resting under the rays of the spring sun, we noticed quickly. The distance was about 500 meters. From the carbine, I, of course, would be immediately shot, but to shoot at such a distance from another was considered a mistake. Huntsman suggested that I relax.

Their tactic was to wait until the animals start moving, and then, depending on this, as well as the direction of the wind to start to conceal. Rest in the shade of a large stone was not long. Half an hour later, the animals rose and went, but, unfortunately, from us.

All attempts to catch them, rounding a nearby ridge, was not successful. The markhor as if vanished in the mountain range. Sometimes you wonder how fast in the mountains environment is changing and how being seemingly close to the animals disappear without a trace.

For us this meant further active search and many hours walking through the rocky mountains. Can’t say that they are very complex, but a series of ascents and descents makes itself felt, especially in the first day of running.

About five o’clock in the afternoon, it was decided to start back. It was getting dark. In the soul cherished the hope of meeting the animals on the way to base camp, as has happened many times. At such moments in the hunter’s head walk thoughts on the level of prayers. 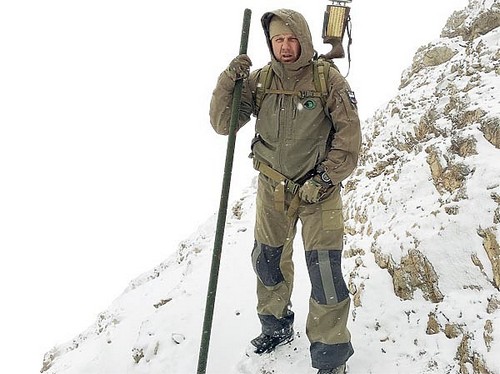 The slopes of the mountains in Pakistan is very dangerous, especially in bad weather. Photo Of Edward Bender

Shooting at a steep angle about thirty-five degrees is not a very easy task. The shooting distance was about 300 meters. With the adjustment for the elevation of the target I deducted 100 meters, and the total mark of sight was 200 meters, they have the rifle and sighted.
We actively looked for and evaluate trophy quality potential prey. In the end agreed to shoot. The search began for a suitable position.After some time at the radio station one observer reported that he saw a group of markhor. All noticeably brightened, began active negotiations and adjustment of the direction of extension.
After fifty minutes of running we came to the desired slope and occupied a strategically important position at the top. Ten minutes later saw a large mixed group of animals — females and cubs and a few males. Wind in the afternoon is the bottom, so we had nothing to stop it.

Next was a breath and shot. All. The trophy was taken. Joy knew no bounds. Wow! To get the trophy markhor in the first day of hunting! Less than a day, and half the work is already done, one trophy produced. And tomorrow morning we will try to find and get the second trophy Afghan urial. 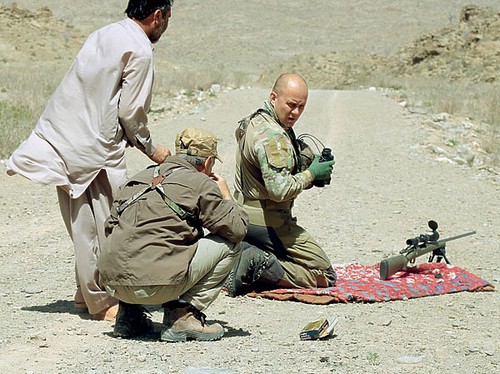 Each hunt begins with zeroing of weapons, especially a stranger. Photo Of Edward Bender

We left camp around six in the morning and half an hour later found the two males coming down for feeding. On the assessment of the route and the nomination went no more than thirty minutes. During this time we managed to go unnoticed at a distance of 150 metres, and, as they say, a trick. In the end, the trophy was taken.Feature hunt in March is that at this time in the lower part of the mountain massif rises young juicy green grass, and the animals went down in the morning to feed.

Since my landing in Quetta it took 23 hours. To say that all went well — to say nothing. But let you do not get a false impression about hunting in Pakistan.

The week before I spent hunting in the country for ten days, five of which reached the place: three days driving, and then there was a two-day 35-kilometer hike in the rugged mountains at an altitude of 4000 meters under constantly falling snow.

And only on the sixth day was held labor hunting of blue sheep. And the hunt for Kashmir markhor, and all were unsuccessful. Two days of searching and climbing steep rocks to no avail, same trophy males, we did not found.

Had to return to Moscow as scheduled hunting time in Quetta permission was not obtained.

And only a few days later took place the return to Pakistan and described above happy hunting.

There are two interpretations of the name goats: markhor — markhor. Translated from Farsi mar is a “snake”, and kbor — “devouring”.

Markhor literally translates as “goat eating the serpent.” In the Pashto language, one of the peoples of Afghanistan, mar means a snake, but the word akbur — horn.

This option seems more convincing, and thus horned goats can be called animals, which are snake-like horns. Modern Latin name Capra falconeri: markhor goats was in honor of the Scottish scientist-naturalist, Hugo Falconer.

The horns of males and females markhor twisted into a spiral, like a corkscrew, and the right horn is twisted to the right and left, respectively, to the left. The usual number of coils from two to three.

The base of both horns are close to each other, above the horns diverge. The angle of divergence varies with subspecies, but symmetry is preserved in all animals. Males have a luxuriant beard, thick fur on his chest and neck.

Main color is sandy-reddish or gray-haired. Hanging from his chest fur is lighter than the base color, even whitish. The anterior surface of limbs covered with black stripes.

The markhor are very large animals. The length of their body ranges from 140 to 170 inches, a height at the withers reaches one meter. I should say that the males twice more than females. 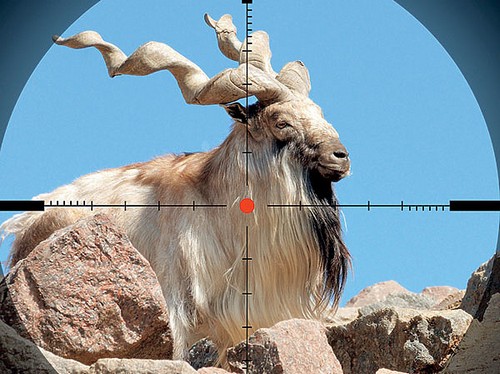 The markhor currently live in Afghanistan, Pakistan, India, Tajikistan, Uzbekistan and Turkmenistan. As a result of military actions in several countries and poaching, the number of horned goats was significantly reduced.In winter the markhor active all the daylight hours. Summer grazing at night, early in the morning and evening

According to recent data (2011-2013), throughout the area there are about 8800 markhor. Because some areas were not included in the credentials, we can assume that the number of horned goats on the planet is about 9700 species.

Currently regular hunting of markhor conducted only in Pakistan. It is estimated that in this country there are about 4500 three markhor subspecies. In some regions there is a stable increase of local populations.

Horned goats inhabit a hilly terrain with steep cliffs at an altitude of 600 to 3600 meters.

The markhor are mostly diurnal, but most active early morning and late afternoon. These animals try to avoid places where a large depth of snow. Females usually produce one or two baby.

The animals become sexually Mature at 18-30 months, and live to 12-13 years. Horned goats have excellent vision, excellent hearing and sensitive sense of smell. Their main natural enemies — the wolf, snow leopard, lynx and the Golden eagle.

Today, all subspecies and populations of horned goats removed from Appendix II to Appendix I of CITES in 1992. Tenth meeting of the conference of the parties to CITES in 1997 passed resolution with the annual production quotas of six markhor in Pakistan.