One of the most interesting types of fish are deep-water fish. Life at these depths, under enormous pressure, almost complete lack of light and algae is not terminated. Evolution has created in the water strata, these whimsical, strange and sometimes scary creatures that one can only wonder. Look at some of them. 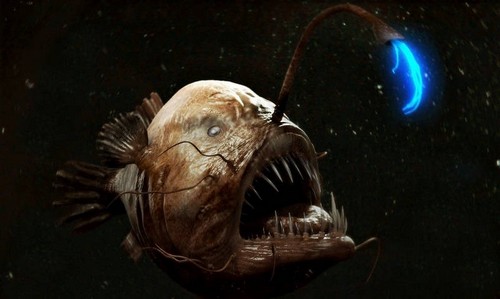 Sometimes this suborder called ceruletide fish. They are quite numerous in the oceans there are more than 100 different kinds of anglers. Deep-water representatives of this family live in a three-kilometer depth of the water column, do not have scales, and the families of their reigns aggressive matriarchy.

Hunter and producer of deep-sea predators is female. Its first dorsal fin ends in a so-called “rod” — a glowing lure, which the female anglerfish attracts prey closer and closer to his mouth until finally gets a chance to eat. Glowing body parts of deep-sea fishes is a common phenomenon, this effect is achieved by the special glands of the fish, which live a symbiotic method special bioluminescent bacteria.

The male deep-sea anglerfish is a parasite. It is not a curse, but a biological concept. The males of these fish are much smaller, do not have their “fishing poles” and therefore can’t hunt. So this male is a parasite on you its female, attaching her mouth to the side and grow together with her lips and tongue.

Another name for — glowing anchovies. Ubiquitous, living “upstairs” angler fish (at a depth of about one and a half kilometers) to float and glow. However, their ability to illumination differs from the similar properties of the same deep-sea angler fish.

Mikrofalowe anchovies glow in different colors (blue, green and yellow) due to chemical reactions occurring in fotocity the cells of their body. On a small body of anchovy is 4 types of such luminous bodies, and all colorful.

Anchovies feed on zooplankton, which is mined, fearlessly rising almost to the surface of the ocean.

And almost at the ocean floor, in the cold and the dark to live a more interesting fish: the sea bat, fish-tripod, mesaglut, the famous fish with a transparent head that has the ability of 360-degree review, the fish-drop, sabertooth and others. These fish quite a lot, it’s like breeds of cats — like the cat, but they are all different!